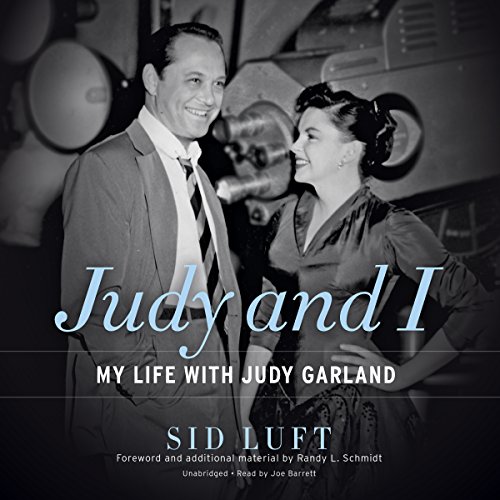 The third of Judy Garland's five husbands, Sid Luft was the one man in her life who stuck around. He was chiefly responsible for the final act of Judy's meteoric comeback after she was unceremoniously booted off the MGM lot: he produced her iconic, Oscar-nominated vehicle A Star Is Born and expertly shaped her concert career.

The romance lasted Judy's lifetime, despite the separations, the reconciliations, and the divorce. Under Luft's management, Judy came back bigger than ever, building a singing career that rivaled Sinatra's. However, her drug dependencies and suicidal tendencies put a tremendous strain on the relationship.

Sid did not complete his memoir; it ended in 1960 after Judy hired David Begelman and Freddie Fields to manage her career. But Randy L. Schmidt, acclaimed editor of Judy Garland on Judy Garland and author of Little Girl Blue: The Life of Karen Carpenter, seamlessly pieced together the final section of the book from extensive interviews with Sid, most previously unpublished.

Despite everything, Sid never stopped loving Judy and never forgave himself for not being able to ultimately save her from the demons that drove her to an early death at age 47 in 1969. Sid served as chief conservator of the Garland legacy until his death at the age of 89 in 2005. This is his testament to the love of his life.

What listeners say about Judy and I

It’s all about the author - one of her husbands

He’s a pompous ass who try’s to tell a story of what a great guy he was to Judy, when he was no different from the rest. They all abused and used the poor sorry full girl, who never had a normal life as a young adult. Not enough story about Judy.

So why the 4 stars? The depth and breadth of information provided offered real insight into Judy Garland’s life. I ended up truly disliking Sid Luft and with little effort could see through his flowery language and constant affirmations of love. He loved her money, period. His need to push her endlessly, feed her medications although he claims to “manage” them and then try to steal her children, when she was too sick to support them, will make your heart break.

If only a life preserver of sincere concern during her darkest days had been thrown to her, I believe Judy’s life would have been less tragic.

This book was interesting and certainly painted a different picture of Sid Luft than has usually been held. I found it odd though that the filming of "A Star is Born" was almost completely glossed over. Still it was a tender commentary of a man who loved his wife through troubles and triumphs and a work that certainly offered layers of humanity to two people who Hollywood and time has had a tendency to turn one dimensional.

Sid stuck by Judy for so long. Living with Judy got to be more and more difficult.
The narrator really makes it makes it seem like you are listening to Sid telling you a story. This is a must for Judy fans !

getting by on a song and a prayer

great storytelling from Sid Luft about his life before and during their time together. extraordinary glory and misery.

Absolutely loved it! One of the best biographies!

If you are a Judy Garland fan this audio book is a must have! What an incredible life Sid Luft had.

Interesting but not great

I liked this book and feel he had an interesting life. I did not know most of the information about Judy he talks about in his book

He really pissed me off as he was just like all the others in Judy's life. They knew that if they pushed her to go back on the road she would start using again and yet they all pushed her over and over to go back on the road with tours even though she would get clean and start to be happy and healthy. If any of these people loved her they would have never have done that to her.

What I did like it that Judy sounded like a great person to know and hang out with and she was a hoot according to his book. It was strange tho how he never really talks about the kids. You would think he never had any with Judy being he only talks about Liza once of two and nothing about Lorna or Michael.

This was a wonderful book. There were many nights that I stayed up much too late because I could not stop listening to it. I think Sid Luft was a very powerful Influence in Judy’s life and heaven knows what her life would have been without him.

The narrator did a magnificent job carrying the reader through the brilliant talent and tragic soul that was Judy Garland. While a bit slow in the chapters about Sid's life prior to his involvement with Judy, those are few and Judy is central otherwise. Bottom line, it's an amazing, compelling, and complex Hollywood love story.

intriguing...well told with so much love and concern nice to be able to know her husband l8ved her so much

Absolutely Recommend This fabulous book! It really gives an insight into both their lives whilst keeping you on edge i’m not a huge book fan but this is really easy to listen and keep interested throughout