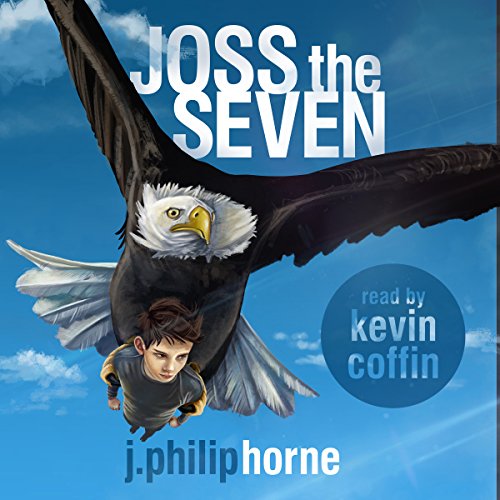 New powers. Big problems. Joss Morgan loves joking around, but it’s no joke when he discovers he has superpowers. Those powers could get him killed.

Heroes and villains want Joss to join them. Both will use him. Everyone has secrets. And his life isn’t the only one on the line. If Joss can’t figure out who to trust, his whole family could die.

"Soundly crafted and well-paced, this is a story that'll keep you turning pages late into the night." (Marc Secchia, best-selling MG/YA fantasy author)

Fourteen-year-old Joss Morgan loves a good prank, but the joke’s on him when he discovers he has superpowers. He quickly learns that with the new powers comes real danger. The Mockers are coming for Joss, and he doesn’t know why, or even who they really are. He only knows they mean trouble; deadly trouble.

The Guild of Sevens, a secret organization of people with powers like Joss', sends Mara to train Joss in his new power. She uses him to fight back against the Mockers, but nothing adds up, and pretty soon Joss is wondering which side he’s really working for.

When the Mockers arrive at his home, Joss is out of time. He sets up a high-stakes prank to save his family. This time he knows that if he fails, he won’t end up in the principal’s office; he’ll wind up dead.

"Soundly crafted and well-paced, this is a story that'll keep you turning pages late into the night." (Marc Secchia, best-selling MG/YA fantasy author)

What listeners say about Joss the Seven

This was a great book, loved the plot. Horne had strong characters, both male and female. A brilliant spin on the classic superhero story. I highly recommend it.

I received free copy through for a impartial review. I found the characters and story interesting. There is a lot of world building done in a small town and the world at large at the edges. I enjoy the uses and descriptions on the powers work. the story is fun, action packed. Usually the protagonist is weakest and least interesting part in story. This is not the case here. Lead is interesting and the story overall is great.

What a great listen!

I thoroughly enjoyed this listen from start to finish. It was inventive with extremely likable characters, both young and old. The story moved very well with a great balance of you ups and downs.

I sincerely loved the narration. Coffin was able to capture the breeziness of the story and literally gave Joss wings.

I can't wait for book two.

Refreshing to find a "clean" story these days--and it's a great story, too! Great narrator!

Last day of school and Josh is in trouble. At the principals office and not sure how he was going to get out of this until something crazy happened and he was out!! School is out and Josh and his best friend Thomas have a chance to learn special skills, like karate but not. All is not happy though as Janie, Josh’s little sister, is tagging along and turns out she is good. This is where we learn that Josh is not normal and the school is just to hide his training. Mara is his handler and pulling the strings—or is she? When can Josh tell his parents and who is Jordan. This was an exciting book which I think is good for anyone, boy or girl from 8-80. I can’t wait to get started on book 2 which I already purchased. I actually listened to the audible of this book on a recent trip and it was very good.

Joss is a young boy who finds out on the last day of the school year that he has special powers. He meets someone who not only showed him he has powers, but that is willing to teach him how to use the powers... Just so long as he hides them from everyone including his parents.

The book was a fascinating story of a boy finding his powers and everything that goes along with the powers. The story was amazing and I hope to listen to the next one in the series soon. This story did end though without being a cliffhanger.

I would definitely recommend this book to people who need a bit of magic in their life!

A fun, quick-paced story of a boy discovering his superpowers -- and the importance of the people around him. Good guys, bad guys, fun fight scenes, and a refreshingly competent kid sister. Though there's an opening for the next in the series, this story is complete.

Would you listen to Joss the Seven again? Why?

Absolutely! In fact, as soon as I heard how good it was, I announced to my family that we're listening to it on our road trip this summer. It's so well-paced and exciting that I know it will keep the whole family's interest for the drive.

What other book might you compare Joss the Seven to and why?

It's like a Peter Parker becoming Spiderman story. It reminds me of another teen superhero series called The Cassidy Jones Adventures, also super exciting.

Kevin Coffin was flippin' amazing. I had already read the book before I heard the audible version, and I had pacing and voices in my head. Coffin completely lived up to -- and improved upon -- my imagination. He kept each character distinct and knew when to speed up and when to slow down. You could SEE things happening because of his timing and vocal mannerisms.

The whole book has the twists and turns of a great roller coaster ride, including switch backs, corkscrews, and total loop-the-loops that upend your whole vision of who to trust and what Joss should do. I found moments of wonder, humor, terror, and triumph.

JOSS THE SEVEN audible is the perfect marriage of excellent story telling and superb voice acting. The talent of both men involved makes this one a definite keeper.

I had purchased the book on my own, but received a free copy of the audible book in exchanged for an honest review. Because of how much I loved the written book, I was more than happy to do so, and my comments were in no way influenced by the fact that the audible version was free to me.

I will definitely let my daughter listen to this book. she'll love it too. I can't wait to get the second one.

I have tried several times to get thru this book.I just can't.The narrator,Kevin Coffin is good.The premise is good.I just can't connect with it.I was given this book by the narrator,author or publisher free for an honest review.

Great story that pulls you along and draws you in!

I was quite impressed with this book. It manages to work across multiple age groups very effectively as whilst featuring a young hero it deals with many many adult themes and yet still retains an air of youthful lightheartedness that is hard to describe.

The characters are actually quite well developed for such a short book and there is sufficient range that you feel a connection with at least one character.

The story itself is quite inventive and moves along at a good pace never lulling or jumping ahead. There are a few little twists that make for a little surprise.

The narration is very effectively done and all characters have sufficient distinction and individuality that allows for an immersive experience. Multiple voice styles and accents lead to an impressive performance.

In summation this is a great book for anyone looking for a fantasy/superhero type adventure story that remains lighthearted and funny throughout.

I didn't know what to expect from the read up and the age it's aimed at. I've listened to this with my 12 year old son and we both loved it.

Joss and his friends are great characters. His relationship with his sister is spot on for their ages and it's a book with great pace.

The idea of what Joss's powers are is quite unique and really good and I like the fact that we don't see him explore them all in too much depth because it gives us scope for growth in book 2. The story itself is also good its fast moving and runs along nicely. It was amusing in the right way and the action in the book is also well done. All in all a great first book and I'm really interested to see where book 2 goes.

The narration was great. The narrator for me either engages me straight away of has me putting the book down to go elsewhere. Kevin Coffin does a great job in engaging me in listening to the story and separating the characters into individuals. I really enjoyed listening and the narration brought the book to life.

Where does Joss the Seven rank among all the audiobooks you’ve listened to so far?

Certainly up there with my most recent purchases, very much drawn into the world constructed.

The protagonist, it is he who you follow throughout and the voice and direction is well rounded.

What does Kevin Coffin bring to the story that you wouldn’t experience if you had only read the book?

Haven't heard anything by him before but would certainly look out for again!

Finished in the same day so ... yes lol.

Great series opener, am looking forward to subsequent instalments.
This book was given to me for free at my request and I provided this voluntary review.

I was given a free copy of this audiobook, by the author, in exchange for an unbiased review. This book is aimed at the preteen to early teen market, so I had to dig deep to find my inner child, in order to give a fair review.

For those parents who are particular about what their children are exposed to, in their entertainment, add this book to your approved reading list.

To potential purchasers - don't be put off by the cover. (It's the only thing about the book that's a little lacking.)