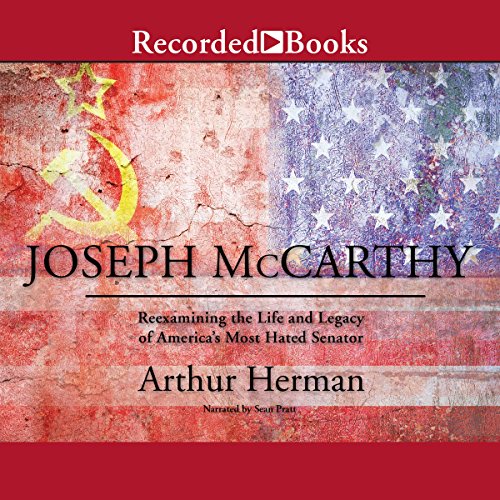 By: Arthur Herman
Narrated by: Sean Pratt
Try for $0.00

Was Joe McCarthy a bellicose, shameless witch hunter who whipped up hysteria, ruined the reputation of innocents, and unleashed a destructive carnival of smears and guilt-by-association accusations? Were McCarthy and McCarthyism the worst things to happen to American politics in the postwar era? Or was McCarthy just a well-intentioned politician who seized a legitimate issue with the fervor of a true believer? Perhaps something in between.

For the first time, here is a biography of Joe McCarthy that cuts through the clichés and misconceptions surrounding this central figure of the "red scare" of the '50s and reexamines his life and legacy in the light of newly declassified archival sources from the FBI, the National Security Agency, the US Congress, the Pentagon, and the former Soviet Union. After more than four decades, here is the untold story of America's most hated political figure, shorn of the rhetoric and stereotypes of the past.

Joseph McCarthy explains how this farm boy from Wisconsin sprang up from a newly confident postwar America and how he embodied the hopes and anxieties of a generation caught in the toils of the Cold War. It shows how McCarthy used the explosive issue of Communist spying in the '30s and '40s to challenge the Washington political establishment and catapult himself into the headlines. Above all, it gives us a picture of the red scare far different from and more accurate than the one typically portrayed in the news media and the movies.

We now know that the Communist spying McCarthy fought against was amazingly extensive - reaching to the highest levels of the White House and the top-secret Manhattan Project. Herman has the facts to show in detail which of McCarthy's famous anti-Communist investigations were on target (such as the notorious cases of Owen Lattimore and Irving Peress, the army's "pink dentist") and which were not (including the case that led to McCarthy's final break with Whittaker Chambers). When McCarthy accused two American employees of the United Nations of being Communists, he was widely criticized - but he was right. When McCarthy called Owen Lattimore "Moscow's top spy", he was again assailed - but we now know Lattimore was a witting aid to Soviet espionage networks. McCarthy often overreached himself. "But McCarthy was often right."

In Joseph McCarthy, Arthur Herman reveals the human drama of a fascinating, troubled, and self-destructive man who was often more right than wrong and yet in the end did more harm than good.

What listeners say about Joseph McCarthy

Arthur Herman is a professor of history at George Mason University. Herman’s definition of the McCarthy era is “A battle pitting atheist commie liberals against church going moral conservatives”.

Herman states he used archival material from former USSR and declassified U.S. materials as his main areas of research. Most interesting is the author’s discussion of the Senate hearings. Herman provides a revisionist view of the American people and McCarthyism. I was interested in Herman’s information about the situation between National China, Communist China, USSR and the State Department. One of the few events escaping revision is McCarthy’s physical attack on adversarial columnist Drew Pearson.

The book is well written and researched. Herman does a good job in summarizing complex subjects. Herman points out that McCarthy’s sloppiness in making allegations, alcoholism and his other flaws caused his downfall which covered over his success in hunting down communist spies in government. The author also made a case that McCarthy was bipolar.

Sean Pratt does a good job narrating the book. Pratt is an actor, voice-over artist and multi-award winning audiobook narrator.

Well, if you can stand the truth, you'll find it in this book. Herein, you'll find what the Left already knows - McCarthy was largely right, but went about proving it like the brawling Irishman that he was, so he made enemies. McCarthy lacked finesse in treating with traitors and murderers, that was his big crime. Great book.

Caution: Beware repeating the past

Listen with an ear to current events. Current vocabulary and consequences have deep seated roots.

Always suspect the wrath of the left

Good listen, in becoming my habit of looking through history to discover new insight given by the pasage of time I chose this title and was richley rewarded.

Spend the time with this read then ask yourself some questions.

Why do progressives become so ugly when questioned?

Why do they become even uglier when they don't want to answer the questions you ask?

Does the response seem a bit dishonest and extreme?

What could that mean?

Definitely a biased revisionist telling of the McCarthy story --- not sure if I had read the more scholarly reviews I would have gotten it, and was temped to quit --- but I can strain out the hagiography -- and its an interesting history of the times, around McCarthy, lots of connections of politicians just starting out in the 1950 who were prominent figures in the 1960s.. Robt Kennedy, Symington, Dirksen and so on So take it with huge grain of salt - a whole 50 lbs bag, - but if you can do that, its an interesting listen

Some good information but mostly unfocused

Half the book is just an excuse to bash liberals. There are some good information especially about McCarthy's early life but the author is so desperate to prove that McCarthy was a cool dude that he grasps at straws