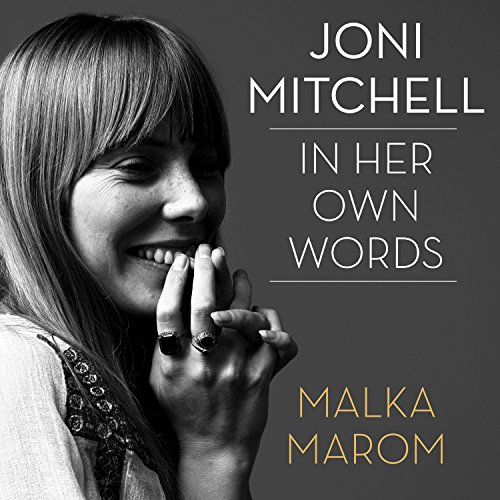 Joni Mitchell: In Her Own Words

By: Malka Marom
Narrated by: Carrington MacDuffie
Try for $0.00

When singer, musician, and broadcast journalist Malka Marom had the opportunity to interview Joni Mitchell in 1973, she was eager to reconnect with the performer that she'd first met late one night in 1966 at a Yorkville coffeehouse. More conversations followed over the next four decades of friendship, and it was only after Joni and Malka completed their last recorded interview, in 2012, that Malka discovered the heart of their discussions: the creative process.

In Joni Mitchell: In Her Own Words, Joni and Malka follow this thread through seven decades of life and art, discussing the influence of Joni's childhood, love and loss, playing dives and huge festivals, acclaim and criticism, poverty and affluence, glamorous triumphs and tragic mistakes.

"Mitchell's story will resonate on a universal level, just as her timeless music has already done." ( Library Journal)

What listeners say about Joni Mitchell: In Her Own Words

Where does Joni Mitchell: In Her Own Words rank among all the audiobooks you’ve listened to so far?

Second best to Vol. 1 of the new Beatles biography

She does everything right--lovely voice, and she manages to capture Joni's voice and spirit not by trying to imitate her but by somehow giving the right inflections with the right energy. Very unpretentious and engaging performance.

I've read several hundred biographies and this one was the worst. In as much as I love Joni Mitchell as an artist, writer, vocalist, guitarist and poet, I have to believe that it's the tone of the narrator and the fact that this book was simply complied from several interviews by the same writer many years ago. It was a painfully dull and dry read and after listening to about 70% of it I had to put it down.

Not really. Did not care for narrator, and how she announced the speaker each time, except if it was one of Joni's musicians. Also, reading the lyrics was very lame, should've gotten permission to use the actual song bytes.

What was one of the most memorable moments of Joni Mitchell: In Her Own Words?

Noting memorable, did not finish listening as had trouble with the audio skipping on my Samsung Phone.

In the future all interview books, if it's just 2 speakers, don't need to have their names announced first, I think the reader is hep enough to pick up on who is talking. And again, playing sound bytes rather than reading lyrics would be more entertaining, and not so stale and corny.

I enjoyed this book very much and was fascinated by Ms. Mitchell's creative process.

The lyrics of many songs were read, which worked some of the time. Some of the lyrics work as spoken poetry but others need to be sung.

One of the best artist/poet/composer ever done.

A great relevant dialogue between two women friends opening doors to each other in synchronized storytelling, with casual and relaxed tone.

This book is filled with detailed surprises, engaging about songwriting and composing music. Also understanding of an era through personal experiences of what she and the author learned.

Familiar Songs changing context and rhythm in labyrinth of circular time unfolding sequences of Poetry alive like hearing it for the first time...the bio In between flowed like music. Author achieved understanding of the length and depth of a persons insights, who has often been obscured by shallow culture.

There were passages that made me laugh and sigh, what a magnificent range. Discovered a wise & humble owl with translations of poetic perceptions, ideas, flow of images,complexity of feeling, struggling & critiquing involved in creative process, of art making.

More than a biography, a probing dialogue of sources that clarify an era and guide a large body of Original work. Splendid. Worth a second read.

Gets better and better as Joni grows with her work. And because she remains honest she gets deeper and deeper and the listener learns more and more. Gone listen again. Way more here than you can absorb in one shot.

Great focus on the creative process

I enjoy music bios but am invariably disappointed in the lack of focus on details of the creative process by the subject of the book - not this time. Author and subjects talk like soul mates in an intimate and personal exploration of the bountiful creativity of Joni Mitchell. It's also nice to see, thanks to her brutal honesty that she is indeed human and lacks many of the "left brain" skills.

Almost as good as an autobiography

I love Joni Mitchell's music and lyrics. These interviews put into book form really dig deep into how the songs came about and what she was thinking.

Joni Mitchell is a creative force

This book is for people who need to be woke to the creative space of an open mind.

Not sure why I didn’t get it 35 years ago about her painting.

Joni, if you read this, thanks for speaking up and holding your own.

This book is only about Jonis lyrics and what they mean. No mention of the great men in her life. Maybe I didn’t understand the just of the book upon purchase, but it was not for me.

Enjoyed this, once I'd got used to the narrator playing the part of Malka and Joni.

Thank you for the writing, the narration and for bringing the story of such a wonderful artist to light.

it's all about the music

If you are looking as I was for the life story of Joni, her loves, losses and tales of acquaintance then this book is not for you. if you want to know about her music then you will be happy with what's offered. I expected both and was disappointed.

Only buy this book if you want to know about the contents of her songs as that is all it is about. There is very little if anything about the life of Joni Mitchell. Didn't manage to get to the end

This is a really enjoyable set of three interviews between Joni and Malka, a respectful and intelligent musician and journalist, who clearly had the confidence of this private artist. Because of the standard of questions asked, these interviews give a fascinating insight into Joni's creative process and inner life. They each take place some years apart. I loved the narrator - she allowed you to hear her as both Joni and Malka, and was subtle in her expression. You kind of forget you're not hearing the two women themselves speaking - just what you want!

I understand that this was a series of interviews, but it became really repetitive and annoying for Malka to keep having to say her name all the time. She could have re-written this book so it was Joni's thoughts without the interviewer putting herself front-and-center all the time; she's not the star.

I thought I knew Joni

But I really didn’t know her at all....
Whether you’re a fan or never heard of her, listening to this amazing woman’s words is fascinating and inspiring. Highly recommend.