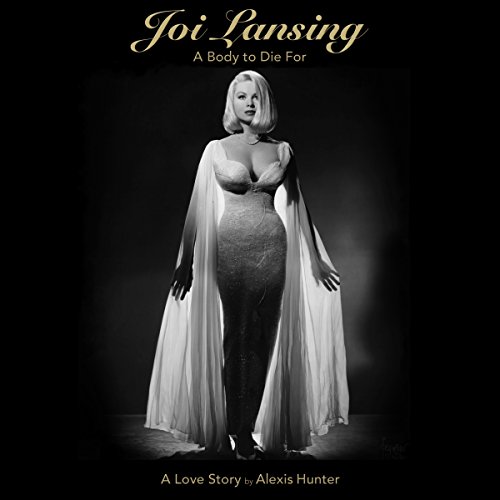 By: Alexis Alexis Hunter
Narrated by: Daniela Acitelli
Try for $0.00

Joi Lansing: A Body to Die For, colorfully chronicles personal and intimate details of the last four years of the talented '50's blonde bombshell star's fascinating life. After three decades of successful TV and movie appearances and Vegas singing stardom, Ms. Lansing died far too young at just 43. Though her funeral was attended by luminaries of the day, (Frank Sinatra sent a huge floral display), her light went out relatively unceremoniously.

Always on the verge of making it big, Joi packed them in with standing room only in Vegas, but when the curtain came down and the audience was gone, who was she? Sadly, the one relationship where she was loved for the sweet, gentle woman she really was, the friendship that might have given her the strength to finally cross the finish line for that one moment of glory for which she had run since she began in show business as a little girl of 14, was ended at her death from breast cancer in the arms of her dear friend, Rachel. Author Alexis Hunter, (friend/baby sister), was the only person who really knew Joi and knew how she struggled with a suicide-obsessed self-image and deadly drug problem after being a child star at MGM, where uppers were a common way to keep the kids working 20 hour days.

What listeners say about Joi Lansing

A Journey Back In Time

Celebrity memoirs and biographies are among my favorites to read and listen to and this one made me feel as if I was being transported back to the Golden Age of Hollywood. I felt like I was sitting in my living room having coffee with a dear friend who was sharing her story of life, love, heartbreak and hope. Alexis Hunter writes with honesty, kindness and respect and Daniela Acitelli's deep, sultry voice and emotions made her the perfect match for this story. Her ability to make me laugh, cry and feel everything in between was incredible. What a tragically beautiful love story.

Definitely and extremely worth reading/listening

"Joi Lansing: A Body to Die For" is a work that has two distinct and equally valid sides to it, along with a myriad of various interesting sub-plots. All of these stories within the main story give strong insights into two very loving and loved souls and to the social tones of the early 1970's era.
First, there is the tragic, heart-rending love story between the bright, talented and beautiful Joi Lansing and the author, Alexis Rachel Hunter, and within it a collection of sets and settings that cover a multitude of colorful geographic locations. The imagery in the text is as photographic as the amazing collection of photographs contained in the center of the book version(worth buying for the photos alone).
Therefore, i recommend that Audible listeners also buy the book so that they can be privy to the collection of photos found within it.
I also am glad to have the hardcover as well as the Audible version because the book has well crafted liner notes by Kate Porter-Avery.
Then, there is the message that there are many doctors who have strayed from the Hippocratic "Do no harm" oath when it comes to needless hormonal and silicone inuections, unnecessary hormonal supplements, uppers and downers. And, of course, the message extends to the Hollywood "studio system," which fed the sins of the doctors. Tho it's evoloving, there still is a remnant of bad actions in the film industry; this fact makes the book even more timely. It is not a blanket slam on the medical profession, however. One of the important antagonists in this true story is the good Dr. Wilson, who fought the good fight to prolong life and quality of life for Joi as her sad physical condition progressed.
There are many good lessons in this work, on all levels from realistic to abstract. It will take you on an unforgettable journey and bring to light some aspects of life that we'd do well to know.
The narrator gives a perfect reading and her vocal interpretation is emotionally powerful.

This audiobook is boring...!

The narrator is very hard to listen to and sounds like a drone. The story itself is also difficult: it’s so boring. Hollywood biographies are my favourite kind of book, so I really did try and stick with this one but I gave up half way through. Maybe the story got better second half but I’d had enough. I would have exchanged it if I could.

What could have been a touching highly effective read is mostly a superficial book based on anecdotes and endless chapters about different restaurants and the foods they served.
I would love to read a more balanced/serious biography about actress Joi Lansing. For some reason the relationship between Joi and Alexis doesn't strike me as real, Alexis basically comes off as a young obsessed fan instead of a real life lover. Also I have a hard time believing that Joi's ex husband who was such a factor in her life could be that naive not to see the "closeness" between Joi and Alexis.
The age difference between the two ladies and the fact that Alexis basically turned over life and career aspirations to Joi and wasn't earning a salary also struck me as wrong somehow. Joi basically kept the young lady around as a lover/friend/assistant and the fact that Alexis makes comments about not having enough money to buy etc doesn't put Joi in the best light. I wonder if she at least left Alexis a few dollars after her death?

Now onto the narrator. Probably the worst narrator I've ever listened to. She speaks in this really annoying condescending Kim Kardashian voice and some passages I almost felt embarrassed for as she seemed to be making fun of the story and the characters. The voice she uses for Joi makes her seem extremely shallow and borderline retarded. I will never listen to anything read by her again.

All in all it's an okay story but could have been extremely touching, educating and important.
All the ingredients were there.

Having already read the book by Alexis Hunter, I was already Blown Away by the story which was written so tenderly & I felt I was taken into this world of glamour, celebrity and it was a real love story set in difficult circumstances. The audiobook adds a really special dimension to this & the narrator in her tone, intonation & delivery so insightfully delivers this story so specially. This is a wonderful audiobook which takes an already amazing book to another level. A very emotional story is really brought to life by this narration. Thoroughly recommend & i will listen to it again for sure.