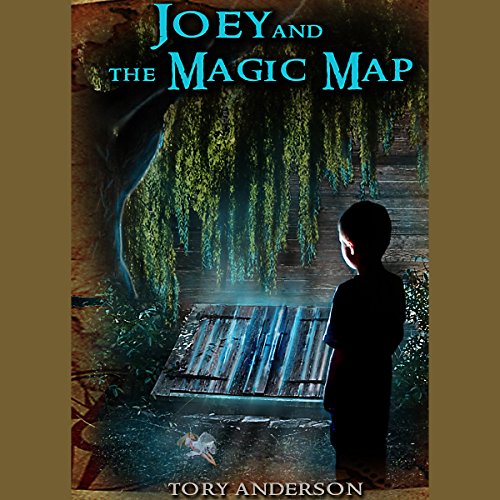 Joey and the Magic Map

Joey Johanaby thought his life ended when his dad died. Being forced to move into a mysterious, old Southern mansion in Tennessee seems to make things worse.

With Mrs. Johanaby struggling to learn new job skills, Joey is given the difficult task of looking after the twins for the summer. The mansion is home to more than Joey and his family.

Ghostly and magical characters from the mansion's past take an interest in Joey and his struggles. They want to help, but their quirky methods are questionable. After the family is almost torn apart by a near tragedy, Joey obtains a magic map.

What listeners say about Joey and the Magic Map

Listen to this with your kids!

Yes. Joey and the Magic Map is a book that parents and kids (probably age eight and up) can listen to and enjoy together. I think it's important that parents engage their children in conversations about what's important in life and why. This is a book that will help them do that. Adults as well as children will love the story—and will find plenty to talk about later.

I recently re-read "Half Magic," which I loved as a child. It's about a family of children who go on a series of magical adventures that help them understand what really matters.

Which character – as performed by Cory B. Anderson – was your favorite?

Cory Anderson is a pleasure to listen to, and has each character’s voice just right. Henrietta, the ghost of a southern belle, is my favorite voice: he’s captured her lilting accent perfectly!

I found it deeply moving.My favorite line in the book made me stop what I was doing and just stand still for awhile. I've thought about it many times since:“‘Gone’ is for that ice cream you ate last week or for that dollar you spent at the dollar store for that squirt gun that broke the next day. ‘Gone’ is never for people, especially people you love. They are never ‘gone.’ They are just somewhere else at the moment.”

Having read Joey and the Magic Map a year ago, I was looking forward to listening to it when it came out on Audible. I wasn’t disappointed. In fact, I was surprised at how much had gotten by me the first time. The book seemed even richer the second time around, especially with the voice of Cory Anderson narrating. The book is a children’s fairy tale that assumes children have to grow up in the world where bad things happen: where little sisters can be pint-sized tyrants; where fathers can die; where mothers can let you down. Even magical lands host pirates who are bloodthirsty, not jolly; and where people don’t mind sacrificing girls to placate a giant, ravenous eagle. Author Tory Anderson doesn’t pull any punches. But because of that, Joey’s adventures with his magic map seem genuinely significant. By the time we reach those adventures, we’re already more than half way through the book, and we’ve seen up close why Joey can’t let go of his grief at his father’s death; why he feels like a outsider in his own family; and why he considers himself a coward not worthy of his mother’s affection. Heavy stuff. And yet . . . there are gloriously magical bubbles, comforting chimes floating on the wind, gentle conversations with a delightful ghost, and a recognition that we can, as Joey says, “know things without knowing how you know, you know?”

'Gone' is never for people,

What made the experience of listening to Joey and the Magic Map the most enjoyable?

This book highlights the magic of life. The experience of going through it reminds me that magical people have found their way into my life. I found the experience enjoyable and encouraging. Those we love are never really gone.

I find it difficult to pick favorites, but the first map in the book, Story's map, is a delightful scene that highlights Anderson's skills as an author and is the perfect transition into Joey's magical adventure.

This is a book to share with your children. Like all great books for youth they will will laugh, imagine, and may just learn something important about life along the way.

If you could sum up Joey and the Magic Map in three words, what would they be?

Joey and the Magic Map is different from the current popular books for sixth graders. This is why I find it so refreshing to read. I really can't compare it to another book. Joey and the Magic Map is about a boy, however it is about a boy and his family. The boy has his adventures like other books have, however, Joey's adventures are different. You just need to read this book to find out for yourself.

What does Cory B. Anderson bring to the story that you wouldn’t experience if you just read the book?

Cory uses his voice to play the part of each character. I love that part of his narration. Listening to an audio book, gives the students or the reader a different experience than reading it themselves.

Although the book was written with great and wonderful description where I could literally visualize in my mind what the characters looked liked as well as the setting, I think the book started to be a real page turner when Joey used the map to go on his adventures. My students didn't want to put the book down when we got to that part.

I am a sixth grade school teacher and I have read Joey and the Magic Map for the past two years with my class. My students love the book and continue to talk about it long after we have finished it. There are a lot of teaching opportunities in the book where I can have meaningful discussions with my class. The narrator, Cory Anderson does an excellent job narrating this book. I would highly recommend this book! It has such a wonderful good feeling ending! It is definitely worth the read!

Where does Joey and the Magic Map rank among all the audiobooks you’ve listened to so far?

Right at the top

I haven't read another that compares to this book.

What does Cory B. Anderson bring to the story that you wouldn’t experience if you just read the book?

His warm, expressive voice was a pleasure to listen to. He brought the soul of the book to the surface.

I loved how the author used the chimes signaled the presence of Henrietta. I was moved when Joey's character was finally resolved within himself.

I loved the ending scene with Joey and his mother.

Rarely have a read a children’s book in which a parent seemed so out of place.
Recently widowed, Joey’s mom is someone who is unsympathetic and pathetic. Partly due to the writer conceiving a plan for Mom to desire the children to have breakfast at 7am, lunch at noon, and dinner at 6pm while she works on classes for certification for employment.
I don’t know ANYONE who studies for 11 hours a day, much less a single mom who ditches her kids for the oldest child to care for them.
It was apparent this was plot driven, but it tainted what could have been a more emotional world building book. If I were Joey, I’d stay on the tropical paradise.
I’m conflicted about the 3 star on the book. I liked how map helped Joey discover himself. I liked the caretaker and the ghost. The twins were lovely and held more substance than mom. But with mom being an integral character, she ruined the promise of an impactful and insightful fantasy adventure. The narrator could have been the author or related to the author (or not at all) who also must hold disdain for the mother, portraying her as uninterested, unattached, and bored. She was always sighing and spoke as if she was half asleep and preoccupied.
Truly, I felt sorry for the kids. And in the real world, CPS should be called and mom should be TDO for a psych evaluation and treatment.
I wouldn’t recommend it nor ever listen to it again; but it wasn’t awful. At least I knew and could comprehend what I was listening to and didn’t lose my place.