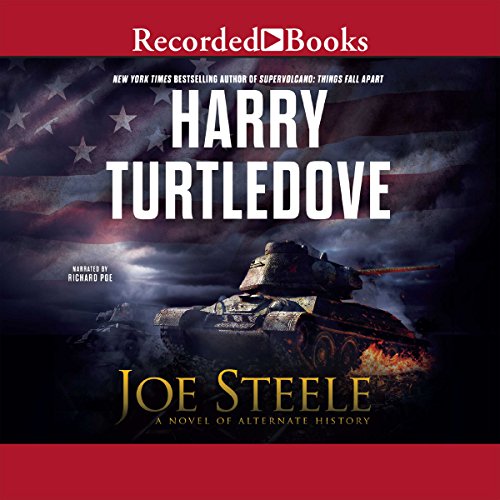 By: Harry Turtledove
Narrated by: Richard Poe
Try for $0.00

President Herbert Hoover has failed America. The Great Depression that rose from the ashes of the 1929 stock market crash still casts its dark shadow over the country. Despairing and desperate, the American people hope one of the potential Democratic candidates - New York governor Franklin D. Roosevelt and California congressman Joe Steele - can get the nation on the road to recovery. But fate snatches away one hope when a mansion fire claims the life of Roosevelt, leaving the Democratic party little choice but to nominate Steele, son of a Russian immigrant laborer who identifies more with the common man than with Washington, DC's wealthy power brokers.

Achieving a landslide victory, President Joe Steele wastes no time pushing through Congress reforms that put citizens back to work. Anyone who gets in his way is getting in the way of America, and that includes the highest in the land. Joe Steele's critics may believe the government is gaining too much control, but they tend to find themselves in work camps if they make too much noise about it. And most people welcome strong leadership, full employment, and an absence of complaining from the newspapers - especially as Hitler and Trotsky begin the kind of posturing that seems sure to drag America into war.

What listeners say about Joe Steele

Good, but not his best

What did you love best about Joe Steele?

The story is both wide and deep. It encompasses what happens to the whole country by focusing on two brothers. Because of that, the narrative holds together well.

Joe Steele is based on the assumption that people as a whole would meekly roll over for a totalitarian government. That premise is the basis for the entire story. To not allow for any reaction other than the two brothers' seems a hole in the story that should have been filled.

This was an amazing book by someone who is becoming one of my favorite authors. Other than one little thing at the end, the plot is realistic. The scary part is that much of President Steele’s agenda is not that far removed from our real life FDR’s. The main divergence seems to be Joe Steele’s open fascism against the more subdued and subtle fascism of FDR. I would strongly recommend this book to anyone, especially those who enjoy alternate history.

Story seemed a little weak. Pacing was very hurried, too much to cover in 1 book but too little for a series.

Turtledove Knocks It Out Of The Park!

I was rushing into a meeting at work, and totally exhausted, but I HAD to stop and offer a review on this audiobook, and type fast as a maniac. Let' s get to it.

If you've ever read my reviews, you know some of my favorite listens/reads are "What If?" alternate historical fiction. A simple twist or two, and minor event change, and what would or could happen?

Tragically, so much of this particular genre is flooded with poorly contrived, unrealistic and excruciatingly painful to read second or third rate rubbish. And the subsequent sequel (If ever) reads like the author lost a bet. The stuff that can drive a book editor to hard liquor.

Not here - Turtledove is the "blue chip stock" writer of alternate history. The undisputed top of the food chain. A Master Chef of excellent listening cuisine. A wordsmith storyteller whose alternate history writings/listens are ALWAYS worthy of your Audible credits.

Do yourself a favor and look into this author's background - No WONDER so many of his his alternate history series are "must reads."

So, here's his "What If?" that is, in essence, a dark political thriller. An original idea. A page-turning, can't wait to hear what happens next listen...

What if Joseph Stalin's family migrated to the United States, along with countless other families seeking a new life and pursuit of a their dreams? Like almost every immigrant family that crossed the ocean to join us, their last name was butchered at Ellis Island, and thus became the Steele family. What if "Joe Steele" was born and raised here, eventually became a governor, ran for president against Franklin D. Roosevelt...AND WON?

Imagine where we might travel as a nation. As a world power. How would our politics change? The military? The two party system? Individual's rights? War? Peace? A bright future? A war-torn nation? World War? Peace At Any Price?

If you want to find out more... BUY THIS AUDIOBOOK.

Still not convinced? Go look at his body of alternate history work - Dead spot on page turners. I own them all, and that's not because I'm collecting them. THEY"RE GOOD. They're full of excellent writing, great characterization and believable premises. Engaging dialogue? CHECK. Epic in scope? DONE. Followup novels in the series that keep the pace fast and fresh? YEP.

But is this "What if?" plausible? Could it really happen?

YES. And how this tuns out is.... well, I've never given hints or page turners in my reviews. That's a bit selfish on my part, and ruins YOUR journey. And what a deeply magnificent one it is.

All I can say is that I stayed up all night to finish listening to it, and on a WORK NIGHT. The night before that crazy meeting. Considering the sheer size of my audiobook library, this doesn't happen often. If this is going to be another of Turtledove's series, I'll buy the audiobook, even if I don't have any available credits.

I'll throw MAD CASH at Audible to get it.

I love the way Harry Turtledove writes his alternate history stories. it really makes you think what could have happened in history!

Like everything he’s written, this book is highly entertaining. The characters are fun, the story far from implausible (a problem with many alt history writers), fairly well researched. The only issue is the pace can be slow at times, but it is a very small criticism. Plus the reader was excellent

Harry Turtledove does it again

Once again I felt the eerie feeling of this could easily happen in our version of America.

What more can I say? Out of all of the books that deserve a movie/tv adaptation, this one deserves it the most!

This is pretty much the perfect book to introduce someone to Harry's style of alternate history. Its got all the Turtledove hallmarks, interesting characterization, well researched world building, an interesting scenario, complete with all the Turtledoveisms you'd expect in a book by him. But, unlike pretty much everything else by him on audible (with the exception of Guns of the South) this finishes its story in a single volume. For someone looking to dip their toe into alternate history, and not to get swept up in an 11 book series, this is a good place to start.