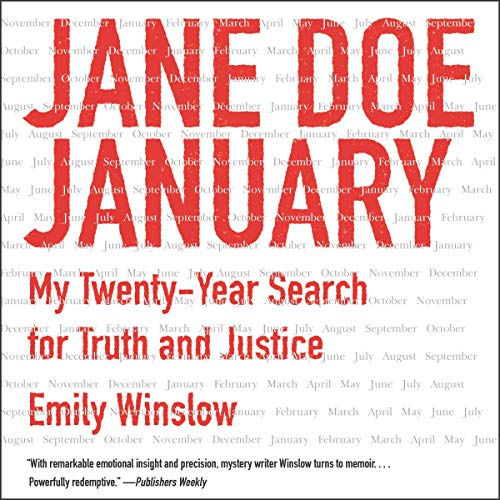 By: Emily Winslow
Narrated by: Ann Marie Lee
Try for $0.00

In the vein of Alice Sebold's Lucky comes a compelling, real-life crime mystery and gripping memoir of the cold case prosecution of a serial rapist, told by one of his victims.

On the morning of September 12, 2013, a fugitive task force broke down the door of Arthur Fryar's apartment in Brooklyn. His DNA, entered in the FBI's criminal database after a drug conviction, had been matched to evidence from a rape in Pennsylvania years earlier. Over the next year, Fryar and his lawyer fought his extradition and prosecution for the rape - and another like it - which had occurred in 1992. The names of the victims, one from January, the other from November, were suppressed; the prosecution and the media referred to them as Jane Doe.

Emily Winslow was a young drama student at Carnegie Mellon University's elite conservatory in Pittsburgh when a man brutally attacked and raped her in January 1992. While the police's search for her rapist proved futile, Emily reclaimed her life. Over the course of the next two decades, she fell in love, married, had two children, and began writing mystery novels set in her new hometown of Cambridge, England. Then, in fall 2013, she received shocking news: The police had found her rapist.

This is her intimate memoir - the story of a woman's traumatic past catching up with her in a country far from home, surrounded by people who have no idea what she's endured. Caught between past and present and between two very different cultures, the inquisitive and restless crime novelist searches for clarity. Beginning her own investigation, she delves into Fryar's family and past, reconnects with the detectives of her case, and works with prosecutors in the months leading to trial.

As she recounts her long-term quest for closure, Winslow offers a heartbreakingly honest look at a vicious crime - and offers invaluable insights into the mind and heart of a victim.

You Will Never Forget This Story - This Book

Where does Jane Doe January rank among all the audiobooks you’ve listened to so far?

When she burst out a profanity in the courtroom.

Every page of this book moved me. It is the most chilling book I have ever read. And I read approximately 200 books a year.

I would not even know how to qualify this book in a genre. It is in a genre of it's own. This is not a book you will be able to forget. For me, reading this book was akin to sitting a room and having the oxygen slowly escape and then being hit with sudden outrage. The writing is indescribable. But you are pulled into the mind very gently, and it is very real. You are there and living it. Fantastic communication skills. Courageous honesty. This is the door to another universe. You will be enlightened. Outraged. Curious. Motivated. Incredulous. Offended. Indignant. Your reality will be violated. And you will be motivated to act, to do something to fix our current conditions. This book will open your eyes to the injustice that is woven within our justice system. And you will be more aware of these conditions you are parked in.

A trite, whinge from a *loud* American

I *hate-listened* to the end of this book. I sit, unbelieving, as each atrocious description of the Author's actions, are described, with the brashest lack of self unawareness. The rape trial, in which this book spends the majority of its' time exploring, has *Two* victims, but you wouldn't know that - because, Emily's own narrative of her self-importance, *is* the only narrative. And just when one thinks it couldn't get any more painful; The untimely, and tragic death of a beloved, and much respected faculty member, gives our heroine some much needed self-pitying.
Unsure if it was the author's poor writing, or the narrator's whiney voice,. A confusing, rambling, racist, (who the f*ck thinks that sink taps with a single spout are "Normal"? Or worth mentioning!?...)
It's a journal for her American friends to read, so all things British are over explained Soccer is "Football", Faucets are called "taps" and look funny, They don't have Thanksgiving here... (She's lived there for 10 years.)
I did some research, based on me; it helped to be really rich to get over a sexual assault and live a great lifestyle. Look at me!
The author gives feminist survivors of heinous attacks a filthy name; And allows MRAs to take aim...
I could go on... Hate-Listen if you've nothing better to do; However, this is complete self-indulgent DROSS!