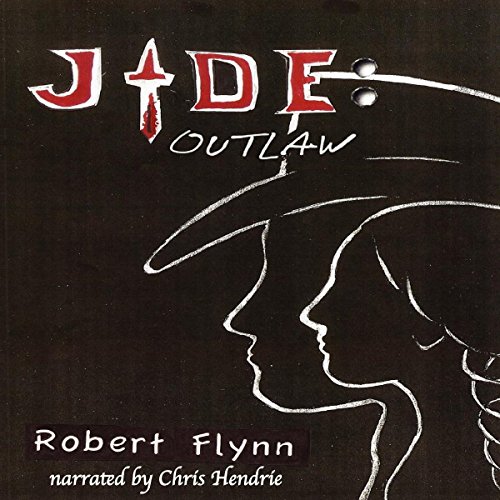 By: Robert Flynn
Narrated by: Chris Hendrie
Try for $0.00

From the author of Echoes of Glory, winner of the Western Writers of America Spur Award for best long novel, comes the tale of Jade, a rough man of the old West, molded by a tragic past, an Indian hunter who finds himself falling for a woman raised by Indians, symbol of all the he hates and all that he is.

Award-winning author Robert Flynn once again takes his listeners on a journey to a past they can imagine through his words, with people that are hard to forget, in a story that could be set in a modern day war...or placed like it is...deep in the Old West.

What did you love best about Jade: Outlaw, Book 1?

The confrontation between the central male and female characters. Riley O'Conner (Jade) is a hired gun and Indian killer. Crow Poison (Rain) is a white woman stolen by Indians who married one of her captors and gave birth to his son both of whom are dead. Each is attracted to and repulsed by the other one. Will he kill her? Will she kill him? The locale is a small settlement (not yet a town) in southern Texas post civil war when westward expansion was accelerating, Indian tribes were not confined to reservations, raiding bandits from Mexico were commonplace and general lawlessness was prevalent. The author sets up the dramatic tension between Jade and Rain with utilitarian transactions. He has dirty clothes and needs to eat. She does laundry and cooks meals for pay. Money makes the world go around and so the relationship begins.

What was one of the most memorable moments of Jade: Outlaw, Book 1?

Jade shooting his new bride at her request when they were pinned down enroute to their new home by marauding Indians lest she be taken alive by the sadistic killers.

This is my first audiobook. It is well read by Chris Hendrie who is a skilled actor, director, educator and friend of Robert Flynn. I chose to listen to it on one afternoon with a few minor breaks between chapters. Hendrie's presentation made it a pleasant experience.

Who was the most memorable character of Jade: Outlaw, Book 1 and why?

Jade is the most memorable character. Initially, he cannot understand why Rain does not kill herself due to the shame inflicted on her by her captors. Although puzzling to him, his position softens as the story evolves and by the end he continues to pursue a relationship with her. Will it flourish into a deepening love? Apparently, we find out in the sequel.

Robert Flynn has lived in Texas for decades absorbing its history and mythology while working among those descended from the myriad racial and cultural groups who occupied and settled this often difficult yet promising territory. With his rich prose peppered with archaic slang and wry bits of humor, he transports the reader to a dangerous time and place. Note: A glossary is appended for terms and expressions not in common usage today.

Underlying the whole tale is a clash of cultures, moral and ethical values. Issues driving the characters and events are not dissimilar to multicultural problems of today's world.

I highly recommend this novel.

If you could sum up Jade: Outlaw, Book 1 in three words, what would they be?

What was one of the most memorable moments of Jade: Outlaw, Book 1?

The ending, which was, to me, surprising

Have you listened to any of Chris Hendrie’s other performances before? How does this one compare?

This is the first I have listened to.

When Jade killed his wife

I became so engaged in the story that I listened to the entire reading in only two sittings.

This book was a really pleasant surprise to me. It's a very graphically written novel that transports you to another time and place, making you believe you are with those characters in that time.

The narrative is exceptional. And the performance by Chris Hendrie makes it all work. Hendrie has the ability not only to read narrative so that you can literally see what is happening, stimulating one's own imagination to flesh it all out, but he has a remarkable ability to differentiate the characters so there is clarity and involvement at every turn.

There is humor and suspense in the novel, but the delivery by Hendrie truly pulled me forward--wanting to know more about the characters, and what would come next in this volatile and dangerous world.

I highly recommend it.

Cinch up your saddle and lower the brim of your hat, because you’re about to enter the rugged and often unpredictable world of Riley O’Conner, known to most as Jade.

Set in central Texas in the late 1800’s, award-winning author, Robert Flynn’s, ‘’Jade: Outlaw” realistically transports you to the wild west, a place and time often underestimated for its danger and impossibly challenging way of life. The audiobook, narrated masterfully by Chris Hendrie, is brought to life with a perfect marriage between Flynn’s generous descriptions of time, place and character and Hendrie’s commitment to make sure every nuance of each person is carefully given a soulful, believeable voice. The authentic narrative by Hendrie easily transports the listener to the roughness of the west filled with daily struggles and questionable characters. Even the simple yet hearty food of the day is described so realistically that the listener feels as though they are invited to join the meal.

Each character from the town’s parson to the wayward prostitute Mattie, known to the locals as ‘’Killer” are brought off the page and full of life with Hendrie’s promise to make sure the listener connects with each character. This makes it especially easy to follow the unfolding story as there are many names and everyone is important.

Through ‘’Outlaw” we are reminded that it’s a gritty and often unsettling place where varied cultures struggle to co-exist. Social, religious and moral differences often create mistrust and conflict and sometimes end in quick and bloody struggles. Judgments of character and ways of life weigh heavily upon the people of this era and Flynn’s intent to bring the human qualities of the time are evident and plentiful.

We meet the people who inhabit the small town, located along a busy trail frequented by covered freight wagons. The nearby stream attracts cattle, ranchers, farmers and townspeople and the pressure to share resources and space are felt in this burgeouning era of expansion and different cultural desires. Here the Native Americans fight for their rightful ways among the encroaching and sometimes entitled white settlers. The search for balance in land rights, traditions and social, religious and emotional ways of life are played out daily and felt most intimately through Jade, who is a man struggling to come to terms with decisions of his past that continue to affect choices he makes in his present and into his future. People who know him often say he ‘’did the right thing” but it’s the one thing that seems to haunt him because he lost what was most precious to him: his wife. Jade wrestles with his choices and even finds his growing interest for Crow Poison complicated. A loner herself, because she is a white woman who was once married to a Native American, Crow Poison continues to embrace a controversial world Jade cannot fully accept. Their intrigue for one another is often over-shadowed by the deeply ingrained differences between them yet they also realize that they possibly share a dark secret. It is their similarities of being strong independent survivors that attract, yet they struggle to meet eye to eye with the way each of them chooses to live their lives.

‘’Jade: Outlaw” exposes the fragility of human nature when mistrust, fear and misunderstanding create hatred and divide, as they sadly often do today. Robert Flynn takes these important elements and presents them carefully in a place in history through the life of Jade. It is the soul that is uncovered and found, painfully and passionately through the choices made by Jade, and ultimately the one we come to understand.