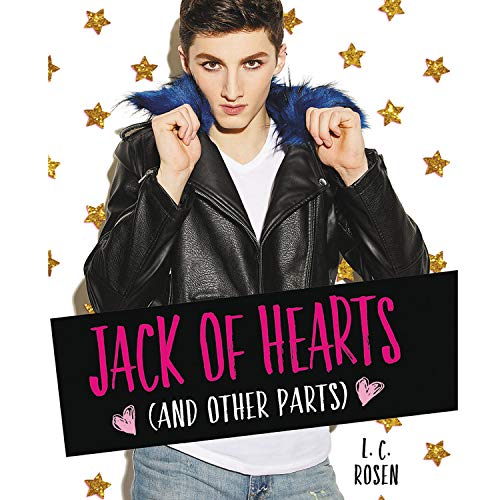 Jack of Hearts (And Other Parts)

Riverdale meets Love, Simon in this modern, fresh YA debut about an unapologetically queer teen working to uncover a blackmailer threatening him back into the closet.

Jack has a lot of sex - and he's not ashamed of it. While he's sometimes ostracized and gossip constantly rages about his sex life, Jack always believes that "it could be worse".

But then, the worse unexpectedly strikes: When Jack starts writing a teen sex-advice column for an online site, he begins to receive creepy and threatening love letters that attempt to force Jack to curb his sexuality and personality. Now, it's up to Jack and his best friends to uncover the stalker - before their love becomes dangerous.

Ground-breaking and pause-resisting, Jack of Hearts (And Other Parts) celebrates the freedom to be oneself, especially in the face of adversity.

"A sex-positive and thoughtful romp with humor and heart." (Kirkus Reviews)

"Unapologetically honest, refreshingly bold, and gloriously celebratory, being proud of who you are never felt so good. I loved this book." (Simon James Green, author of Noah Can't Even and Noah Could Never)

What listeners say about Jack of Hearts (And Other Parts)

The perfect mix of comedy, suspense, and introspection. The question and answer segments were also a nice touch.

An Evolution in Reading

This book was a roller coaster for me. I have been curious about it since it came out a couple years ago. I think the subject matter here is very important. Sex positivity carries a certain stigma, and it fails to adequately address the very real fact that teenagers ARE HAVING SEX. There’s nothing we can do to stop that.

But what we can do is equip them with the proper tools to engage safely and with as little risk as possible. It’s sad, though, that they’d have to turn to a book like this in order to get key educational points about it, rather than that information being readily available to them elsewhere.

It’s especially concerning that LGBT+ teens have even less access to important information. This book definitely addresses that, as well as other problematic issues, including the weird trend of straight girls fetishizing gay boys and men and their behaviors, relationships, etc. This book shone a light on that issue in a very nuanced way that I definitely appreciated.

My big problem with this book was Jack himself. I found it really difficult to relate to him as a character, in spite of all the good he was doing in the story in writing his sex column for Jenna’s website. I found him to be obnoxiously privileged, and seemingly proud of that fact (constantly referring to himself as rich). I also found some of his personal decisions difficult. Like...why would he really not go to the police over the stalking? It just seemed contrary to his character.

Jack admits several times to being a stereotype of what people think gay guys are by default. And I guess that bothered me a little bit, because my experiences with the LGBT+ community have been different. Where there was nuance in other issues, the portrayal of a gay male in this story seemed to lack any nuance whatsoever. Jack was just straight up unlikable for me throughout most of the book.

But by the end I realized something important, and it’s what drove me to give the book 4 stars.

Maybe it was the author’s intention to present Jack this way in order to make a very important point: it doesn’t matter what someone looks like, acts like, dresses like, etc. No one deserves to be bullied or stalked or made to feel uncomfortable in their own skin. Not even someone with whom it’s hard to identify or with whose actions we don’t always agree. Even if Jack is rich, privileged, bitchy, rebellious, shallow, a self-proclaimed slut...none of that matters. He didn’t deserve what he was put through.

The other big message of this book is that there’s no right or wrong way to be gay or different. Everyone has their own experience. Everyone has to blaze their own trail and figure things out in their own time. And that’s not just true of gay people...and in that way, anyone could learn something from this story.

It's a good story and although it doesn't break any original ground. It is told in an entertaining way. I'm not sure if there's a connection, but it does seem like the basic narrative was inspired by the Netflix series Sex Education. I'll get back to that and just a bit.

A really cool thing about this book is that although it’s aimed at the late teen (and then some) market, it doesn't shy away from sex nor does it moralize the value of finding one true love whom one will be faithful to forever. The author is letting the teenagers be teenagers.

In my reviews, I don't put a lot of time into outlining a plot. You can get that from somebody else. I spend my time talking about how the story works. And sometimes, how it doesn't.

The author toiled overtime creating three distinct narratives that are woven into one storyline. Any one of these narratives could have been fully fluffed out to form its own book.

The first storyline covers Jack has a student, friend, and a sexual being experimenting with the frontiers of his sexuality. Another narrative concerns a contrivance as Jack becomes a sex advice columnist. It’s more entertaining and well done than it might initially sound.

The last narrative was created to be the engine of the entire story and is used for dramatic tension and page-turning stimulus. It is the least well-done of the narratives and at times I felt distracted from my enjoyment of the first two. It is a mystery / Thriller narrative that our group of friends chooses to pursue as they become a group of young detectives and I couldn't help thinking that I had experienced this type of story somewhere before. Oh, yes, Scooby-Doo.

Once I thought about that, the similarities never left me, and I was a bit distracted from an otherwise well-written story. I felt it got a little hammy, unnecessary, and had the kids acting in ways that challenged my suspension of disbelief. Ruh-Roh!

Created and written by a gay male, Jack is an interesting and fun person to get to know. So many female writers of gay male fiction are very clumsy as they try to create a workable psyche for their gay male antagonists. Every moment spent with Jack was enjoyable. Author Lev Rosen did a splendid job creating his leading guy.

I hope he feels an inclination to create more stories involving adventurous, sex-positive males leads who not yet ready to settle down. In my mind, there's a lot of interesting real estates that can be covered in stories about the trade-offs involving the many choices facing young gay males that don't automatically involve a Relentless path to a HEA.

Aside from the mystery, another weaker part of the story was the lack of effort in fleshing out the group of friends. They were interesting folk and I would like to know more about them, but it was quite obvious that they were simply a means to an end and not a lot was going to be said about their deeper lives.

I also get a bit put off when adults in authority are either so compliant or negligent to the needs of high school kids in these types of stories. I won't go through the checklist of where the story went wrong in this regard, but it was more than once and it was frustrating because with just a little more writing Rosen could have created situations with these adults that actually reflected the way the world usually works.

One additional thing that rather irked me: As a writer who provided sexual advice to those in need, Jack wrote in very explicit terms. However, when the Lev Rosen turned his attention to creating scenes involving Jack romancing other males, it became the very opposite of explicit.

I will give a tip of the hat to the author for the way he included a user's guide to the politics and responsibilities of consensual sex as Jack was writing his columns. It was a very entertaining part of the story with many important topics opened for discussion. Only occasionally did the process seemed a bit didactic. Based on other works of fiction that have tried this, it's a very difficult line to walk and Rosen did a very good job doing it.

The narrator was perfect, and I certainly will look up his other projects.

I don't know how many stars to give this. Five stars imply perfection, of which this story falls just a bit short, but I don't like sticking it with four stars. So, five it is with the reservations I've noted and with the hope that Lev Rosen understands the weaknesses in the story and finds ways to correct them in what I think will be a very bright future writing wonderful stories.

I really enjoyed this audiobook. The preformance was really good and I loved the queer/sex positive take on highschool as a queer person who didn't have this sort of story when they were in highschool. The story was good but it got a little frustrating towards the end, tho.

Really good reader that can make the characters come to life with subtile voice changes. Good story aswell but he could have just looked at the camera of his building to be honest to solve it a bit sooner you really feel Jack's despair tho. I really liked the characters and I think the sneaky advise the writer put in could really help a bunch of people.