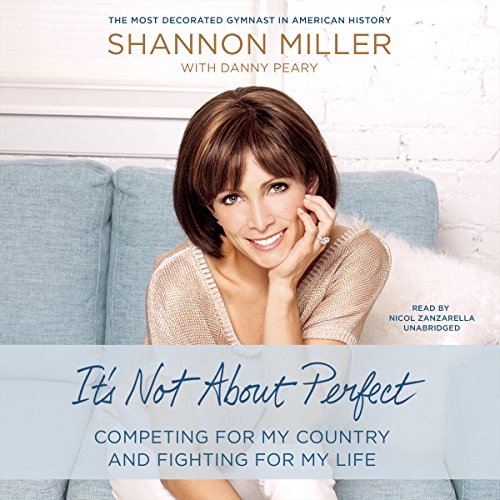 It's Not About Perfect

By: Shannon Miller
Narrated by: Nicol Zanzarella
Try for $0.00

"When the odds were against me, I was always at my best."

When she retired at age 19, Shannon Miller did so as one of the most recognizable gymnasts in the country. The winner of seven Olympic medals and the most decorated gymnast, male or female, in US history, Shannon tells a story of surviving and thriving. A shy, rambunctious girl raised in Oklahoma, Shannon fell in love with gymnastics at a young age and fought her way to the top.

In 1992 she won five Olympic medals after breaking her elbow in a training accident just months prior to the games. Then, in 1996, a doctor advised her to retire immediately or face dire consequences if she chose to compete on her injured wrist. Undeterred, Shannon endured the pain and led her team, the "Magnificent Seven", to the first Olympic team gold medal for the United States in gymnastics. She followed up as the first American to win gold on the balance beam.

Equally intense, heroic, and gratifying is the story of her brutal but successful battle with ovarian cancer, a disease from which fewer than 50 percent survive. Relying on her faith and hard-learned perseverance, Shannon battled through surgery and major chemotherapy to emerge on the other side with a miracle baby girl.

Her story of trial, triumph, and life after cancer reminds us all that it's life's bumps and bruises that reveal our character. From early on in her career, Shannon knew that life wasn't about perfection. In this incredible and inspirational tale, Shannon speaks out so as to be seen and heard by thousands as a beacon of hope.

What listeners say about It's Not About Perfect

My only disappointment is that I'd like to have Shannon read it. I think Bio/Memoirs are so much better when the author reads it! You feel more of their emotion in their voice.

I really enjoyed this book and couldn't stop listening. She has a wonderful talent for giving detail and not lingering too long on anything. I love how this book motivated me and empowered me. Her strength is contagious, and I highly recommend this book.

Good Story from an Elite Athlete

This story was very good and I loved her stories of being young. She talks about her mindset and how she was able to focus at such a young age. She transitions from athlete into regular life and she expresses how hard that is for her. Later on she describes her joys too of being a parent.

Even if you aren't a gymnastics fan you will find this an enjoyable listen. You will find her an amazingly driven person who eventually came into her own and found her own sense of balance (and I don't mean on the balance beam).

Interesting story with lots of dramatic twists and turns. Plenty of background information about the world of elite level gymnastics. Very encouraging for anybody that has gone through cancer.

i like when the author reads better, but this was agreat book overall. it is amazing what these athletes go through.

As a former gymnast myself I purchase this book to read about the adventures and struggle of Shannon Miller's life. after listening to her story I could appreciate her long hours of hard work and the satisfaction she felt from competing at such a high level. I wholeheartedly encourage you to read her story