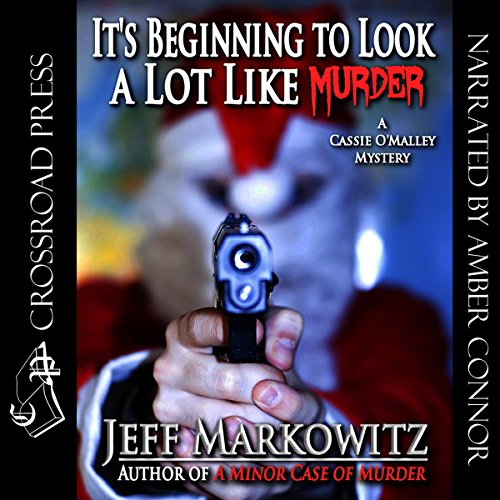 By: Jeff Markowitz
Narrated by: Amber Connor
Free with a 30-day trial

Cassie O'Malley is back in a Christmas mystery that will keep you laughing and guessing until the final showdown. At odds with her new boss, tabloid reporter Cassie O'Malley finds herself covering the shopping mall at Christmas. Cassie wants nothing to do with the assignment. Then Big Mack turns up dead in the men's room, his throat slit. Sensing an opportunity for 15 minutes of fame, mall security guard Oliver Berryhill spins a heroic tale of his confrontation in the men's room with the loan shark.

The police are skeptical, but Big Mack's son, the even bigger Little Mack is determined to avenge his father's murder. Barely a week later, a second body turns up in the employee break room and Cassie finds herself covering a double homicide. In a race against time, Cassie must solve the double murder before a third victim is killed in the wildly funny mystery It's Beginning to Look a Lot Like Murder.

What a great mystery that had me saying ‘wait, what?!’ Right until the very end. Great characters and storyline. Would love to read more in this series I received a free copy and left my honest review

could be a lot better

i think the story is ok but about an hour in and the narrator started repeating her self sometimes 3 times with out editing it out. and after the 3rd sentence she had to repeat in like 5 i had to stop listing

Cassie assisgnment for the holidays was the mall, boring story to try and write up about. Then murder happens an now has plenty of suspects. Some were quirky and brought humor to the story. Good plot, keep one interested and enjoyed the narration of. Given audio for my voluntary review

What disappointed you about It's Beginning to Look a Lot Like Murder?

At the end, they tell you WHO did it but do not tell you how it happened or why it was done!

It was VERY difficult to listen to this narrator. The sentences were read as if they ended in the middle of the sentence. The basics of reading a story were not followed and it was the worst audible performance I have heard. I almost feel bad but I HAVE to say this reading was absolutely done wrong. The waitress character was voiced unbearably.

If you could play editor, what scene or scenes would you have cut from It's Beginning to Look a Lot Like Murder?

They never tied in the problem of the municipal Christmas decor. I didn't see the point of meeting the Mayor's mother and boyfriend.