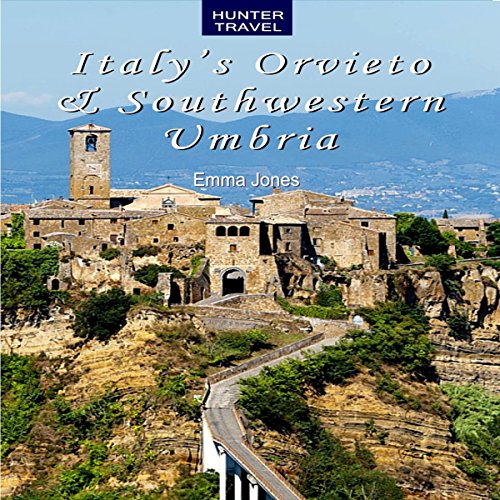 By: Emma Jones
Narrated by: Bruno Belmar
Try for $0.00

Close to the border where Umbria meets Tuscany and Lazio, the city of Orvieto and the western corner of Umbria occupy a stunning and uncontaminated countryside that ranges from basalt and tufa precipices in the volcanic hinterland to rolling hills and alluvial plains of the Paglia and Tiber rivers, both of which are now regional parks. It is a history-rich area, which has seen much action since the Etruscans first inhabited the area some 3,000 years ago. Halfway along the A1 highway between Florence and Rome, the unforgettable architecture of hilltop Orvieto gives a strong indication of the important role the city has played since Etruscan times. Standing on a single mass of tufa (known as la rupe, or the cliff), the Etruscan city of Velzna ruled here from the seventh century BC until the Romans destroyed it in 264 BC. A striking underground city still survives from that time. It was reconstructed in the fifth century, when it was called urbs vetus (old city). Pope Clement VIII fled here during the sacking of Rome in 1527 and thereafter it became a retreat for the popes. The above-ground settlement was during this time that the city reached its peak that saw the Gothic cathedral constructed and the town remodeled to befit its illustrious guests. The historical center is small enough to cover in a day, but it's worth hanging around to explore the lush valley, where its famous wine is produced. Tear yourself away from Orvieto if you can and head across the Tiber River Regional Natural Park to the beautifully preserved town of Todi. On its main square, Piazza del Popolo - one of the most beautiful in Italy - a break in one of the pretty caffès offers the chance to soak up the great view over the city Duomo, palazzi and surrounding countryside. A lush green valley between the Tiber and Nera rivers, the Amerino is a striking landscape of ilex groves, vineyards, olive groves and chestnut forests centered around one of the most ancient of all Umbrian towns, Amelia.

The first several chapters are comprised solely of lists -- chronology of historical periods, names of green areas etc. I can not get beyond them and am giving up. The narrator sounds like a tour guide.