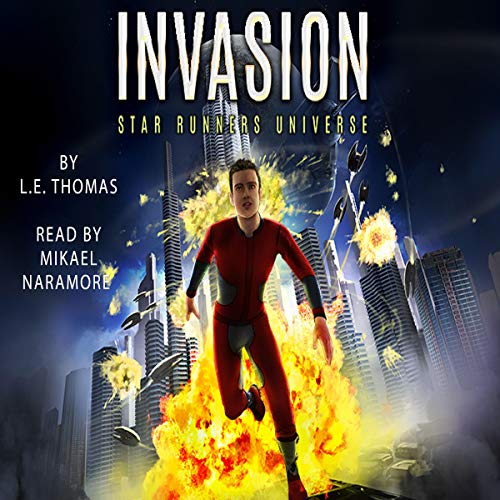 Nat Hodges' life as he knew it ended the day the Zahl Empire invaded his world, Tarrafa.

Sweeping through the initial defenses in a matter of days, the Zahl destroy everything Nat had ever known. Traditions and customs are outlawed.

Living in a homeworld occupied by an oppressive force, Nat faces the choice of fighting a seemingly hopeless battle for the past or succumbing to the overwhelming power of the future.

A brand new entry point novel in the Star Runners Universe, Invasion is the gripping tale of one young man's experience when an unstoppable armada from another world decimates his planet.

What listeners say about Invasion

Love this fresh new science fiction universe! Action from beginning to end! Compelling story, characters that'll captivate you and a world that will blow you away! An excellent introduction to the Star Runners Universe! The narrator couldn't of been better! His acting pulls you in even more and keeps you interested!

Now this I Really enjoyed

Awesome characters and if you like space opera .. this is like that .. Plot lines usually I figure out easy. The author saw me coming because it's not as I expected. I'd say some of it is but then it's changed up. refreshing. Some pretty nifty tech in here that I wish was real. the world building in places is really descriptive. military tech, space ships, destruction, and intrigue ..either way I'm hooked and looking forward to the next.