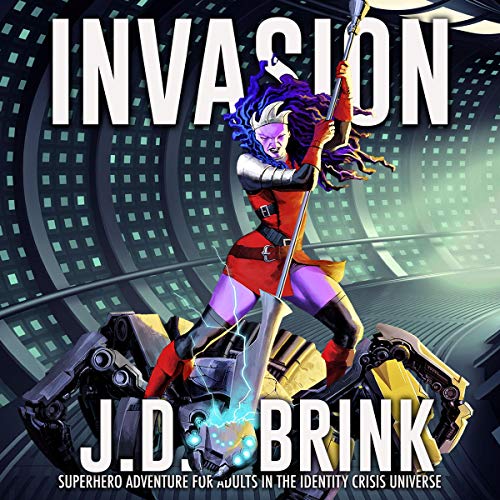 Alien gladiator Ballista escaped to Earth. They call her a "superhero" here, whatever that is. The monsters hurtling through space call her "prey".

Ballista never knew her own people. Since childhood, she has fought and killed for the entertainment of tyrants. But now, on Earth, her peerless combat prowess has found new purpose.

And new allies. Adam Smasher’s ego outweighs his exponential powers, but he means well. And Symian deserves far better than the dominant species here is willing to give him. Humanity has potential, though. Ballista can see herself making a home here.

Until they arrive. Soon there may not be a planet left to call home....

In the genre-shattering tradition of Guardians of the Galaxy and Avengers: Infinity War, Invasion is a non-stop romp of superhero action, space opera adventure, and pure explosive fun. J. D. Brink’s popular Identity Crisis Universe warps into the future and the present will never be the same. A must-have listen for fanboys and fangirls of every timeline!

The Identity Crisis Universe (IDCU) takes the comic books you grew up on, gamma-irradiates them, and sets them loose upon the world!

What listeners say about Invasion

A monkey, a gladiator, and a scientist walk into a

. . . a bar. Ok, so it's more like a Gorilla, a Gladiator, and a SUPERPOWERED scientist actually defend a space station. So, what you get here is a combo sci-fi superhero cinematic action blast. It plays out almost like Aliens 2 with superheroes, just substitute the marines for the heroes and biomech monstrosities for the aliens and there you go. It's that kind of action, fun, and excitement. Best of all, no Newt!

Adam Smasher is easily my favorite character. Not that you'll have to pick, as all three of the heroes are fun if not a little less than three dimensional. I think that Brink sacrificed a little characterization for more story development. They aren't flat, it's just that you don't have a lot of time to get to know them before the proverbial crap hits the fan. And I have to say that the action is fast, frantic, frenetic, and fun. Once things get going you won't be able to catch your breath. The story is three hours long, so you have an intense pace from start to finish that never lets up.

The tag team male/female narration worked well, but there were sound quality issues at various times Loren spoke. I don't know if they recorded seperately and spliced things together, but it was noticable. This is the only issue I had with this story. Otherwise, five stars across the board, but I could not let this slide. It wasn't annoying, but it was noticable. Even though I did receive a promo code for this review it in no way influenced my considerations of the material, and in fact, inspired me to be more honest. In fact, getting a code generally makes me harsher as a reviewer as I am more often concerned what someone like Me will decide based on my review.

The Volans space station is attacked by biomechanical monsters. Three very important people are the designated to protect it: Adam Smasher, a physicist with superpowers; Symian, a very smart gorilla; and Ballista, a gladiator from another planet and without a past.

This was a fun and quick read. I just wished there was more character development so that I could care for the heroes in the book, but there was plenty of action to make for it. There was also unexpected and somewhat forced romance. I just never seem to get why forced romance is included in books, but I guess it’s not easy to make it more credible if there is little character development.

This is a mix between sci-fi and superheroes. We are reminded again and again of Adam’s godly capabilities and some other details that make the characters unique. Fast, fun, and forgettable listen.

What I really enjoyed was the duet narration, which is something seldom done. Anthony Bowling and E. L. Loren’s narrations were almost seamlessly alternated. Each of them delivered great character’s interpretations and brought the characters to life. The only setback is that Loren’s parts had a couple of noticeable audio edits that were a bit distracting.

I would recommend this audiobook to sci-fi fans, especially if they are into superheroes literature, and want a quick and refreshing read.

I loved the Characters.

This is a classic Science Fiction adventure with all the familiar characters. The team is large enough yo find someone to identify with yet small enough not to overwhelm. There's a nice twist at the end that leaves you wanting more.