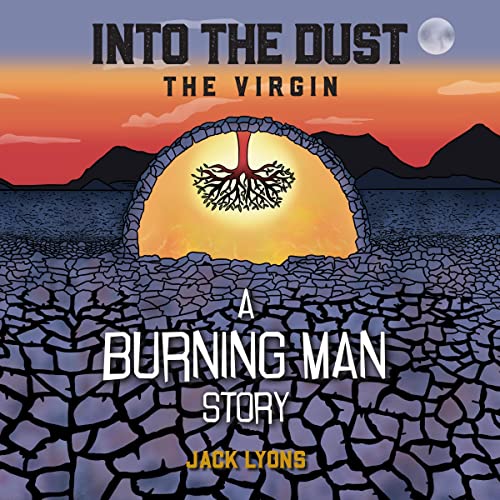 Into the Dust: The Virgin

By: Jack Lyons
Narrated by: Marnye Young
Try for $0.00

Burning Man is just a hedonistic music festival, a decadent party for burnouts, druggies, and hippies. Or so Diane believes, until an unexpected invitation from her closest friend opens a door to unknown possibilities.

Leaving her carefully ordered life behind, Diane accepts her friend's invitation and immerses herself in the harsh, unfamiliar environment of Burning Man. After an intense, life-changing two weeks of unimaginable experiences, she emerges into a reality more extraordinary and rewarding than she ever could have hoped for or imagined.

Diane's world will never be the same.

What is Burning Man?

A place made sacred by people who need a sacred place.

Why are people drawn to Burning Man, and what brings them back again and again? What actually happens at the maligned, misunderstood, iconic event staged in the middle of a Nevada desert? More importantly, what happens to the people who go?

What listeners say about Into the Dust: The Virgin

Amazing adventure into my most intense dream

I am from Scandinavia and have 2 kids so going to burning man is extra challenging- but I am intensively dreaming to go. I have been to more than twenty hippie festivals in Europe - some in remote challenging areas- so I can imagine some of what to expect at Burning Man. But your book took me on an adventure to my most intense dream. I was there - I was right in there in the RV after the shower - I cried in the temple - I too needed that last bike ride… thank you from the deepest of my heart and soul for letting me experience the energy of burning man ❤️ (plus I gathered valuable tips for surviving and camp living)

The narrator made it all come to life. I have listened to audiobooks for years and years - but this performance stood out and made a huge impact on me. I felt so close to the experience and laughed out loud when we met the old grandma - and I needed a beer that night in the pub ❤️