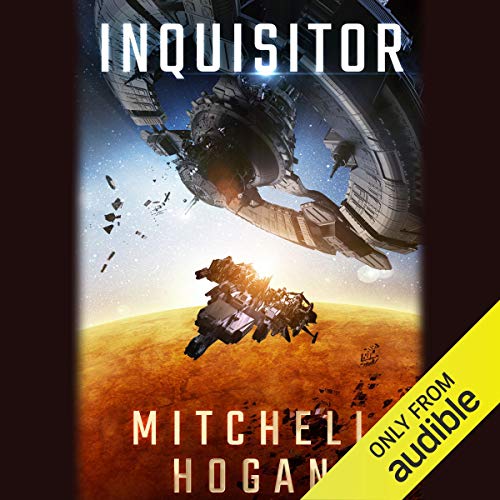 By: Mitchell Hogan
Narrated by: Allyson Johnson
Try for $0.00

From the Aurealis Award-winning author of A Crucible of Souls.

To Inquisitor Angel Xia, it was just another corporate killing on a backwater planet. But as the bodies begin to pile up and she finds herself a target, she realizes she's stepped on one toe too many. Barely escaping attempts on her life by powerful agents with seemingly limitless reach and influence, Angel senses even her co-Inquisitors can't be trusted. But as the web tightens, she receives a cryptic message from a computer program claiming to be a little girl in desperate need of her help. She insists she's being held prisoner by a major corporation, but is this just a trap to silence Angel...permanently?

Now a fugitive with her life inextricably linked to the girl in the program, Angel is taken to extremes she never knew she was capable of and to forgotten places at the edges of known space that hold the darkest secrets of humanity and the greatest threat to its future.

What listeners say about Inquisitor

Dammit, I liked it.

After I got through the initial part of the book, I kinda felt this book was just a rehash of ideas thrown about for decades. I was all set to shred the book apart. Dammit. I actually liked it. Although it did end up where I thought it would, it was a bit unique...not perfect, but I was entertained.

Note, it really could have been better...it is a rehash, and the some of the steps through the book felt forced...but dammit, I still liked it.

Well, I hope there is a sequel...maybe I can dislike that one.

Mitchell Hogan is the author of the popular fantasy series Sorcery Ascendant Sequence, full disclosure this is one of my recent favorites. Inquisitor started out as a far future detective thriller but quickly morphed into a face paced space opera. The protagonist Angel really displayed some moral fortitude which stands out in a fictional age where it's sometimes hard to distinguish between the bad guys/ gals and the heroes. Allyson Johnson who I recognized right away as the voice of Honor Harrington delivered another flawless performance. I can't wait for the next installment
-Chris

Would you try another book from Mitchell Hogan and/or Allyson Johnson?

I read Hogans other two books first, and it is difficult to compare this book with his other two. Hogan's other two books are the BEST sci/fi books I have read yet and compare equal to 'The Martian'. As for the reading by Ms. Johnson it's ok but I wouldn't pick a book because of her narration.

Ally did well considering that the main characters are female.

Possibly, if done like 'Blade Runner' it could make a interesting movie.

Don't judge Mitchel Hogan by this book. I can't wait for his next book to be released. He can 'do' sci/fi magician better than anyone. Check out "Blood of Innocents" and "Crucible of Souls", you won't be disappointed!

great narration of a see through plot that goes in circles. not what I had in mind, though it warms on you near the end

Would like to have more to the story and some different perspectives. It's wrapped up at the end so doesn't seem like it will continue.

ready for the next one

A great read with a great narrator, the action started from the start and went right through to the end with a nice twist.