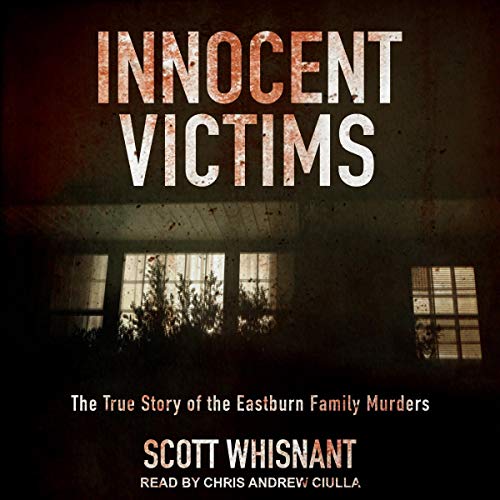 By: Scott Whisnant
Narrated by: Chris Andrew Ciulla
Free with a 30-day trial

On Mother's Day, 1985, the bodies of Kathryn Eastburn and her two young daughters were found in their Fayetteville, North Carolina, home. Katie, an air force captain's wife, had been raped and stabbed to death. Kara and Erin's throats had been slit. Their toddler sister, Jana, was the only survivor of a bloody killing spree that terrified a community still reeling from the conviction, six years prior, of Dr. Jeffrey MacDonald for the savage slayings of his pregnant wife and two daughters.

The Cumberland County Sheriff's Department soon focused its investigation on US Army soldier Tim Hennis. Detectives and local prosecutors built their case on circumstantial evidence and a jury convicted Hennis and sentenced him to death. But his defense team refused to give up. Piece by piece, they discredited the state's case, exposing false testimony, concealed evidence, and prosecutorial misconduct. At a second trial, Hennis was found not guilty and released from death row.

But an even more stunning turn of events was yet to come. Twenty-five years after the murders, the North Carolina State Bureau of Investigation tested a crucial piece of DNA evidence from the crime scene. The shocking results led to an unprecedented third trial to determine Tim Hennis's guilt or innocence.

What listeners say about Innocent Victims

The "Publisher's Summary" should include the fact that this book was originally published in 1993 and has been re-released with a short epilogue. Because the release date is listed as October 2019, I was expecting this book to be written from a 2019 perspective, so anyone else expecting the same will be disappointed. The rest of this review contains spoilers, just fyi. I was familiar with the broad strokes of the case and purchased the book to get more information/better insight into the story, but the part I was most interested in -- the re-opening of the case, the DNA evidence linking Hennis to the murders, and the 3rd trial -- was presented with superficial detail in the epilogue and wasn't integrated into the rest of the book. The author is also very biased in favor of Hennis and the book reads as if it was written with Hennis or his lawyers. This was somewhat understandable once I realized the book was originally written in 1993 to tell the story of a miscarriage of justice, but this framing of Hennis as a persecuted, innocent man is difficult to stomach given the DNA evidence definitely linking him to the crimes in 2010. Unfortunately, the author dismisses the DNA evidence and clings to Hennis' innocence. I find unbelievable and offensive Hennis' and the author's claim that Katie had consensual sex with a man after knowing him for 30 min, and then was coincidentally raped and murdered by a different man a few days later. Because the release date is listed as October 2019, I was expecting this book to be written from a 2019 perspective that would detail the crime and first trials, Hennis as the "wrongfully convicted" man and the media surrounding it (including this book, apparently, and the TV movie of the same name), the re-opening opening of the case, and the final trial. Hopefully another author will write that book.

I listened to this book while I was walking. I ended up walking much further because I wanted to find out what happened next. I appreciated the thoroughness of the author and the fact that he compared each trial to the next. Being a retired police officer I had some doubt (not to the level of reasonable) about guilt or innocense so the ending did not surprise me at all.

This story is unbelievable in this day in age. With the laws that we now have. How is this possible! I sit here asking myself if this Could happen to Tim it could happen to anyone. The fact that the Army became involved for the sole purpose of trying this man a third time has left me flabbergasted!. This story leaves me really worried for future generations.

I’m not a fan of the readers doing the fake accents.. this dude didn’t do that much. Good story. Our judicial system can be scary...

I got this on audible, and listened during my commute. I was not familiar with this case prior to this book. I highly recommend this book for anyone who reads/listens to true crime. There are some twists and turns that I sure wasn't expecting. The book left me feeling frustrated with the State of North Carolina, and how they could play with one man's life. I know how I feel about this case after reading the book, and I think the state should be absolutely ashamed of themselves. I think this is a story that needs to be heard by many. The author tells this in a matter-of-fact kind of way, which I appreciated. You won't be disappointed with this purchase.

The Outcome Left Me Flabbergasted

I will try hard to avoid spoilers in my review of this gripping true story! This Audible book was incredibly interesting to me: the author managed to present a verbal portrait of such a likeable person (Tim Hennis) who was charged with murdering an army wife and two of her three young daughters. Very little evidence confirming his possible guilt made it into the trial but prosecutors were convinced they had the correct perpetrator. I was heartsick worrying about Hennis’ fate and wondered how defense lawyers would discover who the real culprit was...and would we ever find this out? I will admit that some court testimony did become lengthy but the information was important to know. However, I advise readers to not give up near the end of the story though (thinking enough details had already been discovered) because very near the book’s end, the real killer is revealed and I could barely believe which person (from the storyline) had committed that crime! It’s a well researched, amazing book in my opinion and I recommend it highly.

I've been a true crime listener for years. this is one of my favorites. I'll listen again

An excellent story performed well. It definitely had me excited to listen to what's next.

Interesting story, but the back and forth explanations of the prosecution and defense during the court cases were so tediously monotonous. It went on an on! Snore fest! The story has such potential!

The author asks a question that I can answer, Tim Hennis; he is the person that sleeps at night after cutting the throat of two babies. The writer was very sympathetic to a mass-murdering, rapist & baby killer. It fills me with rage, an eye witness who was able to give a good description of the offender, an offender who had been to that home and got a dog from this unfortunate family got released from prison. Why was this eyewitnesses testimony dismissed? And some women who only came forward much later believed? This murderer got to live his life with his child & wife even going on to have more children while two babies and their mother never got that privilege. I don't know how the lawyers, jurors or his family sleep at night after having made every effort to free a very sick individual — my sympathies to Gary and Jana. I found the book slightly frustrating in the tone it took towards a monster as if he was the victim. The victims are Kathryn, Kara, Erin, Gary and Jana Eastburn. His lawyers even advised him to get out of the Army they must have known the evil that they released Tim Hennis would face justice one day, he was just too arrogant to think he would be accountable.