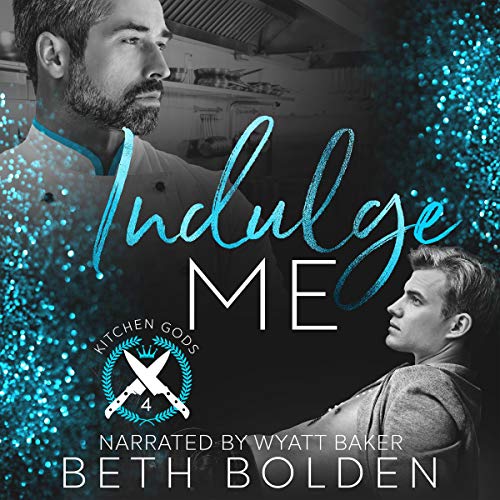 By: Beth Bolden
Narrated by: Wyatt Baker
Free with a 30-day trial

Throughout the restaurant industry, Chef Bastian Aquino is a notorious control freak. For two very long years, Kian Reynolds has worked for Bastian as his special assistant, doing whatever he and his restaurant need. The toughest part isn’t even all the impossible tasks he expects Kian to complete flawlessly — it’s the hopeless, endless love he feels for his older boss.

Falling for someone so far above him might be agonizing, but at least his feelings aren’t unrequited. Bastian fell in love right alongside him, but at the very beginning, they made the choice to abstain for logical, smart, professional reasons.

But love isn’t logical, it isn’t smart, and it definitely isn’t professional. It defies containment, even by Bastian. While he watches Bastian struggle with their attraction, Kian finally comes to the conclusion that he’s done.

He’s done standing off to the side, done not getting any of the credit, done letting Bastian define the boundaries of their relationship. Most of all, he’s done waiting.

Indulge Me is an 85,000 word contemporary romance, featuring an enormous amount of pining, a boss/employee relationship, an age gap, and very delicious risotto. It is the fourth and final book in the Kitchen Gods series, and to receive a fuller, more enjoyable experience, I would recommend listening to at least one other book in the series first.

What listeners say about Indulge Me

I was so glad to finally get Kian and Bastian's story and it was definitely worth the wait! I think this is definitely my favorite of the series. We've seen glimpses of these two throughout the other books in the series so I came in with a good sense of these characters. There is so much more to Bastian than what others see, and Kian truly sees through his rough exterior to the real man inside. Their journey to their HEA is rocky, humorous, HOT, and an all around great story that wraps up this series perfectly! The narrator was spectacular with the story and all of the different characters and their emotions. I voluntarily reviewed a gifted copy of this audio book.

I love Bastian and Kian! I couldn't wait for their story and I wasn't disappointed. These two can't deny the attraction between them. Beth Bolden has made me love these two story so much. Then Wyatt Baker makes me fall in love even more. He does such an amazing job with the narration. He just brings everything to life. Love this beautiful story!

Bastian is an exacting chef that rules his kitchen with an iron fist. Kian is hired right out of culinary school to be his intern. The attraction is immediate but Bastian tries to be the bigger man and curb his attraction. The way it all plays out is not without pain, misunderstanding, and acceptance but it such a beautiful path. I love Wyatt Baker as a narrator and this final book of the series has kudos from me!

How, oh how, did Beth Bolden manage to make me fall in love with a character that I’ve hated for so many books!?!? Amazing! I adored this story and the narration was excellent!

I enjoyed the dynamic between Bastian and Kian. Seeing the "bastard” had a squishy sweeter side was fun. I wasn't sure how Beth was going to pull off making Bastian likable, but it worked. His prickly side was still there, but you could see his reasoning and the genuine caring behind his decisions. It was intriguing that they had so many similarities in their personalities, but expressed in slightly different way. Just the right amount of kitchen drama for my taste. Great narration. I enjoyed it.

I liked Kian and Bastian’s story. There were moments I found myself distracted from the story, but it was overall well done. There was great chemistry between the main characters. I liked that they didn't change who they were but instead learned to comprise. For the most part, their journey is exciting, and the arc is relevant. I recommend this one too (I listened to book 3 and reviewed - I've meant to go to the beginning of the series.) Wyatt did a great job with the narration.

This is the one I had been waiting on and it certainly did not disappoint! This series just got better and better with this as the final culmination. It was my favorite of the four and Wyatt Baker did a fabulous job at narrating it. Loved it!

This is a light fun sweet love story. Sometimes overly saccharine sweet and it went a bit overboard for my taste. If you enjoy your romances like that, this one is a good choice for you. The writing is solid, the story has a great flow and it is flawless,Also , I didnt feel any real connection between our MCs going deeper. The narration was great though

I adore how Bastian seems like such a hard hearted jerk and runs that kitchen with an iron fist but he can't resist Kian. And, Kian, oh you sweet soul. Couldn't resist that hard exterior. So good!!

Indulge Me is the perfect ending to a wonderful series. I have enjoyed reading the Kitchen Gods series from book 1 and have eagerly been waiting for Kian and Bastian’s story. I was not disappointed. These two have been circling each other for way to long. It's time to show up or go home! Boy do they show up. They have great chemistry both in and out of the kitchen. Loved it! Wyatt Baker does a great job of narrating this story and bringing these characters to life.

I absolutely love this series, and Indulge Me is probably my favorite! With a beautiful age-gap romance, great characters and a wonderfully written story, it’s easy to see why. Kian and Bastian are so good together, with chemistry both in and out of the bedroom. Wyatt Baker is not a narrator that I’ve come across much, but he has done an outstanding job bringing Kian and Bastian to life! Great read & listen!

Great ending to the series

Bastian and Kian were great together. Although I wanted to knock them both upside the head many times because of their lack of communication, I also enjoyed seeing them grow both as individuals and as a couple. They were so stormy and passionate. Wyatt Baker did an excellent job of bringing the sizzling chemistry between them to life.

This was such an excellent ending to this series. I loved this audiobook just as much as the prior stories. This will definitely be a series I listen to again and again.

This story was such a good listen. Beth Bolden really knows how to touch on love an heartfelt confessions. Holden’s build up between the characters and their balance of work and personal felt realistic and raw. The real life struggles of balancing such a coexistence was presented so well. The story had me listening far into the night when I definitely should have been sleeping but I couldn’t put it down. The narration was excellent. Clear, and crisp, a great speed and pace of words and vocal expression brought life to the story. I would definitely listen to more from both the author and narrator.

Beth Bolden and Wyatt Baker was amazing. Will be looking into the previous books. This book was given to me for free at my request and I provided this voluntary review.

This is a perfect finale to the Kitchen Gods series. I don't want to say too much, because you really need to read all the books to get the full flavor, and I don't want to give any spoilers, but I loved these characters. I loved the growth, and the coming together. The first half of the story is all sexual tension, angst, and denial of the MCs feelings, then - BOOM - Kian decides to get what he wants, and the passion explodes. But this book is about more than just sexual needs. Kian has professional hopes and dreams that he wants fulfilled, too. Can he get that with Bastion or will he always be in his mentor's shadow? There is great chemistry, some fun, and a bunch of relationship angst, as these two try to keep their relationship professional in spite of their feelings. But the heart wants what the heart wants, and love always finds a way. I really enjoyed this whole series. I received a free copy of this audiobook from Gay Romance Reviews and this is my honest, voluntary review.

They finally give in!

🌟🌟🌟🌟 4.5 stars 🔥🔥🔥🔥 Heat Level: 4 (explosive level hot!) 🎧🎧🎧🎧🎧 Narration: 5 Oh my God, the angst!!!! A great tale of falling in love with your mentor but fighting the connection at every stage to avoid jeopardizing your working relationship and your dream to become a chef. This story challenges what it means to fall in love and how deep that love can go. Head Chef and restaurant owner, Bastian “the Bastard” Aquino is enamored by Kian Reynolds upon first meeting him and must have him in his kitchen. Little does he know that this would spark a change in him he didn’t see coming and a challenge he may not be strong enough to face. While they work together, they inevitably fall for each other as they make each other better and help each other grow through work, the kitchen, and their lives. They both fight their connection until they finally realize (2.5 years later) that their feelings and love for each won’t fade or diminish with time and their connection final explodes with all the passion they’ve been fighting! Their coming together is build up so well by Beth that you can’t help but go over the precipice with them!!! I really enjoyed this story even though too much angst frustrates me. I actually enjoyed this buildup as it seemed more logical than other angst-filled stories. I loved the additional characters and now need to go back and read the rest of the series. I love a good kitchen drama and this was the best I’ve read! Well done Beth, I’m now a fan!!

Bolden's 4th book of the Kitchen Gods series is passionate and powerful. I have been waiting for these two and I am not disappointed. The dynamic is hotter than the kitchen they are cooking in. Baker's narration makes me melt with all sorts of emotions. Truly a capstone in this series!

Indulge your senses in this listen

This was one of the most amazing listens of the year for me, the story was brilliant and Wyatt Baker manages to bring the book to life. The narration was stunningly done.

I. loved this cooking romance, Kian proving himself and Bastien recognizing Kian. They moved out of workmates slowly and I like the struggle to get it right. they are hot together and it came through in this audio. I love Wyatt Baker's voice. its very enjoyable to listen to.. I thoroughly enjoyed this book and definitely recommend it.