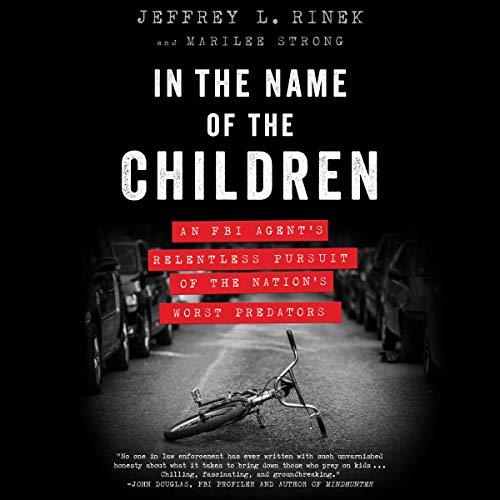 In the Name of the Children

FBI Special Agent Jeff Rinek had a gift for getting child predators to confess. All he had to do was share a piece of his soul...

In the Name of the Children gives an unflinching look at what it's like to fight a never-ending battle against an enemy far more insidious than terrorists: the predators, lurking amongst us, who seek to harm our children.

During his 30-year career with the FBI, Jeff Rinek worked hundreds of investigations involving crimes against children: from stranger abduction to serial homicide to ritualized sexual abuse. Those who do this kind of work are required to plumb the depths of human depravity, to see things no one should ever have to see - and once seen can never forget. There is no more important - or more brutal - job in law enforcement, and few have been more successful than Rinek at solving these sort of cases.

Most famously, Rinek got Cary Stayner to confess to all four of the killings known as the Yosemite Park Murders, an accomplishment made more extraordinary by the fact that the FBI nearly pinned the crimes on the wrong suspects. Rinek's recounting of the confession and what he learned about Stayner provides perhaps the most revelatory look ever inside the psyche of a serial killer and a privileged glimpse into the art of interrogation.

In the Name of the Children takes listeners into the trenches of real-time investigations where every second counts and any wrong decision or overlooked fact can have tragic repercussions. Rinek offers an insider's perspective of the actual case agents and street detectives who are the boots on the ground in this war at home. By placing us inside the heart and mind of a rigorously honest and remarkably self-reflective investigator, we will see with our own eyes what it takes - and what it costs - to try to keep our children safe and to bring to justice those who prey on society's most vulnerable victims.

With each chapter dedicated to a real case he worked, In the Name of the Children also explores the evolution of Rinek as a Special Agent - whose unorthodox, empathy-based approach to interviewing suspects made him extraordinarily successful in obtaining confessions - and the toll it took to have such intimate contact with child molesters and murderers. Beyond exploring the devastating impact of these unthinkable crimes on the victims and their families, this audiobook offers an unprecedented look at how investigators and their loved ones cope while living in the specter of so much suffering.

What listeners say about In the Name of the Children

This book was what I was looking for: a first-hand account of how an FBI agent investigates crimes. At times, I had issues with how the author reacted or portrayed his emotions, but I shouldn't, because he was presenting the truth as he saw it. I'm confused by the reviews that say the narrator's voice was too flat and lifeless. At times, I wondered how the narrator could work so much emotion into the telling, to the point where it seemed like he was going to crack.

I really want to listen to this book but I truly cannot listen to the story of someone who was so emotionally committed and involved in his career being read by someone who seems completely unaffected by the subject matter. It sounds like he’s reading a traffic report or announcing a baseball game or something and it’s so distracting I can’t finish it...I’ve listened to a lot of audio books written by former detectives and FBI agents and most of them aren’t particularly well performed by the reader but this one actually bothers me so much I can’t listen to it. I’m sure the narrator is a lovely fellow but you cannot read a memoir like this without any emotion or thought given to cadence, tone, etc.

Tough listening to this speak and spell narrator so coldly and robotically divulge such a sensitive, horrific topic.

There was absolutely zero inflection or emotion present in the reader’s voice. I honestly thought it may have been the same automated voice that answers when I need to pay my credit card company.

As far as the content of the book itself, there was a lot of unnecessary personal anecdotes on the part of the author.

For that reason, the book seems to lack focus.

This issue is somewhat remedied as the story progresses but is still a consistent issue throughout.

The subject was interesting but the writing was boring and tedious. His hyperbolic style was exhausting. Honestly, by the end I found the author a bit arrogant and over dramatic. Wish I could have returned it

The narrator was so awful! I almost returned this book a couple times because it was so robotic and weird but I’m glad I stuck it out. Be warned..you can’t “un hear” the truly horrific cases Jeffrey was involved it. I had to take several mental & emotional breaks from his book.

This book will take you on a rollercoaster of emotions as you learn about some of the most violent offenders. There are times I cried and times I laughed. Its an interesting look inside the workings of the FBI and those they protect.

Have not read the full book

I’ve not read the full book but excited so far. Kind of wish the author Jeffrey Rinek would have read the book. I heard him on a podcast I listen to and he has a very expressive voice and I appreciate that when listening to books.
Obviously it’s not stopping me from continuing on.

It's not story driven, its a collection of accounts about the authors involvement in various crimes, most not involving children, despite the title. Author casts himself in the typical trope of a law enforcement officer who is the only officer among his peers who is interested in solving crime instead of pursuing career status, and thus casts himself as type who is always ruffling feathers because he is such a good guy who knows everything and his peers just get in his way. Don't expect this book to inspire confidence in what is supposed to be our highest level of law enforcement.

I struggled with this book. I don't know if all former agents have a model when they choose to write about their lives and cases, but every one I've read had the same tone. three was interesting information about some cases that I didn't know, but I just didn't vibe with it. it felt hollow and for a man who's lived such an amazing unique experience I thought there'd be more to it. and I hated the narrator, but that's not how fault he isn't Kevin Pierce

i was really looking forward to listening but the narrator was too robotic listen.

It’s a testament to how good this book is that I stuck with it despite the narrator, who unfortunately sounds like a sat nav.

This book was excellent.

I feel bad saying this, but the only thing that spoiled the enjoyment was the narrator.

Some of this was hard and unbelievable to listen to but fascinating none the less. What a brilliant job this man did. A true insight into the life of an FBI agent.

Superb and inspiring account of FBI agent dealing with vulnerable children, but the narrator sounds like an American game show host and spoils it

Mixed views on this one.

The narrator was dreadful, he sounded more like a robot than a robot. The case studies were heartbreaking though. There were some interesting insights but not enough of them. I applaud Jeffrey though for his dedication. As I said, it's a mixed bag. How the narrator got his job I will never know. Unless he is a robot of course!

I didn’t want this book to end! It was so interesting. The voice was a bit monotone but I got used to it.

a truly heart reaching portrayal of a life committed to helping children, taking a toll on him and his family while saving so many but loosing even more

This excellent firsthand account of abhorrent crimes against children is at best a fascinating insight, and at worst devastating. I had to stop a few times, turning it off to absorb the evil being described.
If you like true crime this is a must. The narration is heartfelt, and a couple of times the narrator wobbles with emotion.
These child victims will not be forgotten.

Fascinating perspective & casefiles, commendable effort. Worth a listen, difficult to listen to details in some parts (expected) but some of the more surprising moments have to do with the authors own vulnerabilities. Narrationbworked for the most part, although it had a slight text to speech affect, you can hear a trailing "t" effect added at the end of some sentences , but you get used to it & it does actually work well with some areas of the storytelling.

I had to return this because I found the voice of the narrator so distracting and at times inappropriate when explaining truly harrowing circumstances. I am Australian so I may be more sensitive to thick American accents, but in my opinion the narrator would be better suited to action movie trailers, not a book about child sex crimes.

It made me cry but I listened to every word. It’s a truth everyone needs to hear in hopes it will make you stop and think and be a better person.

A privilege to listen to!

An amazing & at times heartbreaking account of an FBI agents challenging career including an honest insight into how a family is effected... This audibook also gave me a different perspective of law enforcement + reminded me they're human too. Thank you Jeffery Rinek for all you've done during your career & for sharing your experiences so honestly through this book/audibook...

This was a good read, dealing with harrowing subject. It was very interesting and sad.