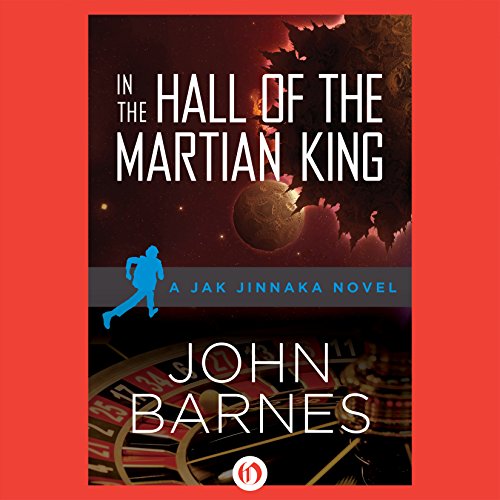 In the Hall of the Martian King

In the Hall of the Martian King

With the soul of 36-century humanity at stake, Jak Jinnaka steps in... now we're really in trouble.

Jak Jinnaka parlayed his powerful family connections, unearned media fame, and consistent dumb luck into a cushy job as vice procurator of the Martian moon Deimos, an office he precariously maintains alongside his top-secret post as a station chief for Hive Intelligence - two soft jobs for an already rich, handsome, single young man in a fun-loving colonial outpost. Sadly, when his boss takes a well-deserved vacation, it looks like Jak may actually have to do a little work - keep local trade humming, maintain the Hive's hegemony, prevent the boss' pretty teenage niece's internship from becoming front-page celebrity gossip, and make sure his rambunctious visiting uncle Sib doesn't cause international incidents among the thousands of prickly petty kingdoms on Mars. Then, in one of the pettiest kingdoms of all, the lifelog of the man who wrote the Wager - a set of principles that guides all human life in the 36th century - is discovered, and the race is on for control of the holiest relic in a thousand years, with Jak in the lead and all of the devils and angels of his past howling at his heels.