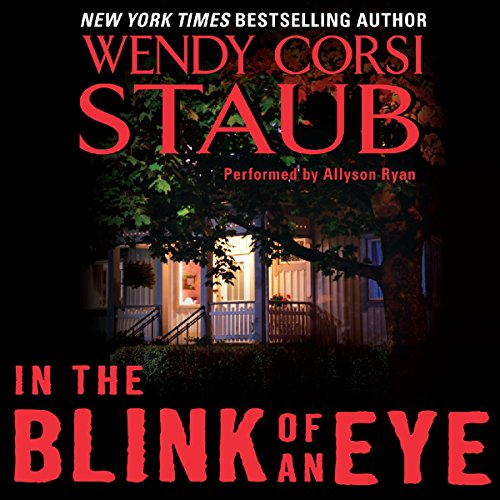 In the Blink of an Eye

By: Wendy Corsi Staub
Narrated by: Allyson Ryan
Try for $0.00

Welcome to Lily Dale, New York...a sleepy summer resort, home to a population of psychics, and the place where Julia Garrity and Kristin Shuttleworth formed a fast friendship broken only by death.

Ten Summer Street is no ordinary house. It was there, 15 years ago, that Kristin saw something on a Halloween night that would haunt her until the end of her days. Since then, Julia has watched both Kristin and her mother fall prey to whomever - or whatever - lurks there.

Now Kristin's blind six-year-old daughter, Dulcie, has come to live in Lily Dale - at 10 Summer Street. Appointing herself protector, Julia is determined to coax the secrets of the house out into the light, to discover what the little girl "sees" roaming its halls...before the murderous force residing there makes them both its next victims.

What listeners say about In the Blink of an Eye

Not enough paranormal to this mystery

It's a decent story but the narrator grates on my nerves. She sounds like Thurston Howell III when she attempts to narrate a males voice. There isn't much to add to the summary provided by Audible. Not great but not bad either, just mediocre.

The story is just plain boring. About 50% of what I've heard so far is completely irrelevant, unnecessary dialogue that adds nothing to the story other than making you want to stop listening. To top that, the narrator is very basic and not in sync with the story at all, she sounds like she should stick to reading children's stories or something but she's a very bad fit for this genre.

I'm stuck at about 1/3 of the way through the book contemplating whether or not to finish so that I can give the rest in this series a try. Or I might quit while I'm ahead and get my credit back. It's getting more annoying as the story goes on so I'm likely going with the latter.

It was well worth the read!

Loved the book! The storyline is interesting and the characters well developed. Not a big fan of the narrator she has some challenges with make voices that sounded almost comical. Several times I thought I had it figured out only to get another twist to the story. Recommend!!

Fun story with a soothing effect

I save these for evening listening. The stories aren’t rocket science but they’re fun and take my mind off the mess the world is in. In fact I set the timer and usually doze off in a peaceful frame of mind. Hope the series will continue.

As someone who reads 2-3 books a week, I run through books quickly, even if they have a slow start. Allyson Ryan's narration is HORRIBLE. She reads it like a newscaster and I couldn't even get to Chapter Four. Story was not good enough to power through. Do not read.

The Epilogue did this book in for me. It was just ok but all the information given in the epilogue was a let down for me. I picked this book after read dead before dark hoping it would be as exciting and thrilling but it was not.

I truly enjoyed this story. Haven't looked yet but I hope there is a sequal.