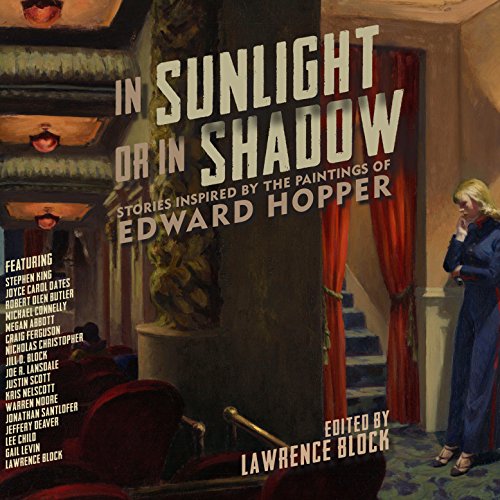 In Sunlight or in Shadow

By: Lawrence Block - editor
Narrated by: full cast
Try for $0.00

What listeners say about In Sunlight or in Shadow

If you appreciate the painting of Edward Hopper and also enjoy stories with a Noir perspective, this will satisfy both. As with any short story collection, there are some stories that are better than others. I enjoyed almost all of these beautifully crafted little stories, but my favorites were "Nighthawks" by Michael Connelly, "The Projectionist" by Joe R. Lansdale, "The Story of Caroline" by Jill D. Block and "Office at Night" by Warren Moore.
Excellent narration by all the readers.
Only one complaint. - audible, please provide a link or other access to the paintings that are the source /inspiration for each story. Looking at them is so much a part of enjoying the stories.

Struggled to make through more than a couple of stories. Great concept, but most of the stories included so much description of the painting they were based on (in the prose itself) that it was jarring. I can Google a picture of the painting, just write a story about what might have happend. Blah

Definitely not for me.

The narrators were good. The stories were definitely not for me. There are much better options available.

Hopper's Paining of the Culture

I teach Art History and found that only a few of the stories really addressed the painting the story was about. Hopper's main theme is loneliness and isolation. I've always loved NIGHTHAWKS and found that story to be truer to Hopper's vision.