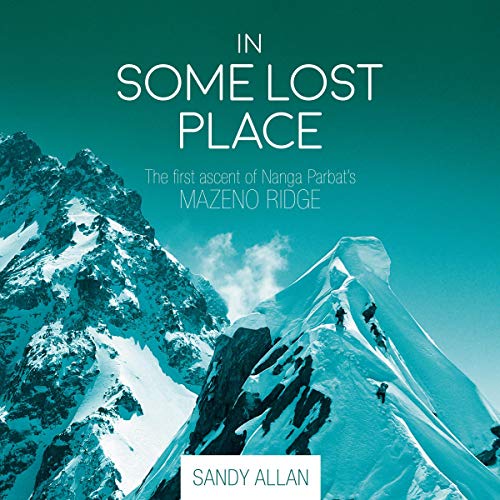 In Some Lost Place: The First Ascent of Nanga Parbat’s Mazeno Ridge

By: Sandy Allan
Narrated by: Saethon Williams
Try for $0.00

In the summer of 2012, a team of six climbers set out to attempt the first ascent of one of the great unclimbed lines of the Himalaya - the giant Mazeno Ridge on Nanga Parbat, the world's ninth highest mountain. At 10 kilometers in length, the Mazeno is the longest route to the summit of an 8,000-meter peak. Ten expeditions had tried and failed to climb this enormous ridge.

Eleven days later two of the team, Sandy Allan and Rick Allen, both in their late 50s, reached the summit. They had run out of food and water and began hallucinating wildly from the effects of altitude and exhaustion. Heavy snow conditions meant they would need another three days to descend the far side of the "killer mountain". "I began to wonder whether what we were doing was humanly possible. We had climbed the Mazeno and reached the summit, but we both knew we had wasted too much energy. In among the conflicting emotions, the exhaustion and the elation, we knew our bodies could not sustain this amount of time at altitude indefinitely, especially now we had no water. The slow trickle of attrition had turned into a flood; it was simply a matter of time before our bodies stopped functioning. Which one of us would succumb first?"

In Some Lost Place is Sandy Allan's epic account of an incredible feat of endurance and commitment at the very limits of survival - and the first ascent of one of the last challenges in the Himalaya.

What listeners say about In Some Lost Place: The First Ascent of Nanga Parbat’s Mazeno Ridge

I really enjoyed the authenticity and realness that Sandy Allan brought to this book, writing not just about the glorious parts of this amazing climb, but also the difficult parts with real emotion. I loved how he explained his thought processes and the decisions he and his team made. It's been hard for me to find audio books about Nanga Parbat in English, and it was a real pleasure to get to experience the mountain vicariously through Sandy's epic climb.

Would it have been too difficult to get a Scottish narrator? This chap's pronounciation of the Gaelic was torturous.

Beautifully told, Sandy Allan’s retelling of his amazing story comes through as honest, humble and sprinkled with human context and a refreshing insight into a mountaineer’s spirituality.
The reader is passionless and robotic, but clear and gentle, transmitting along with the text, a cool, calm and thoughtful personality in the writer.

A truly outstanding climb. One of the most amazing ever accomplished by British Mountaineers. This book brings the story of the ascent to life. At times difficult to listen to.

Just what I was after

A truly amazing tale of the human spirit. This audio book helps feed the need for adventure! Highly recommend.