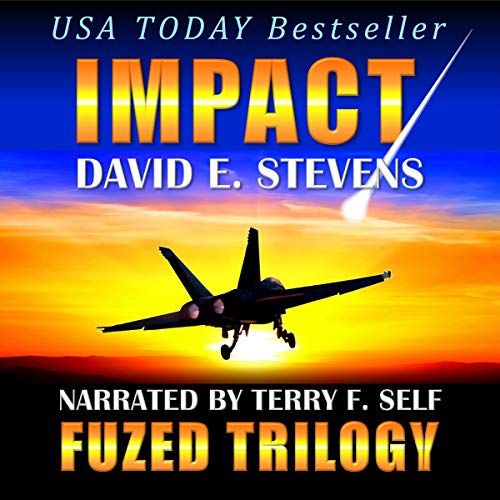 A winner of the 2016 Eric Hoffer Award for best eBook and Foreword Reviews Book of the Year (under the original title Resurrect), Impact is a thought-provoking action thriller. The nemesis, unfortunately, is not only possible, it's apocalyptic and inevitable...but also preventable.

During a routine flight, Commander Josh Logan's fighter catches on fire. Preventing the burning jet from hitting a neighborhood, he ejects too late. A year later, he wakes up in a city hospital looking like an omni-racial Olympic athlete. He realizes his body wasn't repaired, it was replaced. A genetic blend of the best genes from every race, he has one-in-a-billion abilities but no identity. Everyone who knew him believes he's dead.

Contacted by a voice only he hears, he's told humanity will be annihilated in two years.

A Navy pilot brought back from the dead to save the world? It's textbook schizophrenia...but what if the fate of the human race really rests in the hands of a man who doesn't recognize his own reflection?

What listeners say about Impact

An interesting start to a new Trilogy focused on real science and how to protect this world we call home.
Very well written and read.
This story will pull you in and you won’t want it to end.
If you like Earth based Science Fiction (real science in a fictional setting), Government intrigue (Mission Impossible), or even good philosophical novels (Where do we come from), this book is for you.

Even though it's story line that's been used so many times of saving the world, I like the out-of-the-box hero that David Stevens creates. The twist of having a dead person save the world is fresh, the only thing lacking was revealing who Jessie is or was. Terry Self does an excellent job in narrating the story and keeping you engaged.

"I was given this free review copy audio book at my request and have voluntarily left this review."

Really great book. Stevens is a brilliant and gifted author and I look forward to more great stories.

Impact. .
An audiobook with a great storyline and concept. I look forward to reading the next in the series.
I read this as an e-book back in 2017 and was pleased to see it released in audible format.
The book is good and the narration keeps the same high standard. All in all excellent entertainment.
I received a free copy of this audio book at my own request and voluntarily leave this honest review.

First - This book was given to me for free. I give this review without obligation.

The start in interesting and captures your attention. The story is good and the narration is okay. It was a little slow in parts and was more set up than action. Overall it was a good book.

The Next Voice You Hear

I always like to preface any reviews I give with this information.
I am a 68 year old female who has been an avid reader since I was around 10 or 11 years old.
I read primarily for pleasure.
I have a great many interests and do a lot of research for personal pleasure and knowledge as well.
Ancient History, Archeology, Science, Science Fiction, Fantasy, Mystery are some of the interests I have.


Disclaimer: "This Audiobook was given by the author, narrator, or publisher at no cost, in exchange for an unbiased honest review."

Andy Logan is a Navy pilot whose aircraft catches fire. As he tries to make it to a designated safe landing field, he loses his engines and while he is unable to make it to the landing field, he is able to ditch his plane in a construction site; that at least at that time, no one is around. As he ejects out of the jet, he realizes that his demise is imminent.

A year later he regains consciousness in a hospital with a different body and superhuman abilities. He looks completely different and oddly enough it seems that everyone 'sees' him differently as well. He is also able to communicate with someone he refers to as "Jesse" who tells Andy a number of things. Jesse communicates with Andy by what I would refer to as telepathy, but Andy speaks aloud to Jesse.

Jesse tells Andy that within 2 years a comet will intersect with earth and all life on earth will be destroyed. Andy can never return to his former way of life or to the woman he was married to.

When Andy was found and admitted to the hospital, he was admitted as a "John Doe" as he had been found unconscious and nude.

Even though Andy remembers what happened with the crash, he knows that no one would believe him and feigns amnesia and decides to go by the name of "Josh Fuze".


By using a number of questions, Jesse challenges Josh to try to save the world. Josh decides to research as much as he can about comets, astrophysics cosmology, physics, and other fields of science to hopefully discover a way to deflect the comet's trajectory so that it will miss the earth. Josh is able to communicate to Jesse when he wishes to make that connection to speak with him.

This is as far as I want to go with the plot of this amazing book.

What I will tell you is that this book/audiobook is Mind Candy! I was immediately drawn into the story from the first sentence and literally was on the edge of my seat all the way through the story.

I have read thousands of books in my life, and listened to a couple of hundred audiobooks and as much as I have loved the experience this book was unlike any I have ever read/listened to.


I have always had an interest in Science and also Science Fiction. There is a wonderful blending of both in this spectacular story. There is a hint of genetic manipulation or cloning, (I am not sure which), and a lot of cutting edge Science that we probably don't know about in our very real world.

This book has a very tightly woven plot with wonderful subplots that are very well orchestrated into a book that you will want to read/listen to from start to finish!

Author David E. Stevens is an author whose work I had not seen before. I was very impressed with the amount of realism in this book and after reading his bio, I was not surprised to see that he served in the Navy as a fighter pilot among other areas. (Thank you for your service, Mr Stevens!) I would read any book this man writes. He is a superb story teller and the technical information in this book are not too complex for people to understand.

Narrator Terry F. Self is someone whose voice acting I had never heard prior to this audiobook. This man is so amazing! There is a quality to his narrating that is so unusual and wonderful. His narrating just slipped into my mind and was so natural. He has this thing where he just sighs with explanations in the story line like most of us do when we are confronted with relating things that we think others might find hard to accept, or believe. You know what I mean. Someone says something; asks a question and you just sigh and think, 'well, I gotta say it', and so you do. He does this throughout the audiobook and this made the story more real for me.

His many voices in this audiobook were so varied, it was truly like listening to an entire cast perform, rather than one person with such a range of voices, tones, pitches and accents. Mr Self is someone whose work I will be listening to again.

I think this book/audiobook would interest most people. It is very action oriented and the suspense doesn't let up from the first word to the last.

Get the book/audiobook! You won't be sorry!

I Can't Praise This Enough, it is a must read!

This is just a brilliant book, it had me hooked from the beginning. The story is really interesting, unusual and action packed, the book is very well written and extremely thought provoking. I was emotionally drawn into the story and really connected with the lead character Josh and his friends.
The narration by Terry F. Self was top notch and I look forward to hearing him narrate other books.
I was lucky enough to be given a copy of this to review and it it has been a real pleasure to do so. I highly recommend this book to everyone, please give it a go, you won't regret it.