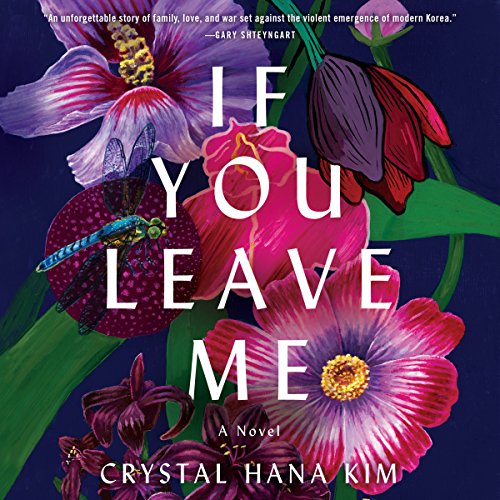 If You Leave Me

An emotionally riveting debut novel about war, family, and forbidden love - the unforgettable saga of two ill-fated lovers in Korea and the heartbreaking choices they’re forced to make in the years surrounding the civil war that still haunts us today.

When the communist-backed army from the north invades her home, 16-year-old Haemi Lee, along with her widowed mother and ailing brother, is forced to flee to a refugee camp along the coast. For a few hours each night, she escapes her family’s makeshift home and tragic circumstances with her childhood friend, Kyunghwan.

Focused on finishing school, Kyunghwan doesn’t realize his older and wealthier cousin, Jisoo, has his sights set on the beautiful and spirited Haemi - and is determined to marry her before joining the fight. But as Haemi becomes a wife, then a mother, her decision to forsake the boy she always loved for the security of her family sets off a dramatic saga that will have profound effects for generations to come.

Richly told and deeply moving, If You Leave Me is a stunning portrait of war and refugee life, a passionate and timeless romance, and a heartrending exploration of one woman’s longing for autonomy in a rapidly changing world.

"If You Leave Me is graced with truly wonderful writing; great poise, lyricism, intelligence, and an utterly engrossing portrayal of life." (Richard Ford)

"An unforgettable story of family, love, and war set against the violent emergence of modern Korea." (Gary Shteyngart)

"A gripping, heartrending tale of the birth of modern Korea filtered through the prism of an intimate love story. In fresh, often astonishing prose, Kim brings her characters to life: complicated, flawed, and hard not to fall in love with. A strikingly original work." (Jessica Shattuck)

What listeners say about If You Leave Me

Lovingly told, this talented young author unflinchingly tells a tale of love and tragedy set against a compelling historical tableau. The characters are real and human, flawed yet loveable, relatable in their shortcomings and inspiring in their growth. There is action aplenty but the pacing is fair, giving the reader plenty of time to absorb the generous lessons and metaphors. The prose is sweeping and poetic, the imagry rich and lush. Highly, highly recommended. If you love good books you will love this story!

Do not waste your time

This book was awful. I had to read it for book club and no one could finish it. I tried to listen to it as well. The narrators where monotone and did not keep my attention.

I enjoyed the characters and the story a great deal, but it jumped around a bit too much for me. Listening to this was hard because if I missed the opening of the section I wouldn't know what year it was or who was telling that section. I wish it had been a bit more evenly paced but I liked the story itself.

The beginning of this book captures the displacement and the desperation of families in war-torn Korea. The main characters are young teenagers when the story starts, entailing a love triangle that continues throughout book. By the end, the psychopathology of the characters gets extremely tiresome. The conclusion is predictable, and the book could have been edited a great deal. I was disappointed.

I love to read Asian books, and had high hopes for this one. But the story dragged and dragged. I wouldn’t recommend it for book club. Overall I’d say it was rated PG-13

A beautifully written story perfectly performed.
I loved the many sides of the tale and felt close to each of the characters.
Would highly recommend.