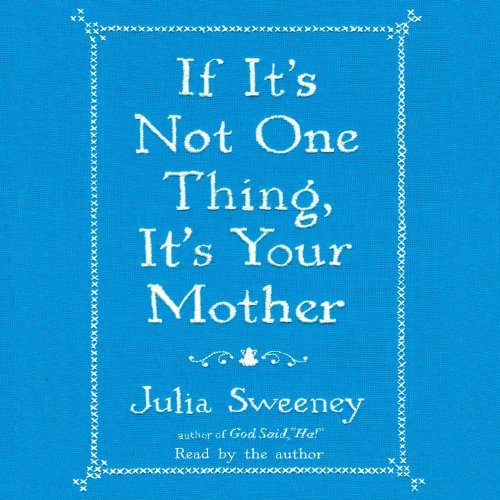 If It's Not One Thing, It's Your Mother

Julia Sweeney, the delightful former cast member of Saturday Night Live, takes listeners into the depths of her family in this hilarious and unique parenting book.

Since her time on Saturday Night Live, where she created the infamous androgynous character "Pat", Julia Sweeney has gone on to establish herself as a witty, captivating performer of one-woman shows, like God Said Ha!, In the Family Way, and Letting Go of God. She gave a TED talk sharing how she explained the birds and the bees to her eight-year-old daughter, Mulan, which ignited an incredible response. Now, when it comes to talking about motherhood, people want to hear what Julia has to say. If It's Not One Thing, It's Your Mother is her compilation of stories, revealing her painfully funny adventures and her poignant personal story of deciding to adopt as a single woman, her transition to traditional family after she married and took on the new role of at-home mother, and her insightful open-eyed wonder at the whole concept of motherhood for herself and others, too.

From being mistaken as her daughter's grandmother to her theory that people who can't make friends often resort to making children, Julia imparts a cutting edge, contemporary take on parenting, displaying a definite appreciation for the absurd. Poignant, provocative, and wise, Julia writes about parenting as only she can, laying out her mother-daughter experiences with religion, nannies, pets, schools, and much more.

A joy to listen to, this is one of the most amusing, and at times powerful, modern books on parenting.

What listeners say about If It's Not One Thing, It's Your Mother

If you have "read" Julia's previous works, especially "In the Family Way," you will find the first several chapters of this book to be a lot of review with some new tidbits sprinkled in. It's all good material, it's just material you've heard before. Perhaps this is why I can't give it 5 stars. If all of the stories were new to me, I can imagine giving it 5 stars. I started to get concerned that I had just bought a compilation of excerpts from her other work. Thankfully, that wasn't the case. There's lots of new material here that will keep you thinking and laughing.

Great introduction to Sweeney the performer!

I am a HUGE fan of Sweeney, her one woman shows and her TED talk. Ironically, the only thing I scarcely know about her is her character Pat from SNL.
This book is a great first read to get to know Sweeney, then order her other works to get greater depth. Since I listened the other way, some of the stuff covered in this latest book was a little redundant.
I did think her performance was a little off compared to the live show recordings she has done in the past for "Letting Go of God" for example. Maybe it is the absence of an audience that makes her reading sound a little stilted.
One of the topics that makes this such a fantastic listen is the growing and morphing relationship with between Sweeney and her mother. They are about as different as humanly possible, yet loving. In this current work you can feel the understanding, connection and even forgiveness between mother, daughter and granddaughter that is truly heartwarming.

Julia does a great job on the audio version. At times I was laughing out loud while at others I was deeply touched. I would recommend this audiobook.

Good but not her best

I like Julia Sweeney. This book is not as good as, for example, her performances such as "Letting Go of God". Still, I give it a good recommendation.

a woman's memoir full of reality

i found the book as a kind retreat. it was real, a bit smart, and funny at times, but always easy listening. just what this parent needed somedays!

An relaxing afternoon with a few happy tears

This book is like having a conversation with a close friend. I don't know how she manages to do that. Julia Sweeney is just so very down-to-earth and approachable as a writer.