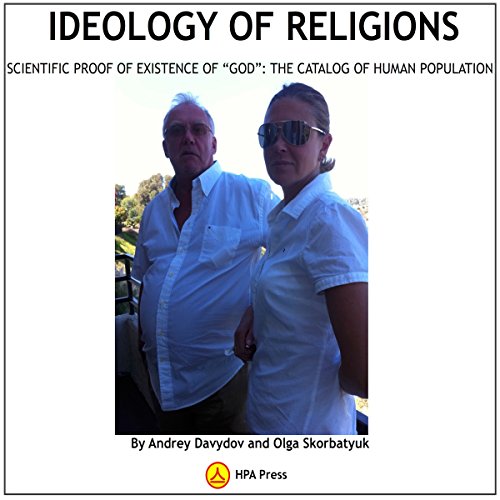 Ideology of Religions: Scientific Proof of Existence of "God": The Catalog of Human Population

By: Andrey Davydov,Olga Skorbatyuk
Narrated by: Mark Westfield
Try for $0.00

In the XXI century, "God" remains an unknown value to humans. Although "God" is the fundamental value in this world, as he is the Creator of all, a modern human cannot accept the idea of the existence of "God" due to lack of evidence that "God" exists. "Blind faith" is an indicator of low level of development of individuals, and is no longer a common stance of modern people, even those who are not well educated. People are willing to believe only that what they can see with their own eyes, test, and, of course, use in everyday life. That is normal, natural.

People only declare that they believe in "God". No one really believes in him because human intellect is created in such a way that one is unable to take something seriously without evidence. Not to mention that recipes that religion offers as a practical guide do not hold water from the point of view of a modern person. Also, in the eternal debate of psychologists - what is primary, "soul" or body - "soul" loses only because psychologists do not know anything about it. Despite the fact that "soul" (psyche) is the focus of this "science". Shortfalls of medicine, psychology, anthropology, and other sciences that study human beings affected people's attitude towards religion.

However, religion, unlike science, has existed for many centuries. Despite everything, it continues to exist today. This clearly indicates that humanity can exist without science, but not without belief in some "Higher Powers", something supernatural that, unlike modern science, has the ability to solve any problems of humans. One can admit this to himself or not, it does not matter. And, even more so, it does not matter whether this role is filled by biblical "God" (or those gods that religions offer to consider gods) or not.

New ideology of religions, created on the basis of evidence for "God's" existence produced strictly by scientific methods, can bring people back to "God".

What listeners say about Ideology of Religions: Scientific Proof of Existence of "God": The Catalog of Human Population