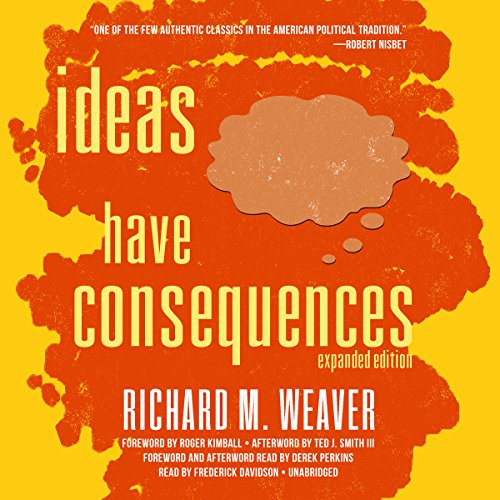 Originally published in 1948, at the height of post-World War II optimism and confidence in collective security, Ideas Have Consequences uses "words hard as cannonballs" to present an unsparing diagnosis of the ills of the modern age. The book is now seen as one of the foundational texts of the modern conservative movement.

In it, Richard M. Weaver argues that the decline of Western civilization resulted from the rising acceptance of relativism over absolute reality. In spite of increased knowledge, this retreat from the realist intellectual tradition has weakened the Western capacity to reason, with catastrophic consequences for social order and individual rights. But Weaver also offers a realistic remedy. These difficulties are the product not of necessity, but of intelligent choice. And, today, as decades ago, the remedy lies in the renewed acceptance of absolute reality and the recognition that ideas - like actions - have consequences. This expanded edition of the classic work contains a foreword by New Criterion editor Roger Kimball that offers insight into the rich intellectual and historical contexts of Weaver and his work, and an afterword by Ted J. Smith III that relates the remarkable story of the book's writing and publication.

What listeners say about Ideas Have Consequences

Weaver was, if nothing else, a prophet. His assessment of society is becoming more and more accurate in America. I also hearitly agree with his stance on private property and a loss of piety. Excellent work and a must read!

Struggled a bit to finish it due to the awful narrator. The forward and ending narration was much better. The book was hard to follow at times. I was still able to get something out of it.

The narration is good but it may be a coincidence that the narrator chosen for critique is better than the one for actually narrating the book. In any case, this book highlights that destroying "structures" in a society comes at a cost.

The author is able to verbalize the worldview one has but cannot express. It is a classic for good reason.

A Glimpse Into the Future by Stepping Back in Time

My first thought upon completing this novel was, I must read it again. There is just so much here. There are moments that one can scarcely believe that this book was published in 1948. It’s like taking a journey into the future by going back in time. In that regards you must continually shift your reference remembering when Weaver wrote this book and what was the world stage upon which he looked.

There were many great insights, but at times I wasn’t sure where it was going. Worth the listen.

Fantastic Rendering of a classic book

I cannot praise this audio recording enough. The reader is British, yet he captures the sense of Weaver’s prose with astounding fluency.

Weaver’s insights and assessment in shockingly relevant having been written almost 70 years ago. A reminder that the challenges of our day are not new. Unfortunately, the dangers of progressivism and socialism are once again off the radar of the majority of the population.

I wish I had not bought this book.