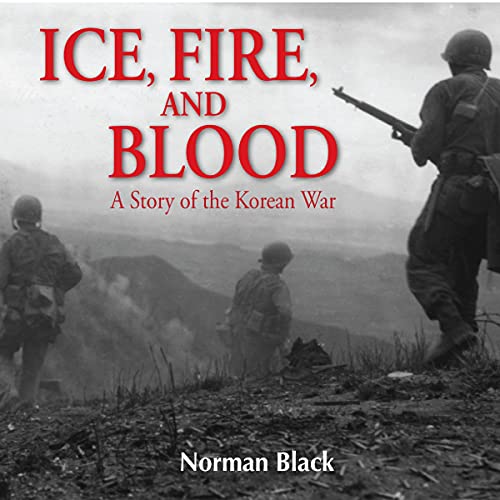 By: Norman Black
Narrated by: Johnnie C. Hayes
Try for $0.00

Ice, Fire, and Blood, the first novel of veteran journalist Norman Black, brings to vivid life U.S. combat infantrymen's experience in Korea, from late 1950 to spring 1951. The story focuses on one company of an infantry battalion and begins in northwestern Korea. It covers those periods when Chinese armies entered the war and inflicted devastating loses on U.S.-U.N. forces and the subsequent turn-around, early in 1951, after Gen. Matthew Ridgway took command. In the following months, new equipment was received, serious loses were inflicted on the Chinese, and it became clear South Korea would not be overrun by Communism.

The book includes the true story of a Korean-speaking Japanese army veteran who worked as a handyman for the battalion at Yokohama Army Base and was allowed to move secretively with the battalion to Korea, where he proved invaluable.

What listeners say about Ice, Fire, and Blood

This book is alright. It does a good job through the dialogue of capturing the disorder that plagued the American and South Korean forces at the start of the war. That said... the thing that someone brings the book down a bit IS the dialogue. There are periods of very long walks in the story where it is almost seemingly endless chatter.

Now, this is very realistic for men at the front. The wise cracking, ball busting, scuddlebutt, all that. It’s here, but there is one period of the story where the dialogue last a continuous 30 minutes almost. Just rumoring and griping. Really drug out chatter too.

Read does a fine job, I liked him, but he wasn’t helped much by the text.

It’s a cheaper buy if you wait for a sale and it’s good for that price. It’s also not a BAD book, but it doesn’t really offer anything but the very basic outlook of life in Korea during the early war period.

A Children’s history of the Korean War?

This book is essentially a brief history of the Korean War after Pusan. Rather than just presenting the facts in a logical manner, the author chose to write this book as a series of expositional conversations between Soldiers on the front. The Soldiers’ conversations, spanning grand strategy, interpersonal conflicts between leaders, etc. are wholly unrealistic and the format- using exposition rather than simply telling the history- leaves out key facts and a connections between them. Similarly, because the Soldiers spend all of their time talking about division and corps headquarters, character development is weak and as the characters are killed, the reader feels no emotional connection.

All in all, this was a waste of time and money. “This Kind of War” will give you more bang for your buck.

I study the literature of warfare - both fiction and non-fiction. This title offered the possibility of discovering a fictional viewpoint of Korean War events by someone who was there.However, the narration made me feel like I was listening to a play-by-play radio broadcast of a baseball game in the Deep South.

What was one of the most memorable moments of Ice, Fire, and Blood?

There were none. I stopped listening at 30 minutes in and deleted the title.

What didn’t you like about Johnnie C. Hayes’s performance?

No subtlety or nuance. All characters were rendered in one voice.

Was Ice, Fire, and Blood worth the listening time?

No, as I said above. I couldn't take it any more. Life's too short to endure that.

I'll probably borrow the eBook or a print copy and read it myself.