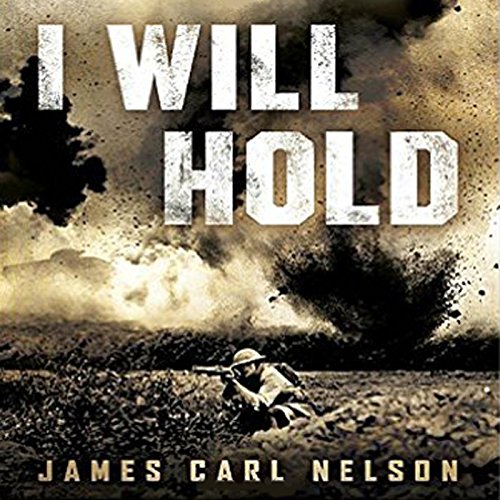 By: James Carl Nelson
Narrated by: Sean Pratt
Try for $0.00

The incredible true story of Clifton B. "Lucky" Cates, whose service in World War I and beyond made him a legend in the annals of the Marine Corps.

Cates knew that he and his small band of marines were in a desperate spot. Before handing the note over to a runner, he added three words that would resound through Marine Corps history: I WILL HOLD.

From the moment he first joined the Marine Reserves of the American Expeditionary Force in World War I, Clifton B. Cates was determined to make his mark as a leader. Little did he know what he would truly accomplish in his legendary career.

Not as well known as his contemporaries, such as Alvin C. York, his fame would not come from a single act of heroism but from his consistent and courageous demeanor throughout the war and beyond. In the bloody second half of 1918, with the 6th Marine Regiment, he was awarded the Navy Cross, the Distinguished Service Cross, the Purple Heart, and the Silver Star; he was recognized by the French government with the Legion of Honor and the Croix de Guerre; and he earned the nickname "Lucky".

I Will Hold is the inspiring, brutally vivid, and incredible true life story of a Marine Corps legend whose grit and unstoppable spirit on the battlefield matched his personal drive and sage wisdom off of it.

What listeners say about I Will Hold

As I hit the Submit Review button it appears mine is the first for the Audible format of “I Will Hold”. Based on the sample it’s no wonder why, but I like a challenge so after reading three reviews for the printed format I decided to get the book despite the sample. I was interested in Clifton B. Cates, someone I had never heard of before this book. However, what I really wanted to learn about was the full account of how ferociously the Marines fought at Belleau Wood and how they so terrified the Germans that they earned the nickname ‘Devil Dogs’.

After holding on for 19 of 32 chapters, with just over 3-hours left, I’ve decided to throw in the towel. Initially I thought my brain was simply not engaged while listening, but after making several conscious efforts to pay particular attention I realized it wasn’t me. The problem with this book is the writing and the narration; together they make this book mind-numbingly boring and completely impossible to follow. The narration itself is not ‘bad’, it’s just lifeless. This, in my opinion, is more related to the writing then the narrator. The writing jumps around so much that there's no common thread to the story so I was totally lost the entire time.

This is a collection of very loosely or barely connected events within a larger event. I can’t even say it’s a collection of short stories because there’s not enough information given for each event to actually call any of them a ‘story’. It’s as though the author grabbed a bunch of Post-It notes with scribbled thoughts on each and put them together in no particular order to create a book. Furthermore, the title is misleading. This is not told from Belleau Wood to victory. The book starts before the U.S. involvement in the war and it plods on for 18 chapters before finally getting to some sort of a point about the woods, but even then it jumps around so much that I’m not sure what battle or action is actually being described at any given moment. I’ve stayed with it long enough to reach the point where Cates sent the message “I will hold”, but the telling was so anti-climactic I nearly missed it. Lastly, at more than halfway through the book there’s still been no mention of the Devil Dogs nickname. Or, if it was mentioned, I was so catatonic from boredom I missed it.

From the reviews it appears to be a decent book in print format, but it’s definitely not decent in audio format. I gave this book more of a chance then I normally would simply out of respect for the subject matter, but I’m ending it now feeling very disappointed.

I don’t get the bad reviews.

This is an excellent WW1 book. Reader does a fine job too. If you like Scarlett Fields and Over the Top you’ll enjoy this one too. Get it. There are lots of combat narratives and this book unintentionally is one of the better flowing accounts of the fighting around Belleau Wood. I thought it was an excellent story and fitting tribute to one of the great Marine Corp commandants ever.

Very well told story or an American in WWI

Most WWI stories I've come across are... well... either boring or really poorly put together. This one reads well. Like a mix of Band of Brothers and All Quiet on the Western Front. The narrator is perfect for the story, the story has a good pace as well as being informative and detailed, and the overall story kept me entertained and curious about what was coming next.

This is a great book about the life of one of the Marine Corps' finest. I enjoyed every minute of the book; unless you're a snowflake, you will enjoy it too.

Excellent read, the story was amazing. General Cates is a inspiration to all generations, his tenacity, his leadership, his compassion for his Marines.

Reads like an official history and is short on character development. It has a basic recipe: “group X goes into a battle with group Y on the left and Z on the right; there were lots of machine guns opposing them. They started with X men and only had Y remaining. Lucky Cliff Cates survived” Repeat...
Nothing like Stephen Ambrose or E. B. Sledge.

a little jumpy and hard to follow with a tendency toward the over-dramatic, but entertaining.