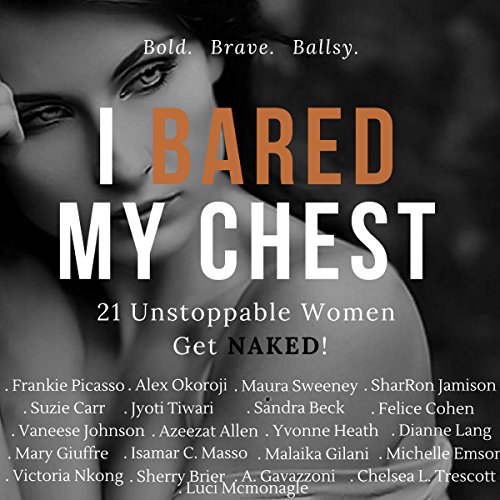 I Bared My Chest

What happens when a Canadian radio host gets together with a Nigerian actress, a bisexual Jew, a break-up coach, an American thought leader, an Indian men’s rights activist, a religious minister, an African American brand strategist, a Brazilian law professor, an African single mother of 21 orphans.... It is an anthology written by 21 brave and unstoppable women. It guarantees you laughter and tears, but more than that...it guarantees your freedom.

What happens when they team up with a transgender activist, a teenage author, a lesbian Buddhist, a divorced media queen, a television host, a prolific "lesbian fiction" novelist, a Muslim "singer", a money coach...and a cancer-ridden South African political activist? Sure the list goes on‎....

What do you think really happens when 21 unstoppable women get together?

They dig for their voices and show the world how bold, brave, and ballsy they are. That no matter where you grew up or what your life experiences have been thus far, you will find a connection to someone or some experience in this audiobook that will give you the freedom to soar.

This is not one of those depressive, preachy anthologies or a bunch of women shouting, "Hear me roar."

This is a deep, personal conversation between each woman and you, as they get naked, strip their masks, and reveal some of their most intimate secrets on finding their journeys to self.

It is a baring of one’s chest - a vulnerable yet strong conversation of failure and wins, of family and career, of sex, love, prejudice, and romance with money.

This is an honest audiobook - that will remind you that no matter where you come from, or the hand the universe has dealt you, you can always choose to gift yourself the freedom to be unstoppable.

What listeners say about I Bared My Chest