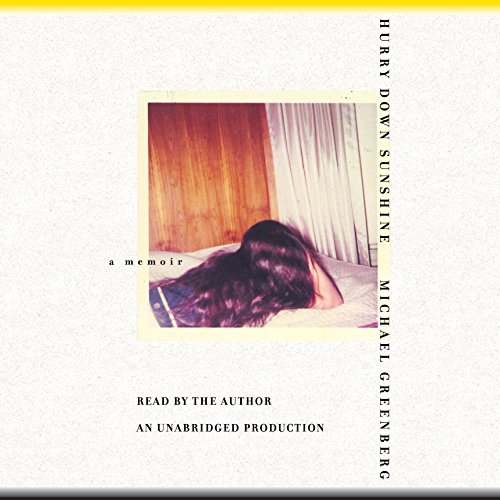 Hurry Down Sunshine tells the story of the extraordinary summer when, at the age of 15, Michael Greenberg's daughter was struck mad. It begins with Sally's sudden visionary crack-up on the streets of Greenwich Village, and continues, among other places, in the out-of-time world of a Manhattan psychiatric ward during the city's most sweltering months. "I feel like I'm traveling and traveling with nowhere to go back to," Sally says in a burst of lucidity while hurtling away toward some place her father could not dream of or imagine. Hurry Down Sunshine is the chronicle of that journey, and its effect on Sally and those closest to her - her mother and stepmother, her brother and grandmother, and, not least of all, the author himself.

Among Greenberg's unforgettable gallery of characters are an unconventional psychiatrist, an Orthodox Jewish patient, a manic Classics professor, a movie producer, and a landlord with literary aspirations. Unsentimental, nuanced, and deeply humane, Hurry Down Sunshine holds the listener in a mesmerizing state of suspension between the mundane and the transcendent.

What listeners say about Hurry Down Sunshine

A gorgeously constructed, imagistic, and lyrical account of Sally Greenberg's first manic break, this work, narrated by Michael Greenberg, is about acceptance and growth in the face of mental illness.

View behind the curtain

This personal rendering of Sally's struggle with mania is inspiring. It reveals that the journey is not hers alone, but also tangled with the journeys of her father and others in her family. Told with aching honesty in the voice of the writer, her devoted father.