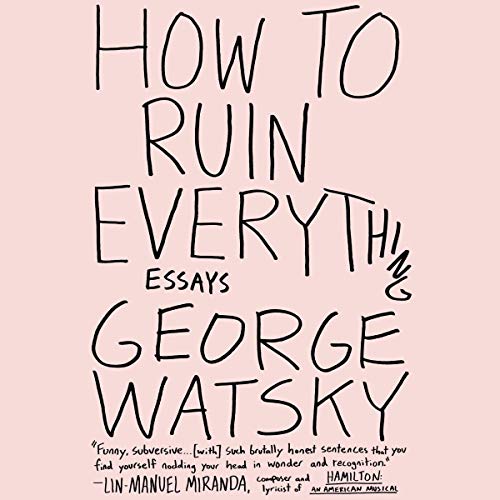 How to Ruin Everything

"Funny, subversive, and able to excavate such brutally honest sentences that you find yourself nodding your head in wonder and recognition." (Lin-Manuel Miranda, composer and lyricist of In the Heights and Hamilton: An American Musical)

Are you a sensible, universally competent individual? Are you tired of the crushing monotony of leaping gracefully from one lily pad of success to the next? Are you sick of doing everything right?

In this brutally honest and humorous debut, musician and artist George Watsky chronicles the small triumphs over humiliation that make life bearable and how he has come to accept defeat as necessary to personal progress. The essays in How to Ruin Everything range from the absurd (how he became an international ivory smuggler) to the comical (his middle-school rap battle dominance) to the revelatory (his experiences with epilepsy), yet all are delivered with the type of linguistic dexterity and self-awareness that has won Watsky more than 765,000 YouTube subscribers. Alternately ribald and emotionally resonant, How to Ruin Everything announces a versatile writer with a promising career ahead.

"Whether you're a fan of Watsky's poetry or hip-hop or a total newcomer, you will find joy in the words contained herein. Watsky in prose form is just like Watsky on a track - funny, subversive, and able to excavate such brutally honest sentences that you find yourself nodding your head in wonder and recognition." (Lin-Manuel Miranda, composer and lyricist of Hamilton: An American Musical and In the Heights)

“Watsky is a skillful lyricist who has successfully transferred his wit, humor and humility into a smartly written collection of essays. How to Ruin Everything shows off his versatility as a writer and proves that the nerdy guys can also be part of the cool crowd.” (Russell Simmons)

“George Watsky is a lyrical mastermind. Unflinchingly honest, sincere, and gut-wrenchingly funny, How to Ruin Everything is one of the best books I've read this year. Watsky effortlessly translates his razor sharp wit from the stage to the page. This will be the first of many amazing books in the life of a tireless artist.” (Hasan Minhaj, The Daily Show correspondent)

What listeners say about How to Ruin Everything

If you could sum up How to Ruin Everything in three words, what would they be?

What does George Watsky bring to the story that you wouldn’t experience if you just read the book?

It inspired me. It made me have more faith in myself that one day I could write out retellings of my own life experiences in a similar format.

This book is far from ruined. In the days since making the purchase of this book, I've only put it down when I was absolutely required. Watsky's writes in a way that feels intimate and honest. And he reads as though he's telling a story to a friend. I was looking forward to a new album some day, now I'm hoping for more books.

The book itself was great, a very enjoyable combination if essays about watsky's life.

the audiobook cements my idea that all authors should offer an audiobook read by them. his enthusiasm as he reads his memories is perfect.

Watsky is an amazing poet and author! I love this book, I enjoy his rap and was very excited to listen to this!!

Humorous collection of autobiographical essays. The “pale kid raps fast” guy is a clever writer who clearly crafts his sentences for maximum impact, and he’s got some good stories. It was interesting how similar his experiences were to my and my friends’ experiences in our 20s. Anyway, I enjoyed it but if you don’t know who he is, you can probably skip it. Grade: B

Great narration by the author.

This book was so much fun to listen to and left you with some great messages and lessons to learn.

I am a big fan of George Watsky’s music and poetry, which lead me to reading this book. Honestly it was a masterpiece, very real and relatable. I’d recommend to anyone, fan or otherwise, and let me tell you that after reading this book you’ll become an instant fan. The narration by Watsky makes the book even better!

the book is great on its own but also gives great background on a lot of his songs. I dig it

Great inside look at Watsky

absolutely love that it was narrated by Watsky himself, getting to listen to him tell his own stories

Listening to this felt as if I was relieving intimate and poetry-infused flashbacks alongside the author. Watsky delivers excellence with abundance. Both his lexical and performance prowess shine. I thoroughly enjoyed my listen!

Worth listening to again!

Weirdly relatable and laugh out loud funny. I my be bias as I like his music aswell but its full of stories I think everyone will enjoy 😊

George Watsky weaves words to create an unassuming picture, spinning us around in his memories giving a listen I'll never forget. 5 Stars.

Heartfelt, funny and narrated so sincerely.

watsky is an excellent artist, performer and writer. He explains even the most mundane story like someone stealing your food in the fridge, with charm and wit, which expresses the talent he really has with a pen.

The book though short stays with you for a long time due to the heavily relatable stories expressed in his essays and his poetry.

great stories never wanted to stop listening. if only there are more or where more

I will light the world with this tiny glowing screen

I have been a fan of the author for many years now. Listening to as much of the music he has created as possible. Hunting for work with Anderson Paak, Kate Nash and Kush Mody. Plus anything else I could/can get my hands on, that I have not yet heard before.

Ever since I heard Watsky on Table Talk, the YouTube show done by the SourceFed team. I have found his story's amazing and to hear some of them in more detail was great. Also the chance to see where some of his lyrics. I only wish there were more. I remember when this book was announced and I was hopping there would be an audio version (reading not being my strongest skill) so that I to could share in his tales, this audiobook has delivered.

On finishing it for the first time I wanted to just start and listen to it again. It was really that good. So maybe Watsky's right. "When the sun burns out we'll light the world with tiny glowing screens" and on my screen will be this audiobook. 10/10

I'm a big fan of Watsky so when I saw this book I snapped it up. Like my title suggests; it was like an extended spoken word piece by the man himself. It had me chuckling at the tropes of his life and also left me with a sense that I was with him in all his adventure but a longing to have those adventures myself.

Every minute was a lesson

How to ruin everything is an outstanding lesson in lifes learning curve. I would highly recommend this book

took me a couple of goes to finish this. I think when the mood wasn't right I just couldn't get into George's reading. but I think it was a great bunch of stories overall and I liked that he read them himself because they are such personal adventures

"How to ruin everything" is a short collection of stories from George Watsky's upbringing, early adulthood and beginnings as an artist.

The experience is like that of a good friend sharing his life's adventures at a BBQ. A BBQ being held at a poetry slam session.

His best work to date. An honest and yet thrilling exploration of a blissfully unaware model of humanity.