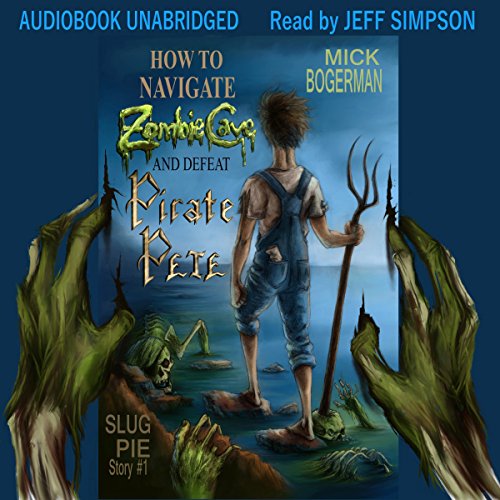 How to Navigate Zombie Cave and Defeat Pirate Pete

By: Mick Bogerman
Narrated by: Jeff Simpson
Try for $0.00

Armed with a pitchfork, miner's hat, and map, Mick Bogerman dares to hunt for pirate treasure in Zombie Cave. His little brother Finley is tied up at the beach. Literally - Mick tied him up. No one needs a little brother tagging along when you're going to slay the undead. But Mick soon wishes he'd taken some human company with him, because lurking in every corner, reaching from every crevice, is another hungry corpse. No wonder the place is named Zombie Cave! And finding treasure in the twisty tunnels is a lot harder when your map disintegrates. And man-oh-man the cold, dark tide chases fast. But the worst part about fighting off ravenous flesh-eaters is the one monster deadlier than a regular zombie... the worst of the worst... Pirate Pete.

little merit other than grossing kids out

What disappointed you about How to Navigate Zombie Cave and Defeat Pirate Pete?

A story that is all about slashing zombie brains. no imagination other than whatever sounds gross, goes in.

Narrator is fine but invokes no warm or friendly tone. Perhaps not needed for this story but not a voice I like having in my ear as my kid listens to the story