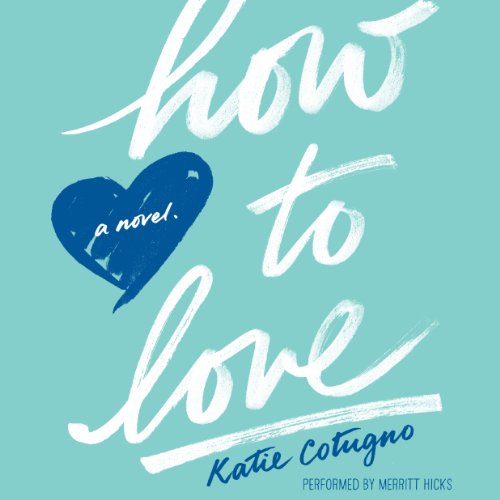 By: Katie Cotugno
Narrated by: Merritt Hicks
Try for $0.00

Before:
Reena Montero has loved Sawyer LeGrande for as long as she can remember, as natural as breathing, as endless as time. But he's never seemed to notice that Reena even exists - until one day, impossibly, he does. Reena and Sawyer fall in messy, complicated love. But then Sawyer disappears from their humid Florida town without a word, leaving a devastated - and pregnant - Reena behind.

After:
Almost three years have passed, and there's a new love in Reena's life: her daughter, Hannah. Reena's gotten used to life without Sawyer, and she's finally getting the hang of this strange, unexpected life. But just as swiftly and suddenly as he disappeared, Sawyer turns up again. Reena doesn't want anything to do with him, though she'd be lying if she said Sawyer's being back wasn't stirring something in her. After everything that's happened, can Reena really let herself love Sawyer LeGrande again?

In this breathtaking debut, Katie Cotugno weaves together the story of one couple falling in love - twice.

What listeners say about How to Love

I wouldn't recommend to YA readers

This book is in the YA genre but I would never recommend my daughter read it. I thought the relationship between the 2 main characters was destructive and negative and definitely does not provide good modelling. I did think the issue of teen pregnancy was dealt with ok but then the blend with the destructive relationship was concerning. Overall the story was pretty boring. There are so many well written ya books that deal with life and love and this was not one of them. I would give it a pass.

Love at its hardest, messiest times

I really loved "How To Love." This isn't an easy, predictable read; it's love captured at its hardest and messiest times. This book tells the story of a girl, Reena, who always wanted to go everywhere, but instead becomes trapped and goes nowhere and a boy, Sawyer, whose afraid of being left behind and takes off without a word to anyone-takes off for a very long time. After more than two years, he comes back. To say things have changed would be an understatement. Things are very complicated for him and Reena now, but then again, before Sawyer ever left there were a multitude of complications between them. Told in alternating chapters from before Sawyer left and after he returns, Katie Cotugna painfully explores love, patience, guilt and forgiveness and Merritt Hicks does a great job of narrating it all. This is my favorite kind of young adult novel-one that's well-written, authentic, emotional and will appeal to adults of all ages.

Being a Catholic girl from Broward County, I related to this story on so many levels.
The narration was superb.

And really I have to rave not just about the book but about the audiobook narration. Merrit Hicks was perfect for the voice of Reena. She also nailed Sawyer and Soledad. One of the great things she does is give you the action with the emotion - if the character is giggling, she giggles the dialogue. If the character sighs, she sighs. That can be a thing that's totally overdone - but here, it's just perfect.

I can't wait to own a physical copy of this book. I couldn't put it down and even slowed down the audio from 1.25 (which really worked for the cadence) to 1.0 for the last 5 chapters because I just didn't want it to end. I loved these characters. I loved this story. I loved this book.

I love love love it. The book is amazing and wonderful. I think everyone should read it.

Not a bad story but not my cup of tea

What disappointed you about How to Love?

I'm really not into teenage sex & pregnancy. I don't find that entertaining, interesting or attractive.

Something with great reviews LOL

It wasnt a bad book, I listened to about half of it but just didnt keep me interested. I really liked the narrator though.

What character would you cut from How to Love?

None of the characters were that bad actually.