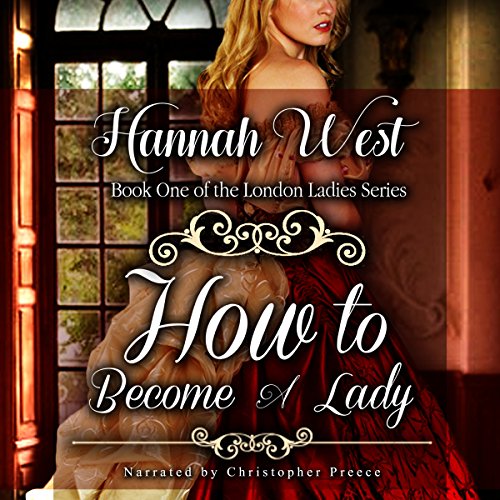 How to Become a Lady

The London Ladies Series, Book 1
By: Hannah West
Narrated by: Christopher Preece
Length: 4 hrs and 23 mins
Categories: Romance, Regency
4 out of 5 stars 4.0 (7 ratings)
This title is included in Audible Escape

How to Become a Lady

Emmaline Clarke, the daughter of a penniless baron with no influence, had been left behind once again. With her father's passing, everything was taken to pay off the debt and she had been left without a place to live. Her only hope is her sister that she had not seen in eight years, her sister that her father had disowned when she was only 14. Desperate just to have a home, Emmaline was willing to do anything, even beg for her sister to take her in.

Derek Ashford, the 18th Duke of Montrose, was a distinguished lord of the realm and was well known for being a paragon of society. He was as strait-laced and austere as a duke should be and held his duties above all else. And that 'else' included his impending duty of marriage. Derek would need to find a lady who came from good breeding, a sizeable dowry, and the manner suited to a duchess this Season. The last thing he needed was a scandal like the one his parents had created.

The first time Emma walked into a ball, she experienced something she never would have expected, and could not imagine this would be the new world in which she lived.

The first lady to capture Derek's eye brushed him off and his interest was sparked. She seemed nothing like any other lady he had encountered in his years roaming the London Seasons and she sparked something in him he didn't even know he could feel.

Could Emma be his future duchess? Or would she be the one to get away?

I'm not sure whether it was the writer or the narration but it really needed to be edited before publication. Beyond the multiple repeated passages and questionable word choice in several places, I actually really enjoyed both the story and the narrator. it would have been five stars across the board if not for those slight annoyances.

Good but missing a few things

I thought this was a good book but thought it could be better. The author skipped over some parts that could have been great such as their 3 mile walk home alone or the supper dance they shared. A lot of the physical love making was missing. I liked that they had interactions to have their love grow and there wasn’t any stupid stubbornness. The love scene was expected to be explosive and tender but was skipped over. The narrator took awhile to get used to since a lot of his sentences sounded the same in tone.