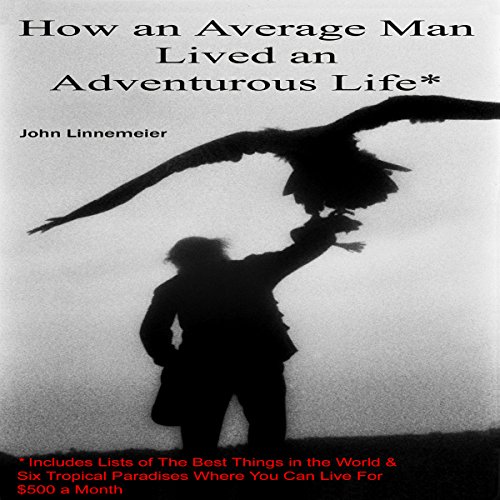 How an Average Man Lived an Adventurous Life

How an Average Man Lived an Adventurous Life

The stories in this book are all true. Its author has been held up at gunpoint at night on a road in Guatemala and shot with a machine gun in the chest and shoulder in Vietnam. He's come close to dying of thirst in the Sahara and freezing to death in the Himalayas. He's contracted malaria and typhoid fever in Ethiopia and hepatitis in India. There have been accidents involving motorcycles and automobiles. He's had close calls involving lions (twice), elephants (three times) and a rhino (once). He's visited over a hundred countries, seen revolutions, famines, wars, and panty raids, feasted in palaces and fasted in caves. He's discovered paradises, been saved by dolphins, hopped freight trains, danced with an 108-year-old woman, swam with sharks, frequented whore houses and opium dens, and met a man capable of revealing God.

In the pages of this book you'll meet the queen of the Ecuadorian prison system, the Dalai Lama, Dick Cheney, a swami from Katmandu who makes his living picking up large stones with his penis, yak herders, tunnel rats, 300 pound go-go girls, deep sea divers, drug dealers, stock car drivers, Indonesian princes, Bolivian miners, beanheads, powder monkeys, hookers and saints. Between the stories the author gives advice to would-be travelers, describes six tropical paradises where you can live comfortably on five hundred dollars a month, and includes his personal lists of the best things in the world. Mr. Linnemeier hails from the Hoosier state. Today he treads the path of moderation, living contentedly in a small town, surrounded by friends and family. He claims to have abandoned most of his previous vices, and has the stated aim of dying peacefully in bed at ninety five. In his own words, "I'm not the kind of person that men automatically defer to. I don't usually make women's hearts beat faster when they see me across a crowded room."

Average American's 100 places to see before you die

This is the competitive travel by numbers style of travel. For me travel is about the characters and interactions not how many cool destinations I can rack up. This is a materialistic list that predictably includes coffee in Paris with the Herald Tribune, Jim Morrisons grave, Spiritual excursions to India etc. If you are into a Lonely Planet style 100/1000 places things to do list this is the book for you

Told in his own voice, very naturally which just makes it soo easy to listen to.

Amazing! A must for anyone who loves to travel!

What made the experience of listening to How an Average Man Lived an Adventurous Life the most enjoyable?

The stories re-opened my love for adventure, reminded me of what is out there to discover and what we can all learn from seeing outside of the usual "box" that we live in.

The author's life experience is very colourful. You will not expect the range of tales you will come across in this book.

Very down to earth way of depicting the story.

Yes, I couldn't stop once I started listening!