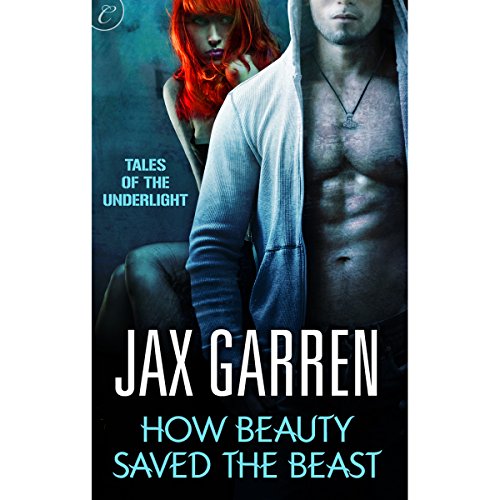 How Beauty Saved the Beast

How Beauty Saved the Beast

Jolie Benoit left her old life behind to become an agent of the Underlight. Training under Sergeant Wesley Haukon, she's honing her combat skills, all the while coping with the intense sexual attraction she feels for Hauk. She keeps their friendship casual, but when his high school sweetheart transfers into their division, Jolie finds herself grappling with jealousy.

The Underlight gave Hauk a purpose, but he can't escape his past completely. The physical and emotional scars from the fire that killed seven fellow Army Rangers will mark him forever. Jolie sends his protective instincts into overdrive, but he's convinced he'll never be worthy of her love.

Hauk is determined to keep Jolie from harm. But when the Order of Ananke ambushes them with a new weapon that neutralizes Hauk, making him vulnerable, it's Jolie who must tap into her hidden strengths to rescue him - or risk losing him forever....

Sequel to How Beauty Met the Beast.

Rated book 2 by mistake, instead of 3!

But still a good book. Listening to book 3 now. :) So glad that Hawk finally got his girl...No details included because I am a numbnut and mixed up my reviews lol

But your credits will be well spent on this series!

Its like watching an episode of your fav tv series

What made the experience of listening to How Beauty Saved the Beast the most enjoyable?

Therese Plummer did a fablous job as always!

This was the 2nd book of the underlight series. The action, the drama, the passion all roled into one.

I loved when Hawk was trying to PO "Red Hot" to make her learn how to defend herself. His reaction was priceless.

I cant wait for more by Jax and the Underlight series. I want to see how the relationships play out and who whens the battle.

I cannot TELL you guys how much I've enjoyed this series!
I adore the narrator Therese Plummer, actually bought the 1st book because she narrated it, and WOW did Jax Garren just suck me right into the world of the Underlight, and make me fall in love with Hauk!
A Steampunk Beauty & The Beast ~
it doesn't get much better than this!!

In this, the 2nd book in the series, we pick up weeks after book 1, How Beauty Met The Beast, and Jolie, our heroine who comes from REAL money & the kind of corporate greed the Underlight stands against, has joined forces with The Underlight. Jolie has always been a rebel in her family, and she's proven to Hauk and the rest of the Underlight she can be trusted, and depended on.

Hauk's feelings for Jolie have only gotten deeper, but they pretend as if neither of them is aware of the tension between them. Hauk has been training Jolie to fight with the Underlight forces ~ and while training in the gym, they kiss, and sparks FLY. But they are inturrupted so Hauk's bestie, Bowen, can tell him he has a visitor...

Jolie finds herself becomming jealous when Hauk's sweetheart from high school shows up, and begins to push at Hauk...trying to push him into making a move. But Hauk, even though he's such a big, strong, SCARY guy, is so totally unsure, and almost scared of his feelings for Jolie...so it takes quite a bit to push him into finally making his move...

In the background of the fireworks flying around Hauk and Jolie we have The Hand of Atropos, the opposing forces, trying to take Hauk out...but they don't want to kill him. No, they want to turn him into a killing machine for THEIR side...

This book was great, but I wanted it to be LONGER, and I wanted MORE of Hauk & Jolie...it's a 3 book series, and I'm already mourning the fact that there aren't more books, lol.
These books are so GREAT, ya'll. Hauk is just an amazing character, and I'm so enjoying getting to know the people of the Underlight, and worldbuilding Jax Garren has going on.

And for you audio folks out there,
GET THIS!!
Great story, amazing narration ~ it's a total WIN!!

I love Hauk -- and Jolie, of course, but what I really love is the snappy dialogue and original idea for a romance in this well written and entertaining series. Book 2 is every bit as entrancing as the first book and I hope Ms. Garren writes on and on. I especially love that this author is not following the genre's tiresome standard of each book dealing with different set of main characters -- I prefer to be able to follow the characters I love through a series of books. I wish more authors would do this, but I know not everyone feels as I do.

Couple of thoughts: One reviewer for the first book wrote: ". . . I felt a little concerned that beauty is only 17 and working in a strip club." First of all, Jolie is 24 years old, so I'm not sure if that reviewer was reviewing a different book by mistake. Also, Jolie does not work in a strip club -- she is a burlesque dancer, not a stripper, so again -- different book?

Also, there is a great new PR series that is only available on Amazon (so far!) -- it is fantastic and not to be missed. Look up: J. T. Geissinger's "Night Prowler." You can thank me later! (and no, I have no monetary interest in the sales of this series -- just doing a good deed for fellow PR fans.)

this is such a beautiful series. I can't wait for book three. the characters, the interesting storyline... the twists and turns are all wonderful.

Great Continuation of the Story

This book is the second in a trilogy. I liked that the main characters romance blossomed and got real. There were definitely some sexy scenes. I enjoyed it overall.

Better than the first!

This book continues the story of Hawk and Jolie from How Beauty Met the Beast and I think was better than the first. Not only do we get to see these two strong characters jealous over previous lovers appearance but we also get to experience the sexual tension and frustration that every one of their friends experience at their two friends avoiding each other. We again have dastardly plans by the Egyptian cult trying to take over the world but it gets a little more complicated at the end when we find out some Norse God is also involved which I'm still a little confused over. All in all a good continuation of the story, but the ending is a little more abrupt than the first book and requires a continuation to the final installment. Another excellent performance by Therese Plummer and a very fast pace enjoyable read.

I enjoyed it! I enjoy the slow love story between the two main characters. On to the next one!

Kick ass heroines are the best!

Jax Garren took the Beauty and the Beast story and got rid of the bad stuff -- Stockholm Syndrome -- and gives us a great steampunk version.

Jolie Benoit makes real, well informed decisions when it comes to her relationship with Hauk. There are similarities to the Beauty and the Beast TV shows but this is better. And the sex scenes are amazing.

I will be listening to these many times.

Amazing sequel in a promising series!

What did you love best about How Beauty Saved the Beast?

The story flowed seamlessly from the first book How Beauty Met the Beast, with sexual tension and characters that draw you in with their wit and charm.

This book introduces Hauk's high school girlfriend as Jolie's competition for his attentions. The sense of jealousy is palpable and offers further depth into Jolie's psyche as she struggles to save Hauk from a new weapon while fighting her own emotions.

Which character – as performed by Therese Plummer – was your favorite?

The book made my heart race as Jolie processed her emotions, and I laughed along with the occasionally sarcastic humor.

This was an amazing sequel, and I look forward to the next and final installment in the series, How Beauty Loved the Beast.

A winner...PNR - pure escapism.. .
The novella that introduced us to Hauk and Jolie has had me chomping at the bit for more, there is a lot of story progression here, you jump straight into the action and our intrepid would be couple are both fighting their feelings and an adversary that could eat them for breakfast, there is alot at stake. Lots of sexual tension, and personal angst, but it is handled superbly and not thrashed to death. Cannot wait for book three.
A wonderful series that lets you just escape for a bit.