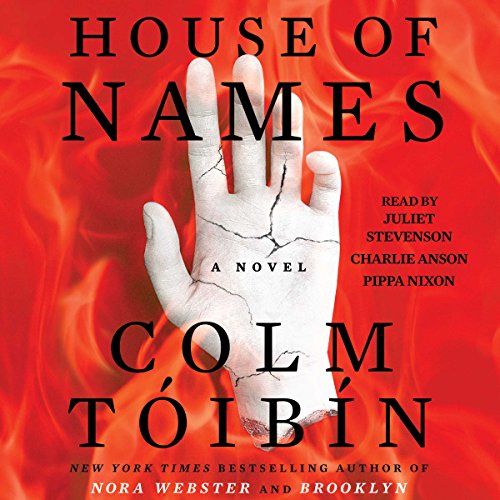 Winner of the 2018 Audie Award for Literary Fiction & Classics

From the thrilling imagination of best-selling, award-winning Colm Tóibín comes a retelling of the story of Clytemnestra - spectacularly audacious, violent, vengeful, lustful, and instantly compelling - and her children.

"I have been acquainted with the smell of death." So begins Clytemnestra's tale of her own life in ancient Mycenae, the legendary Greek city from which her husband, King Agamemnon, left when he set sail with his army for Troy. Clytemnestra rules Mycenae now, along with her new lover, Aegisthus, and together they plot the bloody murder of Agamemnon on the day of his return after nine years at war.

Judged, despised, cursed by gods she has long since lost faith in, Clytemnestra reveals the tragic saga that led to these bloody actions: how her husband deceived her eldest daughter, Iphigeneia, with a promise of marriage to Achilles, only to sacrifice her because that is what he was told would make the winds blow in his favor and take him to Troy; how she seduced and collaborated with the prisoner Aegisthus, who shared her bed in the dark and could kill; how Agamemnon came back with a lover himself; and how Clytemnestra finally achieved her vengeance for his stunning betrayal - his quest for victory greater than his love for his child.

In House of Names, Colm Tóibín brings a modern sensibility and language to an ancient classic and gives this extraordinary character new life so that we not only believe Clytemnestra's thirst for revenge but applaud it. He brilliantly inhabits the mind of one of Greek myth's most powerful villains to reveal the love, lust, and pain she feels. Told in four parts, this is a fiercely dramatic portrait of a murderess who will herself be murdered by her own son, Orestes. It is Orestes' story, too: his capture by the forces of his mother's lover, Aegisthus, his escape, and his exile. And it is the story of the vengeful Electra, who watches over her mother and Aegisthus with cold anger and slow calculation until, on the return of her brother, she has the fates of both of them in her hands.

What listeners say about House of Names

Colm Toibin is a favorite novelist, and House of Names is one of his best. His legendary characters, whose names I vaguely knew—Agamemnon, Clytemnestra, Orestes, Electra—struggle in ways that are both remote (the classical world) and current (the lust for power). The novel is filled with surprises, right until the end. The characters accept their world of unbearable violence with restraint and (often) quiet determination.

This novel is so well-written, I would want to listen again. The prose is spare and often moving. By the end, I felt like I knew the palace corridors, the sunken gardens and the barren landscape as if I’d seen a film.

The three narrators were superb. They made judicious use of silence, giving this reader a few moments to grasp the subtlety of the characters’ interactions and the shock of some of the action. Overall, a superb listen.

Would you listen to House of Names again? Why?

A friend who had just read it recommended it to me. I had no idea what it was about and had I known, I probably would not have purchased it. But it was a wonderful, gripping and educational listen and I intend to recommend it far and wide.

All the narrators did a splendid job but I am a big fan of Juliet Stevenson and enjoyed her reading the most.

It didn't make me laugh or cry. It brought alive plays I read in college eons ago and reawakened my understanding of a relevant historical period.

Toibin is a very fine writer and there is no one to whom I would not recommend this audible presentation. None of it is "hard," but I think a listener would get mesmerized by the book more swiftly than a reader.

I was pleasantly surprised by this book. At first, I wasn't sure what my reaction would be considering this is far from my normal genre of choice. But within moments I was swept away, not only by the authors words, but with the whimsical tone in which the narrator voiced the beginning protagonist. Simply put, it was like music to my ears.

I became infatuated with the authors style of prose... You hear over and over the phrase "show don't tell" when it comes to writing. However, in this case, inner thoughts and dialogue very much lead this narrative and very little physical description was used. Somehow, I was able to imagine the details just as much, if not more, because of it.

Switching protagonists (and narrators) throughout was done beautifully. It not only made the story more interesting, but allowed me to feel a deeper understanding of each character, what they felt and why they did the things they did. I think that's the biggest conflict in the story... that they didn't understand each other's motivations.

This was truly one of the most engrossing audiobooks I've ever listened to. And this is coming from someone who finishes maybe 1 out of 5 audiobooks I purchase, if that, even. There may be a lot of good books out there, but a good narrator is hard to find. A perfect narrator is even rarer and this fit the bill on all accounts.

Wonderful beginning but a disappointing ending

The re-imagination of the events in Mycenae at the start of the Trojan War and then the events following the return of Agamemnon felt too modern and revised. Very little attention is paid to the low opinion Homer felt toward Agamemnon as a soldier, a king, and a man as shown by his actions in the Iliad and by the fact that the greatest hero of the war, Achilles, had no patience for Agamemnon's greed and weak leadership. Too much attention is paid to reviling the female characters of Clytemnestra and Electra, based on no ancient source that I know of. And a key character, Leander, is an addition which appears for the first time in this retelling. There is no mention of Apollo's part nor Athena's. And Pylades has disappeared. All in all, a disappointment.

I have read several of the author's other novels and short stories. The classical Greek dramas surrounding the life of Agamemnon, his wife, daughters, and son and their part in Homer's Iliad are well known but form a very unusual setting for a modern Colm Toibin novel. I am much more impressed by this book than by any of Toibin's other works. The story is very understandable but the author's insights shine a blazing light on each of the characters and what moves each person.

Colm Toibin, masterful as always has brought this story fully present. Bravo. I listened to this as I have always enjoyed his work and just discovered the treat of Juliet Stevenson as a reader.

Started strong. There were some gripping elements to the story, but it fell flat very quickly. After listening to the whole thing, I find it difficult to even identify a plot; this seemed to be mostly a vague description of events that *might* have been an interesting storyline.

Few events or characters with any development or background provided at all. Many of the lead characters' motivations, thoughts and actions seemed inexplicable.

House of Names mostly consisted of unexplained, dramatic lead-up to events that ended up being nonexistent, anti-climactic, and/or hinted at but not described. The book didn't "end" -- it just abruptly "stopped."

There's a lot of wasted potential here. My first read from this author and it ended up being smooth, slightly monotonous narration of lovely prose to fall asleep to.

Where does House of Names rank among all the audiobooks you’ve listened to so far?

Listening to, as opposed to reading this book, adds much to it. It is in the voices of Clytemnestra, Orestes and Elektra, each read by a different reader. And it is fitting to have a Greek legend read to you as it honors the ancient tradition of how the stories were told.

If you enjoyed The Master and The Testament of Mary, you will love The House of Names. Colm Toibin outdoes himself in this work. He combines his exceptional ability to imagine the life of legendary figures and make them human by giving them a voice, as well as leaving much to the imagination in what is said and what is unsaid, as in the relationship between Orestes and Leander.

This book is one riveting, spellbinding, can’t-look-away long monologue (okay, THREE long monologues), and ten times more powerful and mesmerizing even than Tóibín’s Testament of Mary. Usually, if I’m not feeling well physically, and especially if I’m so ill that I’ve had to call in sick to work, NO reading material is transporting enough, and my only viable entertainment options are staring blankly out the window, playing mostly-mindless word games on my phone or binge-watching old episodes of Friends or The West Wing. This book was different. I didn’t have to struggle to finish it; I had to struggle to put it down long enough to take care of myself, drink tea, eat and sleep. I had no choice but to purchase the Kindle edition also just so I could continue reading in all settings even where audio not feasible (e.g., doctor’s office). Not only that, but this book turned me, a person who was frequently apparently the only person in my graduate English seminars who never cared two straws about Greek mythology (and could not even manage to convincingly pretend to care), to purchase and download the Audible version of the Oresteia so I could listen to that production next. In themes, setting and tone, House of Names is most similar to Mary Renault’s classic The King Must Die (come to think of it, is THAT book available on Audible? If so, I need to get it and re-appreciate it now), but more suspenseful, much more of a page-turner. Many thanks to fellow reviewers I follow (especially David from Stamford, Bree from Ocala, and Eric) for recommending it; if not for you, I probably wouldn’t have even known about it, much less picked it up. And you were right: the narration by all three narrators was excellent, although Juliet Stevenson as Clytemnestra was sublime and the clear standout, as always. Bravo. A+

Overall I enjoyed the audio. However I couldn’t help thinking of the Orestia as I listened to the story unfold. The only disappointment was the way it ended. There was no trial, there was no prosecution from the Furies and no testimony from Apollo or Athena. I think that had the Gods been a part of the book then it would have been a five star knockout. Overall Orestes comes out like a weak emasculated character. But I did enjoy the book and the narration was fantastic!