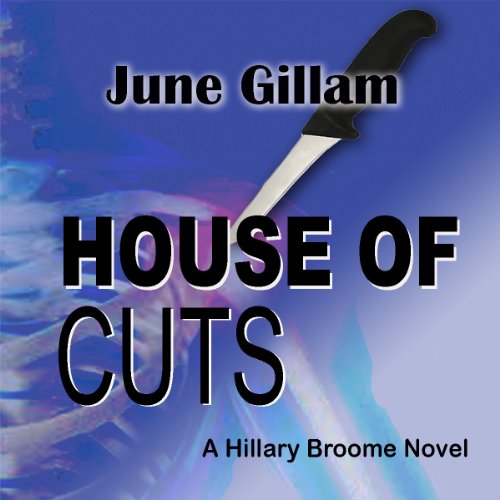 By: June Gillam
Narrated by: Ginny Harman
Free with a 30-day trial

When bodies of dismembered managers turn up as superstore displays, reporter Hillary Broome's articles on the grisly murders catapult her byline from California into the national limelight and threaten to expose a shameful secret that could ruin her career-as well as bring her to the crazed killer's attention.

Hillary has to connect up with detective Ed Kiffin in a race to catch the insane cutthroat before he tortures and kills a woman who's begun to fill a void in Hillary's heart left by the mother who abandoned her years ago.

“ House of Cuts builds towards a powerful climax, reminiscent of Silence of the Lambs.” (Susan Rushton, columnist for the Auburn Journal)
“Would make a great movie!” (Zoe Keithley, Story Workshop® master teacher)

What listeners say about House of Cuts

A most engaging mystery!

Hillary Broome, a reporter for a California paper, lands in the middle of a serial murder investigation. The murderer is targeting managers of big box stores and leaving their bodies in disturbing positions. Detective Ed Kiffin reluctantly teams up with Hillary to try to track down the killer.

This was a fun fast-paced murder mystery. I quickly became invested in the characters and even came to understand the killer’s motives (even as I don’t condone his actions). The point of view switches from Hillary to Ed to the killer throughout the story.

Hillary has some parental issues as her father recently died and her mother abandoned both of them when she was quite small. She recently left a bad relationship back east and she has some secret from that time period she doesn’t want her current colleagues to know about. Detective Ed is also an interesting character. He knows he should give up smoking but still can’t do it. His wife left him after their daughter died in an unsolved hit and run accident.

Initially, I wasn’t sure who the killer was even though we get to ride around in his head. As the story moves along it becomes apparent who it is to me as the reader, but I still quite enjoyed watching Hillary and Ed try to figure it out. It’s obvious with the first body that the killer has some experience butchering large animals. So the police suspect he is perhaps a hunter or a professional butcher. I really appreciated the few accurate butchering details the author included, which made the plot that much realer.

The suspense winds up as Hillary pieces the clues together and decides to follow her guesses. She has a need to make sure her new friend is OK and ends up confronting the killer. Honestly, I was biting my nails at this point since Ed and the police force seemed pretty behind on the chase. I was very pleased when Hillary had a hand in saving the day even as the police finally showed up. It was a fun, sometimes intense, story and I look forward to more Hillary Broome novels.

I received a copy of this audiobook from the author (via iRead Book Tours – thanks!) at no cost in exchange for an honest review.

Narration: Ginny Harman was a good pick for this book. She had clear, distinct voices for all the characters. Also, her male voices were good. There was even a little singing that was done well.

House of Cuts - Suspenseful and Engaging!

Would you listen to House of Cuts again? Why?

I greatly enjoyed the story June Gillam presented in "House of Cuts," but I am not the kind of reader who rereads books, audiobooks would be included in that.I have so many more books, ebooks, and audiobooks in my library and so many more being launched and in-progress by my favorite writers that I generally do not go back to a book I've already read. This is in no way a statement against this story...I really enjoyed June Gillam's work.

What was one of the most memorable moments of House of Cuts?

The memorable moment in "House of Cuts" was more the most eerie...creepy. The killer's description about preparing a chicken. It was well-written and Ginny's voice gave this mundane skill and made it worthy of a Stephen King film...

Which character – as performed by Ginny Harman – was your favorite?

Ginny Harman did an excellent job with all the characters, but it was creepy, eerie, almost nightmarish to hear the deep tone she took with the 'killer.' The killer's descriptions and anger made disturbing by her ability to provide a slow, deep tone. Chills down my back!

All in one sitting...I tried it. It was hard to stop to deal with some chores and family demands, but the second I was finished, I plugged back in eager to finish the story. It was definitely engaging!

This is the first book in the Hillary Broome Mystery series offering an extremely engaging story. The first couple of chapters sets up the gruesome murder and motive, but leaves the killer’s identity still hidden allowing a few different possibilities for readers to sort out for themselves. However, it does become clear and the reader sits poised on the edge of their seat fearful that someone else is about to become the next ‘head’ line. The narrator Ginny Harman is excellent with vocalizations that move perfectly from female to male characters, professional to quirky styles, light to eerie, very eerie.