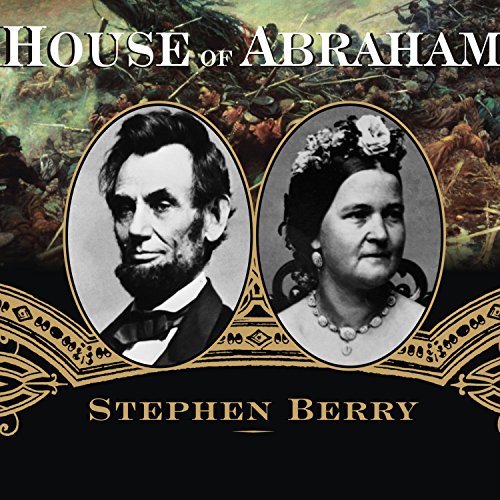 Lincoln and the Todds, a Family Divided by War
By: Stephen Berry
Narrated by: Michael Prichard
Length: 10 hrs and 2 mins
Categories: Biographies & Memoirs, Historical
4 out of 5 stars 4.2 (58 ratings)

By: Stephen Berry
Narrated by: Michael Prichard
Free with a 30-day trial

A rising star among historians charts the fortunes of a family shattered by the Civil War - Mary Todd Lincoln's family - and their surprising impact on how Lincoln fought that war.

For all the talk of the Civil War "pitting brother against brother", until now there has never been a single book that traces the story of one family ravaged by that conflict. And no family could better illustrate the personal toll the war took than Lincoln's own. Mary Todd Lincoln was one of 14 siblings who were split between the Confederacy and the Union. Three of her brothers fought, and two died, for the South. Several Todds, including Mary herself, bedeviled Lincoln's administration with their scandalous behavior. The award-winning historian Stephen Berry tells their family saga with the narrative intricacy and emotional intensity of a novelist. The Todds' struggles haunted the president and moved him to avoid tactics or rhetoric that would dehumanize or scapegoat the Confederates. Drawing on his own familial experience, Lincoln was inspired to articulate a humanistic, even charitable, view of the enemy that seems surpassingly wise in our time, let alone his.

With brio and rigor, Berry fills a gap in Civil War history, showing how the war changed one family and how that family changed the course of the war. As they debate each other about the issues of the day and comfort each other in the wake of shared tragedy, the Todds become a singular microcosm and a metaphor for the country as a whole.

What listeners say about House of Abraham

Very much worth the purchase price and it really shed a lot of light on the entire Todd family and their relationships both with each other and with Lincoln. If you are looking to get a broader understanding of what faced Lincoln, and indeed the country as a whole, on a more personal level this is the book for you.

I was pleasantly surprised by this book. At first the narrator put me off, reading like a first-grader. But the tongue-in-cheek manner in which the author tells this story kept me interested until the narrator finally got his chops together. I've read dozens of accounts of the Civil War and Lincoln. However, this story gives the reader a whole new perspective on that time in history, along with a President that everyone thought they knew. His wife's family's story is extremely intriguing. With 14 siblings from two mothers, there's no surprise that the family took sides in the war, particularly growing up in Kentucky which was really neither north or south in the conflict. What makes this a really great read is Stephen Berry's hilarious way of storytelling. In explaining the Todd's white-glove snobbishness on its slaves whom they claimed to "part of the family" rather than chattel, Berry states "(The Todds) never beat their slaves. Instead they sent them downtown to the jail to be beaten, by professionals". As an African-American, I could only laugh at the ridiculousness of the family's alleged values. After the war, one of Ann Todd's sisters chose to leave her children's black nurse in the south rather than free the servant as required after returning to the north. This, in spite of her brother-in-law, the nation's embattled President, risking it all in a war to free the country's enslaved people. The book is amusing, sardonic, sarcastic, witty, and extremely well-researched. It flows in a way which makes it hard to put down.

I'm a huge Lincoln buff, so I was excited to read about this side of his life. However, he featured fairly little in it. The rest was just piecemeal, each family member described without much attention on connections between different members. I felt I was reading about this person or that person, but not an interconnected and dynamic family unit.