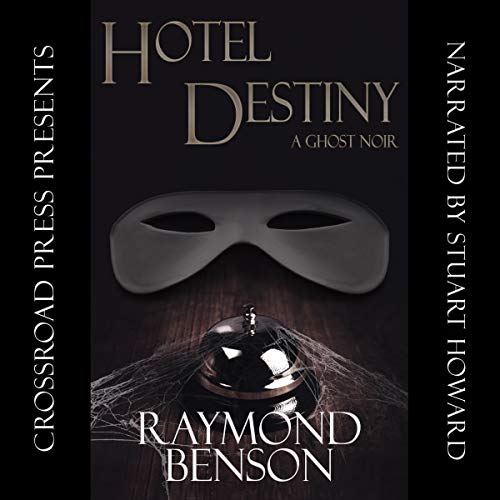 By: Raymond Benson
Narrated by: Stuart W. Howard
Try for $0.00

What if you, as a ghost, had to solve your own murder?

From internationally acclaimed and New York Times best-selling author Raymond Benson comes a novel that is a ghost story with a distinctive noir sensibility mixed with David Lynchian surrealism.

The year is 1985. Manhattan’s Times Square area is sleazy, and the streets are full of what Coleman Sackler calls “New York Street Skunk”. Cole is the night manager and self-proclaimed hotel detective for the transient Hotel Destiny, which has been plagued with scandals over the century, including several murders, gangster occupation and ownership, and fleabag status during the 1960s and '70s. Five recent slayings in the building have been attributed to - the police believe - one killer.

During the gala grand reopening Halloween party, Cole Sackler himself is murdered by a masked man. But hold on! Cole “awakes” and is still in the hotel - as a ghost. Prior to his death, a mysterious woman had told him that hidden portals located throughout the building can lead one to other time periods, and that the key to Cole’s destiny is in the hotel’s past and embedded in its many secrets.

Thus, Cole’s spirit sets out to solve his own murder by dropping in on living characters throughout Hotel Destiny’s history and observing and/or interacting with them. His goal is to discover the identity of his killer, as well as learn the ironic truth about his own family, his heritage, and himself!

What listeners say about Hotel Destiny

The story had a somewhat different theme for a murder mystery. That’s why it appealed to me.
It was well narrated and easy to follow the characters by their voices.

Like the best mysteries, Hotel Destiny will keep you guessing...what do you know? Writer & Narrator are a great team, whirling us through time.

Okay but suffers from some flaws in execution

A very interesting premise with what could have beet a great twist if the whole thing were better executed. Unfortunately it wasn’t and scenes dragged with repetition and endless re-statement of some already established facts while confusingly not bothering to establish any clear reason for others. Exposition was frequently heavy handed or awkward and you could see the twist coming from miles away. It was not a waste of time, I enjoyed it for what it was and would not wish to discourage anyone else from giving it a try, it could be that I am being much too picky, but it was disappointing to me that it could have been great but was merely okay instead.