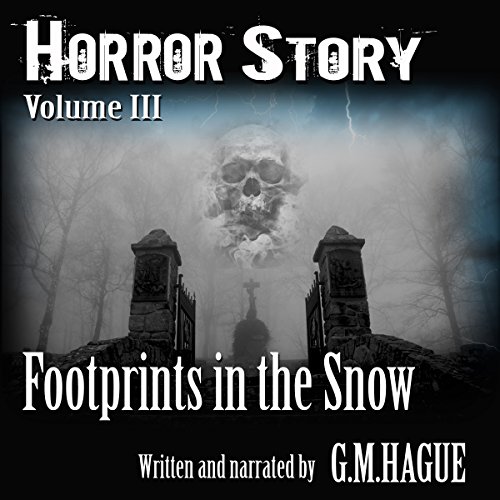 Emerging from the winter storm, it appeared to be a sanctuary, shelter from the freezing blizzard and the ravages of a desperate, final battle. But instead, the beckoning gates of the mysterious abbey are the entrance to a different kind of hell. The frightening shadows and maze of confusing hallways and rooms conceal things much more terrifying than the enemy beyond the walls. Sergeant Muller and his German Army platoon have witnessed countless horrors since the start of the war, but they still don't believe in ghosts or the dead returning from the grave. That's all about to change.

I have listened to other books by G.M. Hague and remember really enjoying hearing him read his own book as he is intimate with the story and that comes through as he tells it. This one was the same. I think the story was definitely better being read by him. I also really enjoy his accent and since his voice is calm and soothing I could listen to him read most of the books I listen to.
I wouldn’t call this story horror. It is more like a historical fiction with a slight paranormal twist. That doesn’t mean that it is a bad story, just don’t come looking for a full on horror story. I did enjoy the book but thought it was a bit slow to get to what I would call the horror aspects of it. Like the other books in the series this is a stand alone story so no need to listen to the previous volumes to understand what is going on.
I was voluntarily provided this free review copy audiobook by the author, narrator, or publisher

This is the first book I've listened to by G.M. Hague, but it won't be the last! This is a great book and the narrator did a great job.

I greatly enjoyed this book even though it was quite slow at the start. G.M. Hague explains in a forward to this book that he isn't going to affect any accents in his narration for the German soldiers. His explanation made perfect sense. That said, I found it very distracting to try and remember that I was hearing a story about German men and French women while listening to a (very strong) British accent tell it. As a film maker/story teller, I think it just would have been a better choice to hire a different narrator.

Once I got used to the weirdness of the narration accent, I thought this was a really interesting story. Hague takes a common trope (people not leaving when things get scary) and turns it on it's head by making it impossible for them to leave. I love who turns out to be the villains (no spoilers!) and how it ends. This is a period piece horror story that I would recommend to anyone who doesn't mind the wrong accent narrating the tale and who enjoys historical horror! I was voluntarily provided this free review copy audiobook by the author, narrator, or publisher.

Supernatural tale in an old Abbey

If you could sum up Horror Story: Volume III in three words, what would they be?

Meuller. The badass seargent of the Wehrmacht unit. He was portray well; not just the usual ultra evil streotype (though he was that too!) but his character was well developed and the reader could understand the "logic" behind his decisions against the backdrop of the Ardennes offensive.

The end... Don't want to spoilt it, but the end of the book was great.

In this Abbey... Pray for death.

This was a rather large short story, definitely a novella. It was a little slow in parts, but that helped develop the characters well. It was a genuinely unsettling story. I really enjoyed listening to it.

I was given this free review copy audiobook at my request and have voluntarily left this review.
&quot;Footprints in the Snow&quot; the third book in the Horror Story series by G.M. Hague is a true ghost story that takes place in France during the Battle of the Bulge. The true protagonist is the convent that lures wary soldiers into the folds of what they hope will be a sanctuary and turns out to be their worst nightmare. The story revolves around a decimated platoon of German soldiers who is looking for a safe place to wait for reinforcements, surrounded as they are by enemies' forces. The convent, appearing as an unexpected mirage to starved, tired, and freezing soldiers in a winter landscape, becomes their hope for survival. Little they know that the horrors inside the convent's walls are more terrorizing than the horrors of war. A suspenseful and well written book, superbly performed by its author, is a must read. I particularly appreciated the fact that the author opted not to use forced German accent in his narration, an annoying aspect of many narrators that feel the need to give foreign accents to protagonists from other nationalities, when in reality there would be no need for it, something that has always bothered me. Great job!

I enjoyed listening to this entry in Hague's Horror Story series. The author did an excellent job of setting up the period and tone which only enhanced the &quot;creep&quot; factor of later events. Some of the characters are a bit irritating, but I think that was the point.

Footprints in the Snow by G.M. Hague was a good read. This is a horror story that is set in 1944 during the war. The German soldiers seek refuge in a church, but the men of the patrol start to die. This was a good read.

This is a good, not great read.A typical 'people are stranded and need to take shelter then people die' type of horror book.Nazis are caught in a snowstorm and take shelter in a convent that doesn't show up on maps.A lot of questions arise before the truth is known.Mr Hague is a fine narrator.“I was given this free review copy audiobook and have voluntarily left this review.&quot;

The story is very slow. The first two thirds of the book doesn't have anything significant happening. It's a slow build-up for the last part of the story. The climax has some meat in it, but by then I'm already tired. I wish there were some more action in the book.

The narrator's voice was clear and each character had distinct voice.

I would definitely call this book more of a paranormal historical fiction book, rather than a horror story. It was definitely creepy at times and I thought it was interesting to hear the author read his own book. I also found myself having a difficult time relating to Sgt. Muller and his platoon of Nazis. I mean, considering the atrocities the Nazis did during WWII, there was no relate-ability to me. I think it would have been more impactful if they were Allied soldiers.