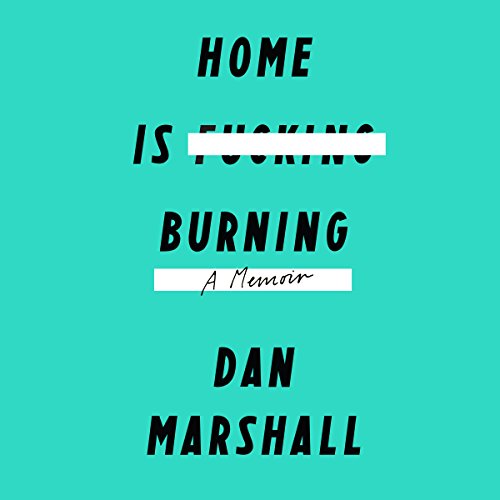 For the Marshalls, laughter is the best medicine. Especially when combined with alcohol, pain pills, excessive cursing, sexual escapades, actual medicine, and more alcohol. Meet Dan Marshall - 25, good job, great girlfriend, and living the dream life in sunny Los Angeles without a care in the world. Until his mother calls. And he ignores it, as you usually do when Mom calls. Then she calls again. And again. Dan thought things were going great at home. But it turns out his mom's cancer, which she had battled throughout his childhood with tenacity and a mouth foul enough to make a sailor blush, is back. And to add insult to injury, his loving father has been diagnosed with ALS.

Sayonara LA. Dan is headed home to Salt Lake City, Utah. Never has there been a more reluctant family reunion: His older sister is resentful, having stayed closer to home to bear the brunt of their mother's illness. His younger brother comes to lend a hand, giving up a journalism career and evenings cruising Chicago gay bars. His next younger sister, a sullen teenager, is a rebel with a cause. And his baby sister - through it all - can think only about her beloved dance troop. Dan returns to shouting matches at the dinner table, old flames knocking at the door, and a speech device programmed to help his father communicate that is as crude as the rest of them.

But they put their petty differences aside and form Team Terminal, battling their parents' illnesses as best they can when not otherwise distracted by the chaos that follows them wherever they go. Not even the family cats escape unscathed. As Dan steps into his role as caregiver, wheelchair wrangler, and sibling referee, he watches pieces of his previous life slip away and comes to realize that the further you stretch the ties that bind, the tighter they hold you together.

What listeners say about Home Is Burning

I loved this book so damn much. I didn't realize something could be so sad and hilarious at the same time. Really a wonderful, beautiful story. Lots of fart jokes, lots of heart.

He does a great job performing as well.

I'd highly recommend this puppy.

Loved his honest writing about an awful disease. Loved having the author narrate for a real taste of what his life was like. Loved having great belly laughs along with tears of sadness. We all cope in our own ways and this was real to me.

Self-indulgent ... and not very likeable

Maybe immature would be the best description for this story of an entirely immature and not very likable family, with a vocabulary pretty much limited to expletives, trying to share something important with us about caring for a dying father. With plenty of money and access to medical care, travel and alcohol, the family copes in its own dysfunctional ways. I'm sure it was awful to lose a parent in that way, but I found this memoir to be neither funny nor enlightening.

Brutally honest and often funny book about a family losing their father to ALS. Maybe a dark sense of humor is required to appreciate the book.

Great story and a great memoir, not for people that get offended by the fuck.

A beautiful heart felt story about a family dealing with unimaginable circumstances. The description of each family member is heart warming and you connect with them on personal level. You want and wish for happy ending.
Beautiful narrated by the author.

You will laugh and cry in equal measure. I feel less alone with my grief.

Deep into this deeply depressing life story/family implosion, the Author spends nearly an entire chapter musing through an endless list of ‘what if’ questions. I wanted to scream STOP! Author and obviously believes these are pertinent, but all they do is affirm his self-indulgent attitude.

When I first started listening to this book it was too much. The author standing like a spoiled wealthy millennial brat brat.

So I stopped listening. For a month or so. Then in my commute I picked it up again.

My wife has been battling cancer for 20 years. I’ve been treated for prostate cancer now for about a year with surgery followed by radiation.

We have three kids ages 21 to 25 so in a way I can really relate to the story. And they give me the perspective of the kids.

Underneath all the swearing and the off-color irreverent jokes is very pure heart and a tremendous amount of compassion.

It ended up being one of my favorite all-time books.

He said it well when he said “when it comes down to it family is all that you have in life, I love you all very much and I’m so proud that you are my family. “

I loved this story. I just lost my mom to cancer so it fit me and my family. And the language let's just say we must be related! lol Great book guys I cried and I laughed out loud so much my family told me to shut up countless times.