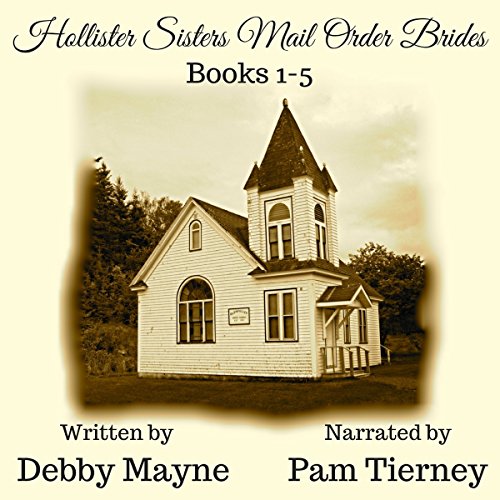 By: Debby Mayne
Narrated by: Pam Tierney
Try for $0.00

This is a box set of all five of the Hollister Sisters Mail Order Brides historical Christian romance stories. Sisters Julia, Lenora, Mary, and Sarah move west to Colorado to find love. Their father John follows a few years later.

Julia is the first sister who is sent to Colorado after her father realizes he can't support all of his daughters. Stone Michaels has become a successful rancher. He has everything he wants, except for one thing: a family. Will Julia willingly marry Stone, or will she return to her home in Virginia alone?

When widow Lenora runs out of money, she turns to her father for help. He starts communicating with members of a church in Colorado who are looking for a mail order bride for their pastor. After Jesse Grant lost his wife and two children in a fire, he has tried to make his way through life for the past couple of years. When Lenora arrives in Colorado as a mail order bride, she is shocked to see how surly Jesse is. Can these two people ever come to terms with their grief and find love with each other?

Mary Hollister never thought she would marry, but after she loses her job as governess for a wealthy family, she winds up being a mail order bride for Lester Packard, a man who moved to Colorado during the Gold Rush. The problem is, Mary isn't drawn to the crusty man she's married. Is it possible for Lester's heart to soften and Mary to warm up to the rancher who doesn't know how to treat a wife?

Sarah Hollister, the youngest of four sisters, moves to Colorado to become a mail order bride when her father can no longer support her. Her intended, Marvin Olson, has no intention of sending off for a mail order bride, but his brother Oliver has other ideas. Sparks do not fly at first, but after a series of disasters, everything changes. Is it possible for these two seemingly mismatched people to find love?

After widower John Hollister's daughters become mail order brides, he moves out to Colorado to be near them. Loneliness overwhelms him, prompting him to send off for his own mail order bride. His youngest daughter's disapproval stalls his wedding, sending everyone into a family dispute. Can John and his intended, Viola, ever find a way to be together?

This is a good Clean boxset with clean western christian stories. Pam Tierney did a good job narraiting these stories. This was my first time listening to her.

The first book with daughter Julia was really good I really enjoyed that one. Even though the father John said he could no longer afford to take care of Julia it was only the first time I had heard it so it sounded plausible. The second book with Eleanor is also really good, but win againJohn says he couldn’t afford to take care of Eleanor and her son Andrew I was getting a little more skeptical and then there was Mary. She was let go as a governess from her position and given a good some of money for trouble, money in which she gave John. It made no difference he still claim we could not afford to support Mary and the youngest sister Sarah. And then last but not least there Sarah just her and her father live in the house and she cooks as best you can for him and cleans and yet he says he cannot afford to take care of her and when he finally gets rid of Sarah and center to Colorado he also tells her that if they lower his pay any more he won’t be able to feed herself. I found this plot line very unbelievable and I know it was just a means to an end, but I thought she could’ve came up with something better than that. Now, other than that I thought the stories were really good and I love the way they all were in love when they got married and how with Sarah it was her who wanted to marry and Morgan was undecided. All in all this was a pretty good book.

love all 5 books, short abd sweet. will look for more audible books by this author

Mail-order-brides are enjoyable when limited to one bride, however, following an entire family who apply as brides out of necessity is heartwarming. These 5 books follow the Hollister family (4 daughters, late teens to early 20s) who lose their mother and are unable to find jobs to help support the family, as jobs are already scarce for men, let alone being female. Their father struggles with supporting them, yet wants to make sure they will be taken care of, now and future. Therefore, mail-order-bride option.

However, he fails to tell them each time he has applied and procured them a place and person to go to as a bride. This story follows each of the 4 daughters and the 5th book (I don't want to give any spoilers) concludes the family, wink-wink.

These books are good reads, innocent and fun. I would recommend and will listen again.