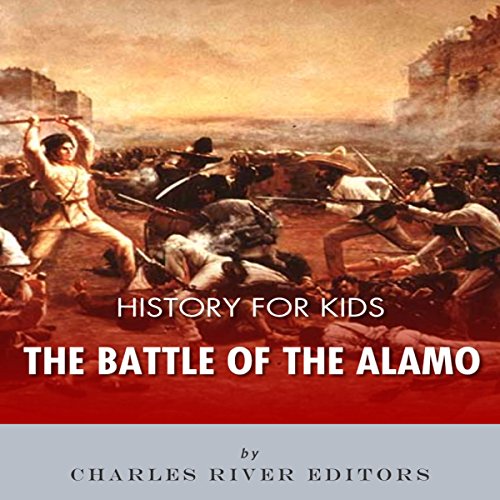 History for Kids: The Battle of the Alamo

By: Charles River Editors
Narrated by: David Zarbock
Try for $0.00

"I shall never surrender or retreat. Victory or Death." (William B. Travis)

In Charles River Editors' History for Kids series, your children can learn about history's most important people and events in an easy, entertaining, and educational way. This concise, but comprehensive, audiobook will keep your kid's attention all the way to the end.

For the United States, the Battle of the Alamo is in many ways its version of the Greeks' Thermopylae. In February 1836, a few hundred defenders of a small fort, which once served as a mission, found themselves besieged by several thousand Mexican soldiers under Mexican General Antonio Lopez de Santa Anna. Rather than withdraw, the defenders requested reinforcements and made a determined stand at the Alamo, eventually falling down to nearly the last man on March 6, 1836.

Like Thermoyplae, much of the narrative regarding the Battle of the Alamo is comprised of myths and legends that have been embraced, supported, and protected, turning the most famous defenders into American legends. Accounts are also wildly contradictory. Davy Crockett, the famous frontier hero who has been portrayed by none other than John Wayne, may have been among the last to die - or may have been captured and executed shortly after the battle. William Barret Travis, who had abandoned his wife, son, and unborn daughter and departed for Texas, did not draw the fabled "line in the sand" with his sword and ask those who wished to stay with him in the Alamo to cross it. The number of defenders was almost certainly not the 189 long held sacred by the Daughters of the Republic of Texas.

However, much the same way accounts of Thermopylae are hard to confirm, to a large extent the actual results of the Battle of the Alamo don’t matter as much as what the Alamo has come to symbolize.

What listeners say about History for Kids: The Battle of the Alamo