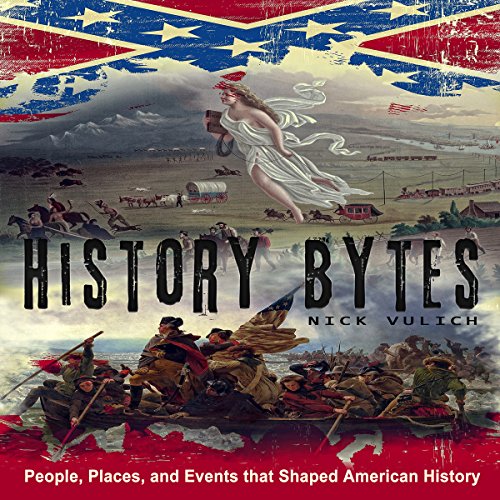 By: Nick Vulich
Narrated by: John McBride
Try for $0.00

The truth is that much of what we learn about history is a series of little white lies that over time have grown into tall tales.

George Washington didn't really walk around with a mouthful of wooden teeth. Those are real teeth and pearl inlays in Washington's dentures. A recent study by Mary Thompson suggests Washington experimented with early dental transplants. He purchased replacement teeth from his slaves for 13 shillings (roughly $50 in 2015 money).

Another truth every schoolchild learns early on is Paul Revere was a great hero of the revolution and saved the day by alerting the minutemen at Lexington and Concord that the British were coming.

It's true. Paul Revere made a midnight ride, and he spread the news about the British advance on Lexington and Concord, but the fact is Revere never completed his ride. And here's another fact hardly anyone knows. Revere wasn't the only one to make that ride. A second rider, William Dawes, set out by land at the same time Revere rowed across the bay to Charlestown.

And one of the biggest hoaxes ever played on Americans occurred during the 1930s and early 1940s. FDR had polio and could barely walk, yet during his presidency most Americans had no idea the president was crippled.

American history is full of strange paradoxes, and that's one of the things that make it so interesting.

Would you listen to History Bytes: 37 People, Places, and Events that Shaped American History again? Why?

Yes, I always miss something the first time around

I the out of the way history and the narrator

No particular scence, just the different parts of history I did not know

SOMETHING FOR EVERY HISTORY FAN

What did you love best about History Bytes: 37 People, Places, and Events that Shaped American History?

Lots of very entertaining short stories, compiled in a way that makes it easy to jump around. It's in chronological order, but you can listen to the "bytes" out of order as they're all complete in themselves. Enjoy listening to a whole story or two on the way to work or when you're out shopping. Great for the "armchair historian" or even the casual, non-history buff listener.

Well-written, with interesting insights into little-known facts about American history. The narrator does a great job of bringing the stories to life. He reminds me of a passionate teacher in school, who really wants to make history entertaining and enjoyable. Nice and clear, strong but not overwhelming, with some characterizations that reminded me of the Walter Cronkite program, "You Are There."

Have you listened to any of John McBride’s other performances before? How does this one compare?

I downloaded John McBride's bio about Sean Connery, so I already knew that he was a fine narrator who does some good impressions. He really knows how to hold a listener's interest.

The chapter on Lincoln's assassination was striking, and helped me to realize that this tragic event is the "hub" around which all American history revolves. The event is as relevant today as it was 150 years ago.

This audiobook is a great value, with more than four-and a half hours of stories that seem to go by quickly. Teachers and parents should download this collection of stories to help get kids more interested in the events that have made this country what they live in today.