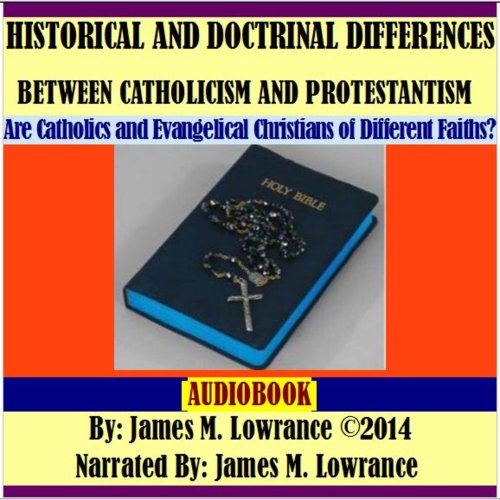 Historical and Doctrinal Differences Between Catholicism and Protestantism

Historical and Doctrinal Differences Between Catholicism and Protestantism

Within the chapters of this book, I wish to point out some of the central beliefs and historical characteristics of both the Catholic and Evangelical Christian churches. I will keep my discussion centered on major doctrines of each, due to the fact that both churches have a number of variations within their denominations and it would take literally volumes to go through each of these. The number of denominations within the evangelical churches, also sometimes referred to as the fundamental Christian denominations, number in the 1,000s and while the variations in Catholic denominations is far less in number, there is considerable variance in beliefs between them as well.

It is my hope that none of my discussions that follow are perceived as an attack on either Catholics or Protestants because that is certainly not my intention. I do however recognize that many believers in the Holy Bible are in question today, as to how these different churches and denominations came into being and why they have such stark differences in beliefs between them, in many areas of faith and worship practices.

Some Christian church history has been somewhat stifled over the past decades or even over the past couple of centuries. This is partly due to the fact that there are some very unpleasant historical events that have transpired and many believers from whichever side of doctrinal beliefs they may be on would prefer to forget them and to simply move forward in their Christianity. This however, cannot be done in actuality because the differences between the two main Christian churches, being that of Catholicism and Protestantism, are vast and remain in great contrast, to this day, Because of this, the past history of these two major denominations will continue to be referred to both doctrinally and historically.

When one cares to consider these and other reasons as to why Catholics and Protestants exist, it is difficult to do so, without delving into the history of how each evolved. In some ways, it is essential to making a decision as to which faith one chooses to receive and adhere to.

For most of us who are Christians, our faith beliefs in God are the most important thing in life to us and we desire to know what these beliefs actually represent and how they were passed-down to us by the forerunners of our faith. It is my hope that the chapters following, will help, at least in-part, to accomplish this for the readers of them.

The Word “Catholic”, ”Christians” and other Names for Believers in Christ in the New Testament

The Authority of God’s Word