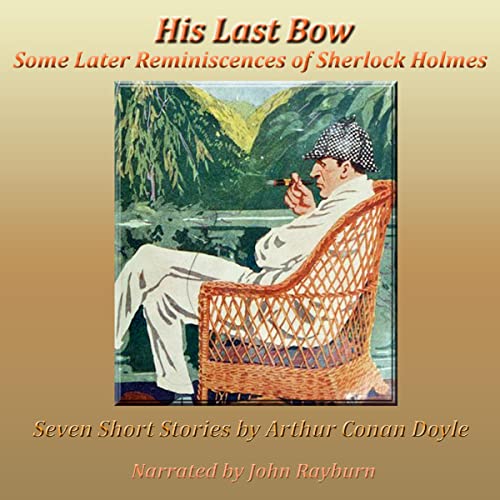 Altogether, Arthur Conan Doyle wrote four novels and 56 short stories about Sherlock Holmes. Throughout, Dr. Watson (or just Watson) was included as a catalyst for Holmes’s massive ego and mental processes. Eventually, Doyle felt the stories were distracting him from more serious literary work, but he did finally wind it up with the seven stories you’re about to hear. In the words of Watson (Dr. John H. Watson, MD), we have the pleasure of knowing about the declining years, beginning now.

The friends of Mr. Sherlock Holmes will be glad to learn that he is still alive and well, though somewhat crippled by occasional attacks of rheumatism. He has, for many years, lived in a small farm upon the Downs five miles from Eastbourne, where his time is divided between philosophy and agriculture. During this period of rest he has refused the most princely offers to take up various cases, having determined that his retirement was a permanent one. The approach of the German war caused him, however, to lay his remarkable combination of intellectual and practical activity at the disposal of the Government, with historical results which are recounted in His Last Bow. Several previous experiences which have lain long in my portfolio have been added to His Last Bow so as to complete the volume.

What listeners say about His Last Bow